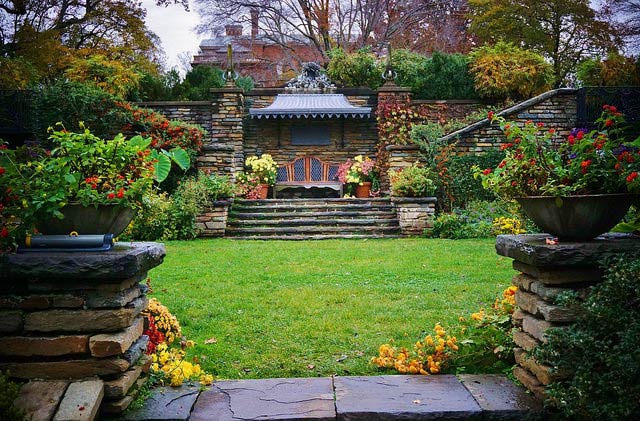 I must say that as I started reading about women in horticultural history, it was much easier to find articles and books about women who designed gardens than those who made breakthroughs in the areas of science. But that, I am sure, is due to the lack of opportunities afforded to women in schooling at the turn of the twentieth century. The women designers seemed to be able to sneek in under the radar because design and arranging “pretty plants” was was more appropriate for women as far as hobbies were concerned. But these women who took to designing gardens were doing more than “arranging.” They were studying botany and soil along with drafting, quite often on their own at first. Many were headstrong women who learned how to orchestrate relationships with wealthy people as well as design beautiful gardens. One woman who was at the forefront of women in landscaping in America was Beatrix Cadwalader Farrand. Though only a few of her notable gardens survive to this day, she made a great impact in her time.

Though Beatrix Cadwalader (Jones) Farrand (June 19, 1872 – February 28, 1959) was born into a well to do family in New York City, she also spent many seasons in her family’s country home surrounded by gardens and wild flowers. I can’t help but think that the juxtaposition of city achitecture and arts and the freedom and natural beauty of the countryside being firmly imprinted on her at such a young age must have influenced her desire for creating structured outdoor spaces.

In 1893, at age 20, Beatrix went to study under Charles Sprague Sargent, a botanist and one of the founding members of the Arnold Arboretum in Massechusetts. In addition to botany, she also studied landscape gardening (an informal art at the time with no specialized school available) and land planning with Sargent. Having a firm grasp on plants, Beatrix also enrolled at the Columbia School of mines to learn drafting, elevation rendering, surveying and engineering. By 1895 she was ready to begin her career as a landscape architect.

She started her career from her mother’s home in New York City. This proximity to prominent people probably helped catapult her work but it was her natural charm and extensive knowledge that cemented her prominence in the field of lanscaping. Within three years of her start she became one of the original eleven founders of the American Society of Landscape Architects and the only woman.

During her career, Beatrix Cadwalader Farrand was involved in many significant projects including not only private residences but also public works like the National Cathedral in D.C. for which she did the initial site planning and planting in 1899. She also designed gardens for college campuses such as Princeton, Yale and Harvard at which she emphasized certain concepts including the use of color (flower and foliage) throughout the academic year and planting to compliment the architecture, while keeping her designs simple and easy to maintain. Even President Wilson’s wife, Ellen Wilson, commissioned Beatrix to design the East Colonial Garden (now redesigned as the Jacqueline Kennedy Garden) and the West Garden (now the redesigned White House Rose Garden) in 1913.

Because the nature of gardening is change, only a few major works of Beatrix Cadwalader Farrand are still maintained the way she planned them. One such garden is Dumbarton Oaks in D.C. which she designed for Mildred and Robert Woods Bliss. It features “garden rooms” influenced by Italian and English garden elements and American Arts and Crafts sensibility. Much of the garden consists of “formal rooms” with interwoven elements of nature and achitecture that give way as you transition down a hill to more natural aethetics. This garden is really worth the trip. And if you do go, take note of how the hardscapes and nature work in harmony and change throughout.