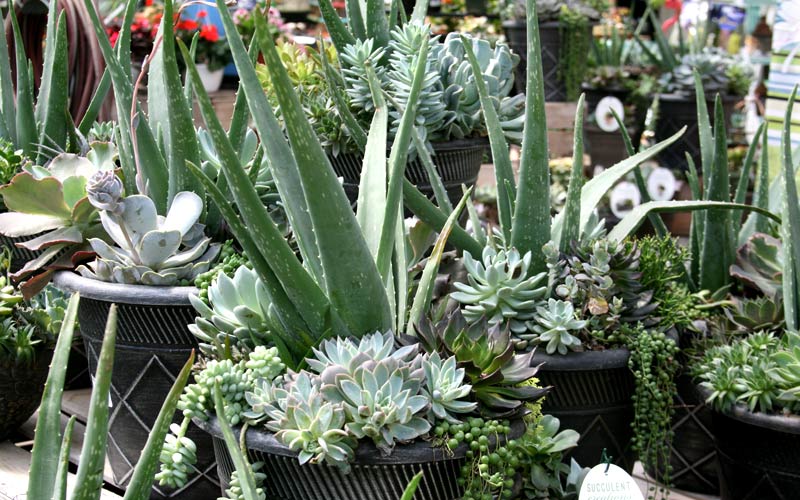 Broadly speaking, succulents are plants that have certain adaptations that allow them to endure periods of drought.  The primary adaptation is “succulence”—they are juicy, storing water in thickened leaves or stems. Cacti are succulents, although in commercial horticulture we usually say “cacti and succulents,” to refer to members of the cactus family and everything else that is succulent but is not in the cactus family.

Members of the cactus family are native only to the Americas and are grouped into the cactus family because they share unique similarities in genetics and flower structure. The other succulents are found in arid regions all around the world, including the Americas (for example Agave, which is the source of tequila).  One of the “Old World” succulents is Aloe vera, which is probably the only succulent most people know by its scientific name.  Aloe is used in many cosmetic products, soaps, and homeopathic remedies.  The sap is popularly used as an ointment for mild burns—just break off a leaf and apply. Whether it actually works is beyond my training; I’m just an ornamental plant guy and I’m not an herbalist.

The keys to growing succulents are:

Succulents and cacti tend to be more attractive when they are stressed—that is, holding back on water and fertilizer.  Low light, too much water, too much fertilizer and you get stretched or floppy plants.

Aloe vera is easy to propagate as it makes lots of offsets (pups).  Just tease them off of the mother plant (with their roots attached) and pot in cactus soil, keeping it on the dry side for a week before beginning to water.  Larger offsets (4 or 5 inches tall) will be easier for you to establish than smaller ones.