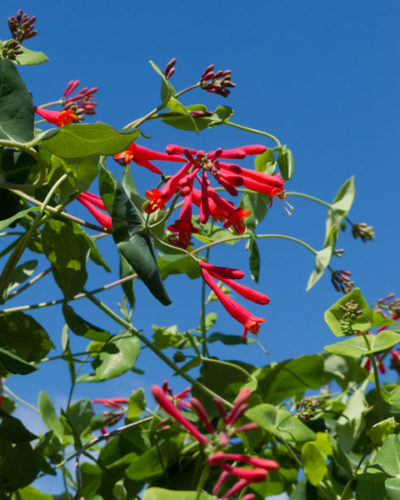 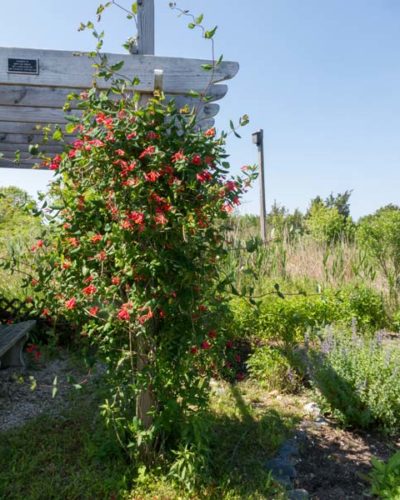 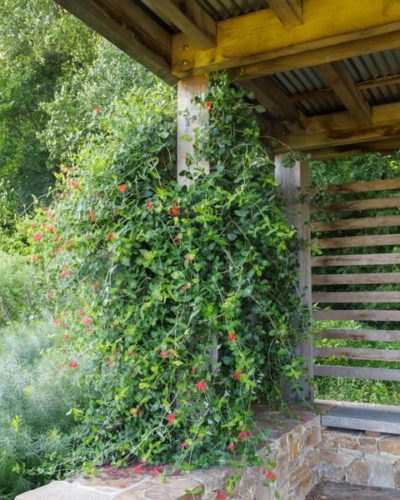 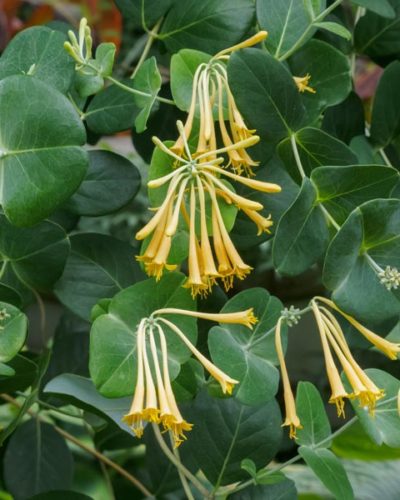 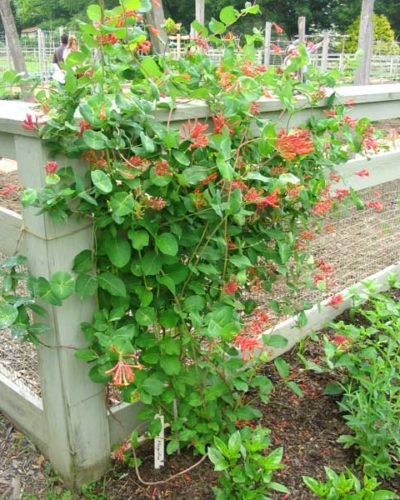 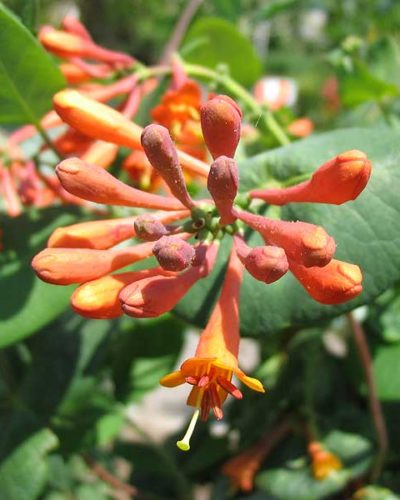 Trumpet Honeysuckle (Lonicera sempervirens)
Lots of people are familiar with Honeysuckles, but most don’t realize we have a native climbing species right in our own back yards. Non-invasive (unlike all the others) this humble vine has no scent but makes up for that with drooping clusters of coral-red or apricot-yellow trumpets. Hummingbirds love them, and they will find their own way up a trellis, fence, or arbor with twining stems. Red berries can be produced that will feed local birds, and leaves can sometimes take on muted shades of purple, red, orange, and gold in the autumn. Long-blooming, they’ll start around late spring and re-bloom throughout summer. If you’re doing a hummingbird garden, good companions include Trumpet Vine, Crocosmia, Monarda, Spigelia, and Lobelia. Trumpet Honeysuckles prefer full sun but will grow and bloom admirably well in part shade. 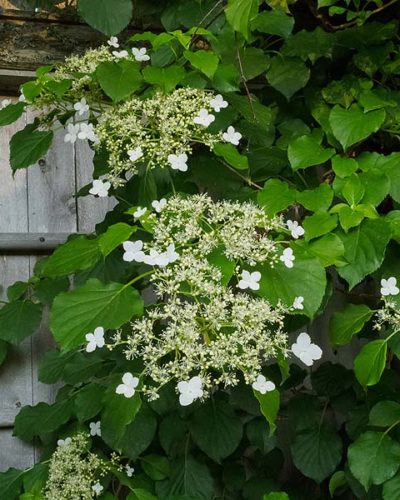 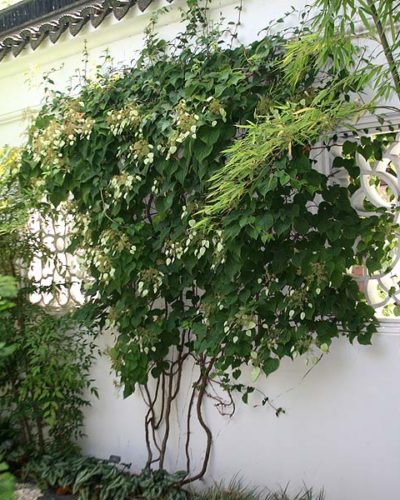 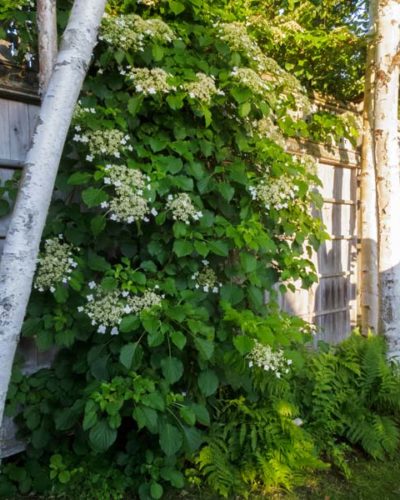 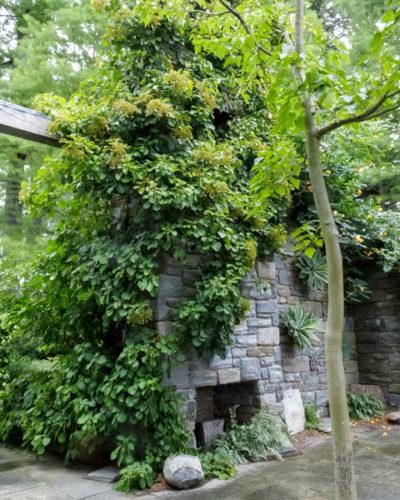 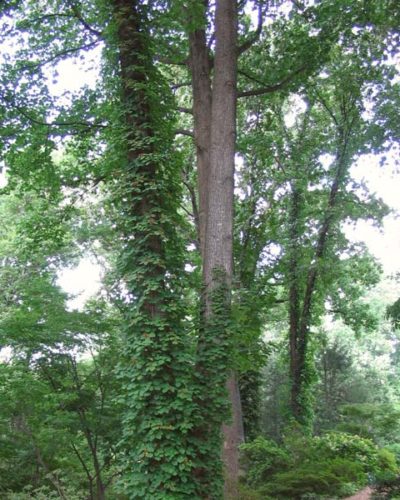 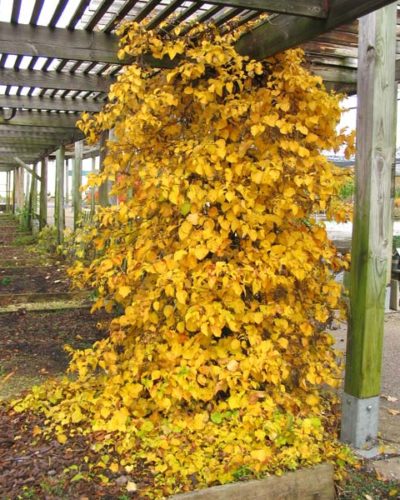 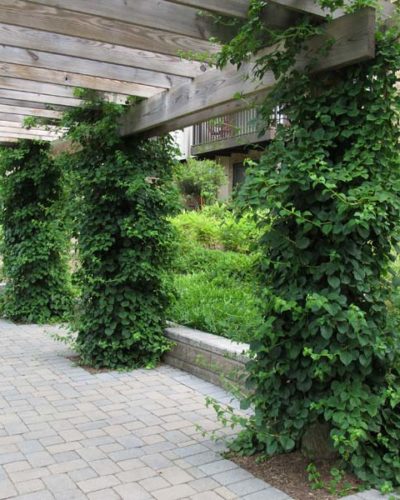 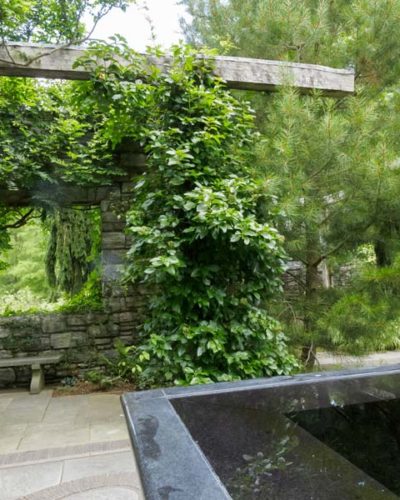 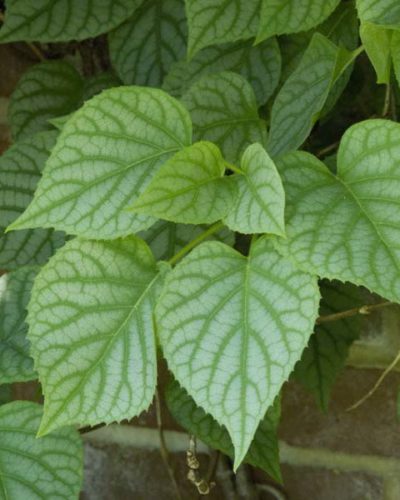 Climbing Hydrangeas
Bet you didn’t know there was a climbing form of Hydrangea! Or that there’s four different species of them that grow here. “Regular” Climbing Hydrangea (Hydrangea anomala petiolaris) is the most common and has large, flat clusters of ivory flowers with a few white petals on the outer edges. Leaves are an even, rich green and turn golden yellow in the autumn. Stems develop shredding outer bark as they age, and while the main stems hold on to structures with root-like growths, there are secondary branches that can stretch outwards a couple of feet. Slow to establish, they’re notorious for not flowering during their settling-in period (which can take several seasons), but their longevity and ease of care is well worth it. One rare variety named ‘Mirranda’ has lovely yellow-edged foliage. A cousin to this is Japanese Hydrangeavine (Schizophragma hydrangeoides), with slightly more decorative leaves and a more structure-hugging width. The most common variety of this is named ‘Moonlight,’ and flowers have larger, but fewer, white petals around the outer edges. The leaves on ‘Moonlight’ have a subtle silvery base color that makes the veins stand out more and gives it a more refined look. A new introduction of its cousin Chinese Hydrangeavine (Schizophragma elliptifolium) named ‘Lacy Hearts’ has beautifully marbled leaves in sage-green and cream. And last but not least, our native relative Woodvamp (Decumaria barbara) can be found in the mid-Atlantic and southeastern U.S. along wooded streams and other moist soils.

All of these climbing hydrangea relatives flower around late spring or early summer and cling to their supports, so they need something rough-textured to get a good hold. Wood, bark, brick, and stone work best, but even a smoother support can work if the stems can be tied-up as they grow. Give them shelter from too much afternoon sun (even full shade is ok), and as with any vine, a lack of support will result in a nice ground-covering carpet of foliage. They would grow nicely with a small Clematis if you want more seasonal color, or let them blanket your tree trunks like a green stocking to liven-up the shade garden. (Don’t worry, they won’t harm the tree the way English Ivy can.)