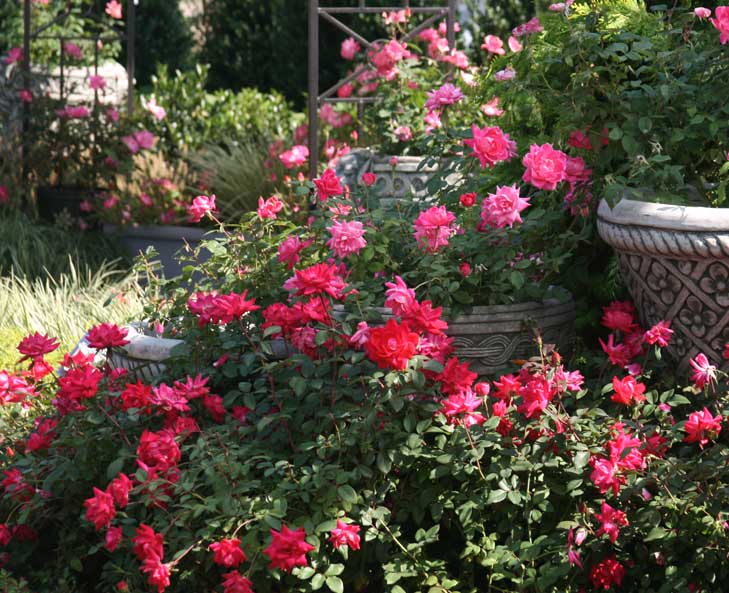 Browsing our rose selection, you’ll see that we separate them into the “classes” assigned to them by rose societies. But what does it mean to be a Hybrid Tea, Grandiflora, or Landscape? Here is a basic introduction to the main rose classes and how they differ from each other. Rose breeding has been going on for centuries, so by now there are lots of colors and fragrances to choose from in almost all of the groups. When selecting varieties to grow, knowing the general traits of each group can help you narrow-down which varieties would suit you best.

Hybrid Tea
This is the group everyone is familiar with, even if you’ve never grown roses or delved into the multitudes that are offered in catalogs. Hybrid Teas are the classic long-stemmed rose used in bouquets and they are one of the most popular classes of rose. They get their name from the fact that they are crosses between the old-fashioned Tea roses and Hybrid Perpetual roses. Breeding has been going on for a long time, and some Hybrid Tea varieties have been popular for the better part of a century; still more have been around for decades, so there are lots of tried-and-true selections to choose from. They are characterized by having a single flower at the end of a long stem, and the large 3-6” wide flowers tend to be very full of petals. Overall, the plants are near the tall end of the spectrum at 3 to 6’ tall, with a habit that is taller than wide. You don’t have to cut the flowers, of course, and instead they can perfume the garden and add colors that are hard to find in other flowering shrubs. It is true that sometimes rose breeding produces traits of either great fragrance or good disease resistance – just not in the same plant – but recent breeding efforts have been successful at providing respectable levels of both. 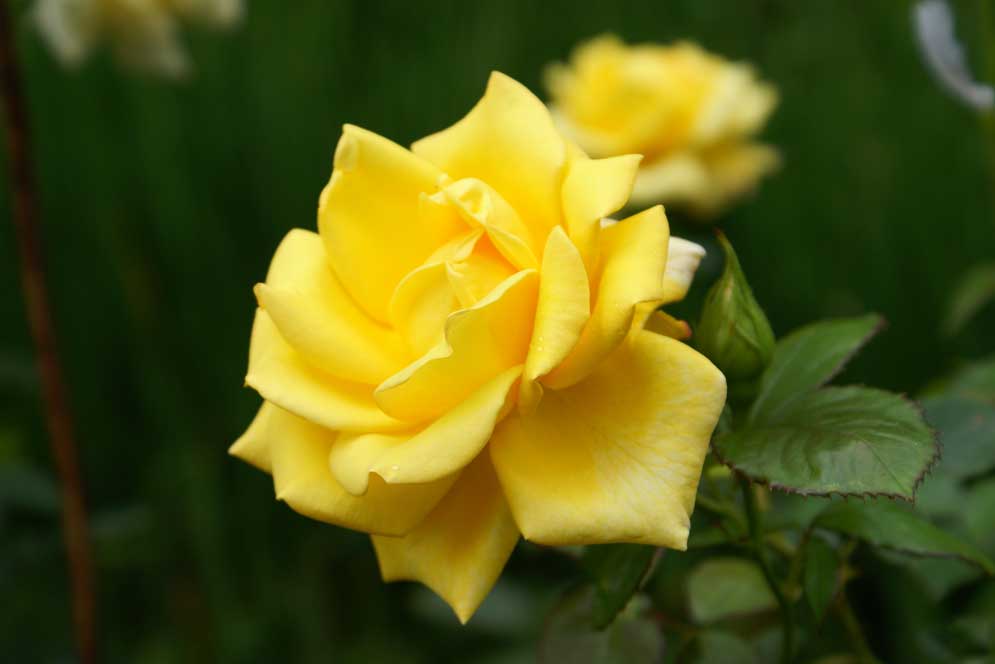 Floribunda
This group tends to be denser and bushier than most other roses and their flowering is more even and continuous throughout the season. Better hardiness adds to their value and their shorter stature – mounding habits, often 2½ to 5’ tall – allows them to mix more easily with other shrubs and perennials. Several flowers in each cluster tend to open at the same time, adding more color to the garden.

English (David Austin)
David Austin is an English rose breeder that sought to combine the form and fragrance of old-fashioned varieties with the more modern trait of repeat flowering. His company is headquartered in England and is still breeding and introducing varieties around the world that are both adaptable and good performers. Often, Hybrid Teas and Floribundas are parents in the crosses, and while officially part of the Landscape class, they are usually treated as their own group because of their special characteristics. Large flowers around 3-6” wide are very full of petals, and plants typically stay between 3 and 5’ tall with mounding growth habits. Occasionally their renowned heady scents and extremely full flowers are a trade-off for reliable hardiness and disease resistance, but forms we receive from our local growers are pre-selected by David Austin experts for good performance in our area. 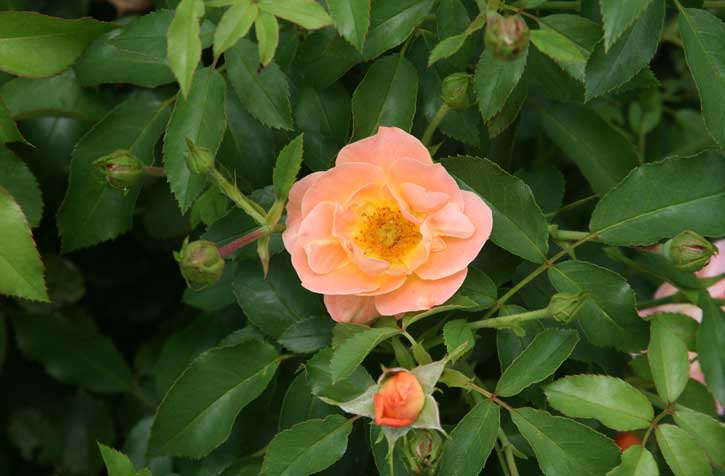 Landscape
A valuable group with an uninspiring name (all of these roses grow in the landscape!), they tend to be among the hardiest varieties with prolific blooms and vigorous growth. Typically growing wider than tall and reaching 3 to 5’ high, they have clusters of 3-4” wide flowers on short stems. Popular rose series fall into this class, such as the recognizable Knock Out, Flower Carpet, Oso Easy, Carefree and Drift. A few are even minimally hybridized and are varieties of wild rose species (though not native here) such as rugosa and foetida, which offer excellent hardiness and disease resistance; these can also develop showy fall foliage colors and bright red-orange hips (fruits) if the spent flowers aren’t removed. I think the Landscape roses tend to be unfairly overlooked because they don’t have flowers as full as the Hybrid Teas, but they serve a valuable function of adding color to the summer garden, just as any other flowering shrub would. Some even serve as great groundcovers with sprawling habits or stems that cascade over a retaining wall.

Miniature
Often arising from mutations of normal Hybrid Tea or Floribunda varieties, these have adorably miniaturized flowers at 1-2” wide. Being assigned the classification of Mini is more representative of flower form than plant size, but their stature still tends to be very compact at about 1½ to 3’ tall. They tend to have a shorter period of active growth than their taller brethren (usually just summer), so be sure not to crowd them too snugly between faster perennials. 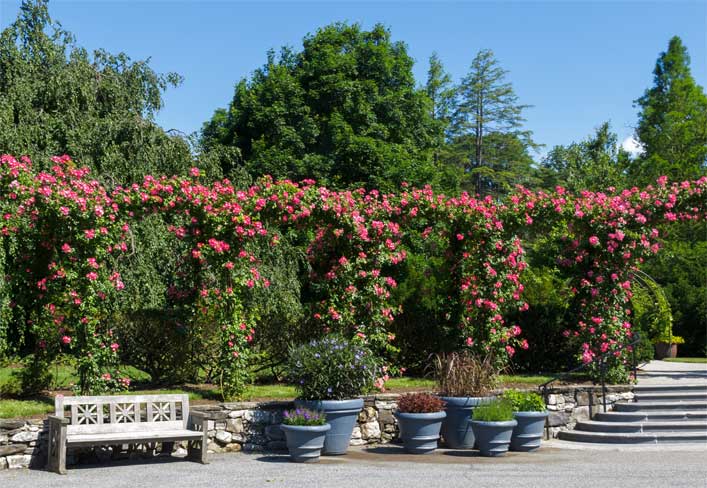 Climbing
This can be a somewhat misleading name, because climbing roses don’t climb in the way that most vines do. Instead of having tendrils, winding stems, rootlets or suckers, they simply grow long, arching stems that use their thorns to hook themselves onto taller supports. This means that, left to their own devices with no support, they’ll just flop in every direction. In gardens, they should be tied up to a support to keep them tidy and growing in the direction we want them to. While most roses benefit from a winter cutting-back, climbers should be left alone so their early spring flowers aren’t lost to pruning. Heights vary more in this group: stems reach 8 to 20’ in many forms but some new varieties are more compact and easier to fit into tight spaces. Flower forms vary too because often climbing varieties are found as mutations of shrubby forms, so they could be single or in clusters, with few or many petals. Many varieties are decades old but modern ones are better at re-blooming later into the summer.

For all roses, I highly recommend growing them mixed in with other shrubs and perennials. Why? Rose branches are not always all that attractive and out-of-bloom roses are – let’s face it – pretty boring. With companion plants, at least you’ll have nearby foliage and flowers to tide you over until more flowers develop. Roses often go in and out of bloom all throughout the summer and can have “rest” periods when no flowers are open, so having interesting plants around them really helps keep the garden exciting. My motto is “roses are flowering shrubs too!”