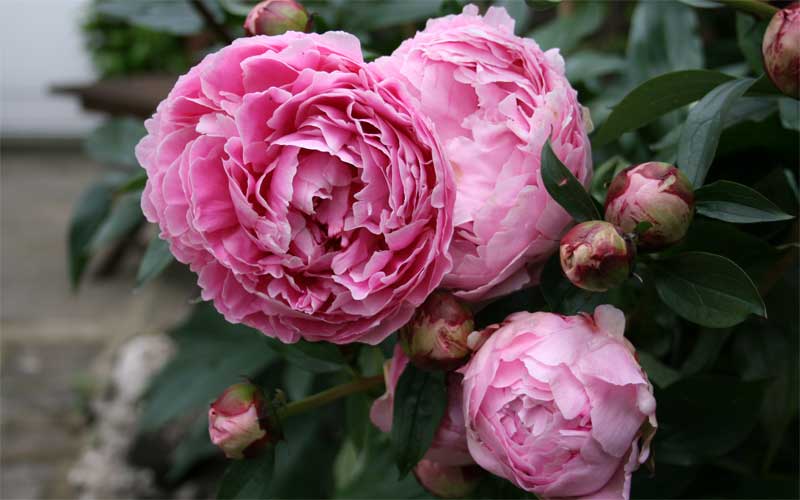 Herbaceous peonies, those that die down to the ground in the fall, are one of those garden standards that everyone seems to know, like lilacs and azaleas.  They have a short blooming period of a couple of weeks in mid-to late spring that always seems to coincide with a thunderstorm that pushes the flower-laden stems to the ground.  It’s like you walk into the garden, bend over to smell the often fragrant flowers, and boom! All of a sudden it’s pouring.

This seems to occur most often with the big, old-fashioned double flowered varieties that are heavy to begin with. Many of these varieties were bred in the 1800’s and early 1900’s, and they are the standards of the industry.  These types are best grown with a peony ring, which is placed above the plant early in the season to provide support as the shoots grow up through the ring, thus reducing peony flop.  These doubles make excellent cut flowers, so selectively removing shoots with flowers for your peony vase will give the remaining shoots more room. 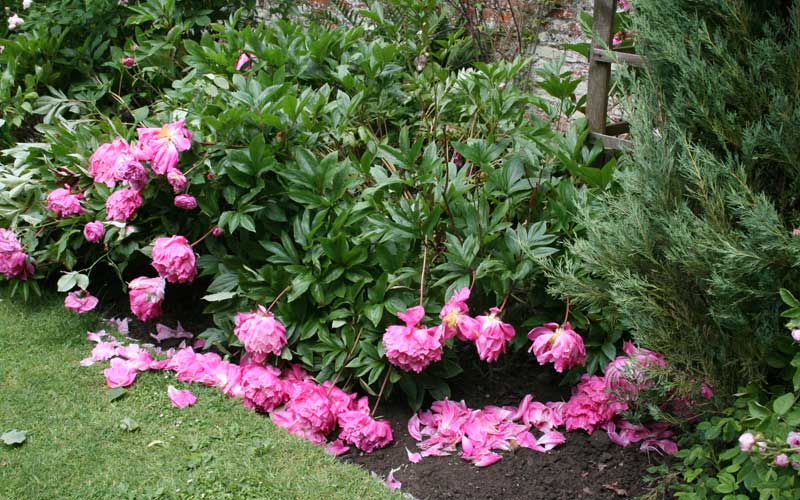 The old-fashioned peonies are great for traditional gardens, and they help create that English perennial border look that so many people enjoy. But modern breeders have spent a lot of time developing other styles of peonies.  These bear single (or anemone-shaped) blooms that are smaller and lighter, with stems that stand up to weather.  Consider these too when you are on a peony quest.  You may not even realize these are peonies, as the overall effect is more airy, and they fit better into a more contemporary landscape look. 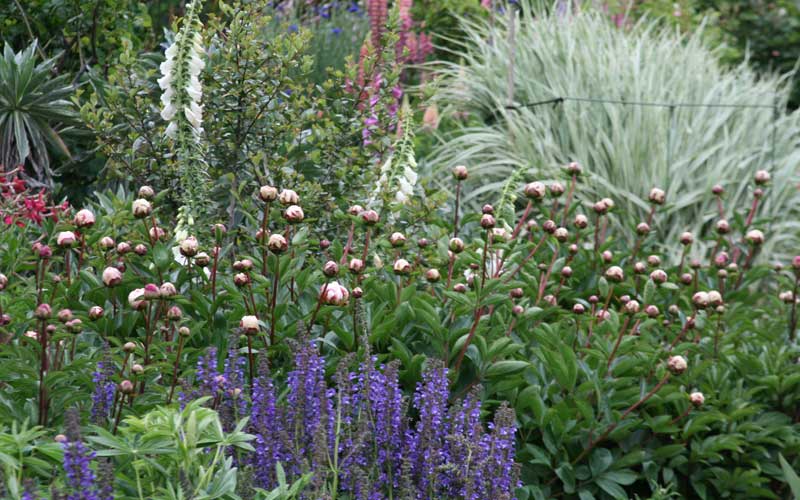 peonies in a perennial border, about to bloom

There is some variation in bloom time—early, mid-season and late (although it is a short season overall), and variation in height from about 18 inches to four feet.  So, between the flower form, the bloom time, the height variation, the color range (white, pink, red and some bicolors), and intensity of fragrance, there are plenty of options to find the perfect peony, or even to start a collection, spreading the bloom time and over about a six week period.

Siting your peony is important, because they are long-lived and difficult to move once established, (they develop a thick, woody underground crown).  Place them in full sun for best blooming, or light shade in the afternoon.  Good air circulation is important to maintain plant health.  As with many other perennials, good air movement reduces the chance of leaf spotting fungal diseases.  Also critical to blooming  is the depth of planting.  Peonies that are planted too deeply will not flower, the pink, overwintering, underground buds (eyes) should be within two inches of the soil surface.  Don’t plant the plant any deeper than it already is in the pot. 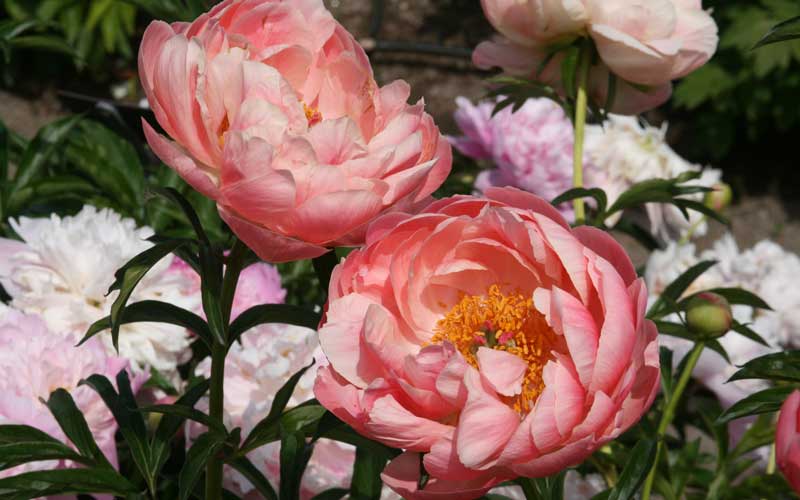 Besides herbaceous peonies, there are shrubby forms, called “tree peonies,” as well.  These do not die down to the ground, but instead get larger each year, eventually [and slowly] getting up to seven feet tall.  The flowers are very large, not particularly fragrant, and have additional colors such as deep purple and yellow.  They are slow to establish, and will be poorly rooted in the pot when you get them, but they will become magnificent with time.

There is also a hybrid form between the herbaceous and tree peonies, called “Itoh” after the original breeder.  Varieties of this hybrid group grow like small shrubs, to about three feet in height, and do not die down to the ground.  They have the color range of the tree peonies including yellow, thus allowing you to have huge yellow flowers on a shorter plant, and they bloom heavily and for a longer period than either the herbaceous or tree peonies, extending the season without having to plant multiple plants.  These tend to be the most expensive of the group, but are vigorous and well worth the money.

Peonies belong in every garden.  It’s just a question of deciding where to begin.