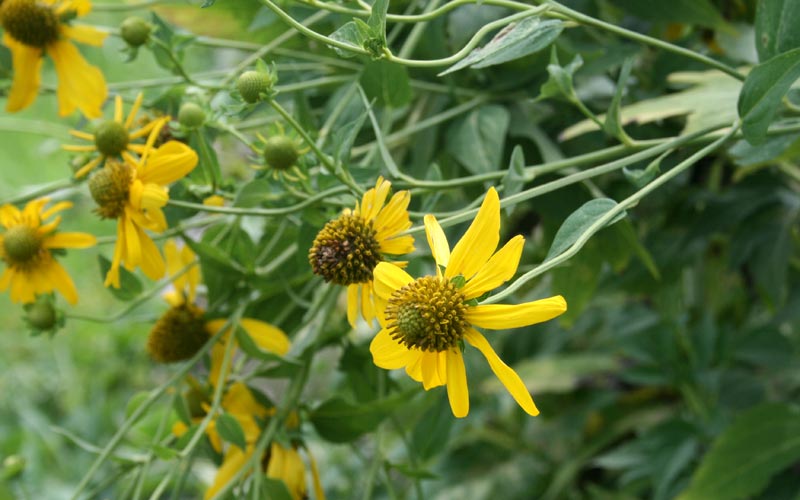 This is the third summer of our rain garden here at Behnke Nurseries.  The garden is planted with a mixture of shrubs and perennials that are all Maryland native plants with a tolerance for drying out as well as wet feet.  We have had some serious rain this year, but since a rain garden is designed to drain within 24 hours of rain (as opposed to a retention pond), we don’t have issues with mosquitoes in the rain garden.

The saying for perennials is: the first year they sleep, the second year they creep and the third year they leap.  This is leap year!  What is meant by this is that perennials that make it to year three hit their true form: true height, heavier blooming, the spreading types are springing up all over, and those that are prone to seed have seedlings popping up here and there (and everywhere).

First: beyond having record July rainfall (which has continued into August) we did have several weeks in late June and early July when it was both hot and dry, and we had a mini-drought.  Because the rain garden is designed to drain quickly after a rainfall, it also dries out quickly.  And, you know, who would think to water a rain garden?  So we had some die-back on some of the shrubs.  Some of the Itea are now only half as big as they were, leafing back out after defoliating. 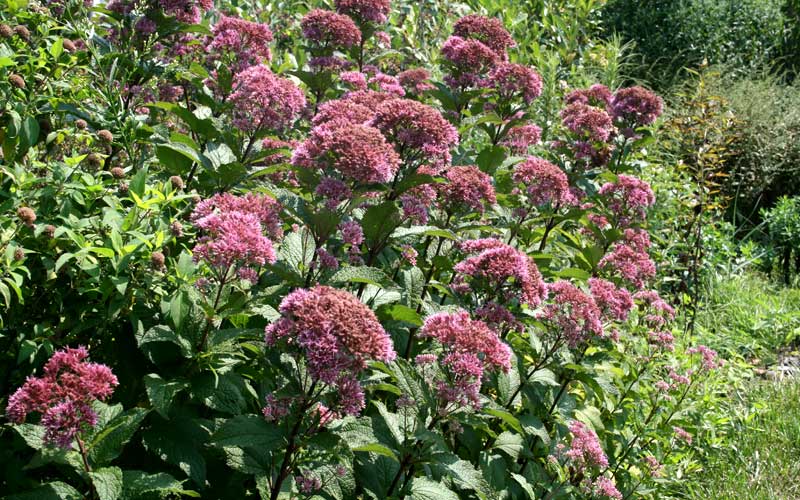 And how could we let that happen?  Some of the perennials had spread so aggressively that we couldn’t see the shrubs anymore.  I’ve spent a couple of hours weeding and cutting back.  It’s like discovering a Mayan ruin in the jungle by the time I reach the shrubs in the middle of the garden.  The Monarda fistulosa (Wild Bergamot) is very aggressive, spreading by rhizomes (underground stems) as well as seed, which is ripening now.  The good news is it is a shallow rooter and is easy to pull up.

Winning the prize for the tallest plant in the garden is New York Ironweed, coming in at eight feet tall.  It makes a tight spreading clump and self-seeds around the garden, so by sheer scale and reproductive skills it has become a dominant actor in the garden.  It’s a deeper rooter and laughs if you try to pull it up.  Very showy now with its purple flowers. 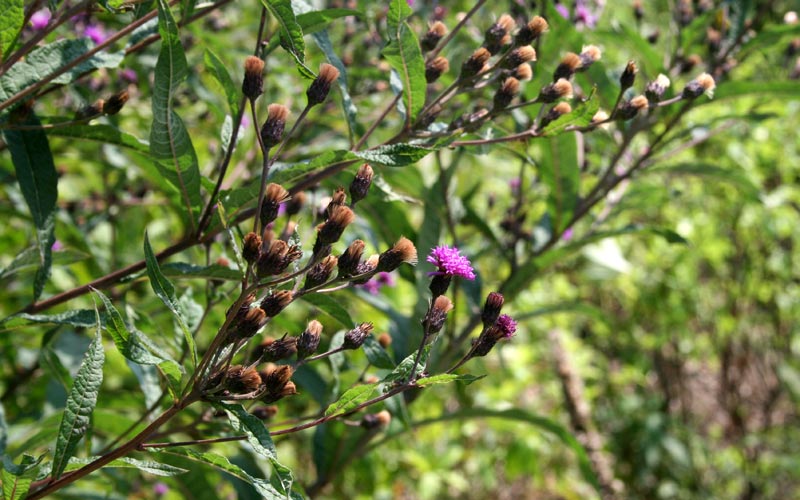 We tried planting blueberries in the center of the garden as one of the shrub groups.  They never amounted to anything, being quickly overpowered by the competition.  We pulled all but one out last year, and the last one will likely go when I can find it.

A number of low-growing perennials were planted at the edges of the garden.  The sensitive fern, which is pretty aggressive for a fern, did not do well on the upper edge of the bed.  Too dry, too often.  Aster ‘Purple Dome’ has mostly died out.  I’ve never found this cultivar to work well for me, although I have seen nice plantings of it elsewhere.

Liatris has survived here and there but has been a weak grower and we have lost more than half of what we planted.  Great blue flag iris, Iris versicolor, was looking really full and bloomed heavily this spring (although not as full and heavy as a rogue Japanese Iris that got into the garden by mistake as a mislabeled plant).  Right now they are totally covered by the Ironweed.  Next time I’m in the garden I’ll see if I can find them.

Last year I was already ripping out goldenrod, Solidago rugosa ‘Fireworks.’  I love this plant, but even though it doesn’t spread as aggressively as some goldenrods, it makes a dense stand and needs to be thinned away from the Viburnum shrubs in the center of the garden.

With the usual hot summer weather and the wet soil, the Rudbeckia laciniata (Cutleaf Coneflower) has been hit by what I believe to be a fungus called Southern Blight, so I have been pulling these up.  I have issues with this disease at home, on hostas in particular.  It attacks plants at the soil line, rotting the base of the stem, and on the hostas, the leaves yellow and fall to the ground like little fallen trees.  (This is a great disappointment to the deer. It doesn’t seem to damage the hosta crowns, and as soon as the ground gets cooler, the disease stops.  But I digress.)  On the rudbeckia, the leaves turn brown and the stems die since they have been girdled by the fungus.  At the ground level you may see the fungal growth or mycelium, which looks like wispy cotton, and tiny brown things called sclerotia that look like seeds, orange in color, about the size of a round sesame seed.  These are how the fungus survives cooler weather.  For more on Southern Blight, which would be a great name for a band or maybe a high school football mascot, click here.