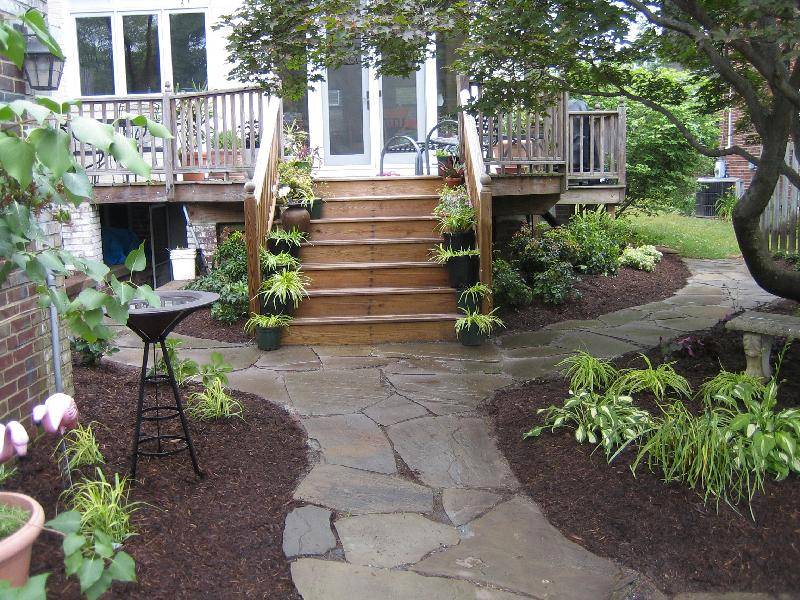 You may see the slogan “Fall is for Planting” on banners in garden centers or in advertising this time of the year. It dates back to a nursery industry marketing campaign started in the early 1980’s.

What we garden folks mean is, if you all can pry yourself away from watching all those football games, fall is a good time to plant many things in our area (that is, in the suburbs around Washington, D.C.–D.C., too, for that matter.)

So, then, Why is Fall a Good Time to Plant?

Fast root growth
Coming out of the summer, soil temperatures are still warm. In order for roots of trees, shrubs or perennials to grow, soil temperatures need to be above 40 to 45 degrees.  Temperatures vary from year to year, of course, but basically, soil is hot in the summer, warm in the fall dropping to cold in the winter, and warms gradually in the spring to become hot again in the summer.  Just like the air! Coincidence? I don’t think so.

Looking at some tables of soil temperatures for from the USDA Soil Climate Analysis Network, I found that soil temperatures at the testing station near our garden center in Beltsville were still warmer on November 15th than on April 15th (mid-50’s vs. low 50’s).

So when planting in September into early October, you still have plenty of time for the soil to stay warm enough for plants to root out going into the winter.

Hint: Because evergreens have leaves or needles during the winter, they lose water faster than non-evergreen (deciduous) plants. To reduce winter burn (needles or leaves drying out), plant them as early in the fall as you can to get maximum rooting. And water them during dry spells.  This is critical for broadleaved evergreens (the ones with leaves, not needles) such as camellias, hollies and boxwood.

In addition to the soil being warm, fall air temperatures are generally pleasant in early autumn. Plants like this as much as we do, to the extent that they like anything. They photosynthesize to make “food” during warm days, and the cool nights allow them to store more of what they make than when the nights are hot in the summer.

A better time to work in your flower beds
Another reason to plant in fall is, it’s not muddy–unless there’s a hurricane, in which case you probably have other things on your mind. In the early spring, the soil tends to be much wetter than in fall. Digging in or walking on wet soil is bad for the soil.

Think of soil as being like a piece of cake. It’s solid, but it has a lot of air in it. If you press the cake with your hand, it collapses and you squeeze the air out. Same thing happens with wet soil. When you walk on your lousy clay soil when it’s wet, you compress it. It becomes even harder to work with, and drains poorly, because you have lost your little air pockets. Your soil needs air spaces in order to drain, and plant roots need air to live.

In the fall, the soil dries between rains and is better to work with than early spring soil, which is usually soggy from melting snow.

An extra winter of growth
Since your plants have rooted out during the fall, they start to grow as soon as conditions are right in the spring. They are happily growing in your garden, while your neighbors are wandering around the garden center in April with a thousand of their closest friends, trying to decide what to plant. So basically, you pick up a season’s growth for no extra cost.

Some plants are just meant to be planted in the fall
• Spring-blooming flower bulbs like daffodils and tulips are fall-planted.  In the fall, the bulbs are dormant, and the flower in the spring. Well, they are supposed to be fall-planted. An incredible number of bulbs are bought but people never actually get around to planting them. You know who you are.
• Pansies can be planted spring or fall; however, if you plant them in the fall, you not only get fall flowers, but they also overwinter, and you get a re-bloom in the spring. So if you plant in the fall, you get two seasons for the price of one.
• Fall vegetables (lettuce, collards, cabbage) and ornamental cabbage thrive in the cooler temperatures of autumn.

So that’s the deal. If you can find time to get outside over the next six weeks or so and do some gardening, your time will be well-spent.  Probably a better use of your time than watching football!