Last week, Stephanie wrote a nice story about how she loves the fall and she loves leaves and how pretty they are and what a great time she had with her grandchildren in the leaf piles.  I have more of a love/hate relationship with leaves. Love them when they are on the trees, hate raking them up in the fall.  I’d rather shovel snow than rake leaves, given a choice.

Partly it’s because we live on a wooded lot and the trees are black oaks, tulip poplar, American beech, and pignut hickory.  We get some yellow fall color and a lot of shades of brown, but not the spectacular reds of folks with maples, sweetgum or blackgum.  (Or poison ivy, which is often the first thing to turn a delightful and seductive orangey-red in the fall.) And our trees drop leaves late, usually after a couple of good rainstorms, so our leaf piles are wet and not much fun to jump in.  That all said, it’s got to be done.

You should remove leaves from lawns so that your grass continues to get light and air. If you don’t have a lot of leaves, you can mow the lawn with a mulching mower and the small bits of leaf will eventually decay and feed your lawn.  Personally, I prefer to use a rake instead of a leaf blower, especially when it’s dry, because it seems like the blower takes so much of the organic debris off the surface of my (admittedly patchy) lawn, and kicks up a lot of dust as well.  I love leaf blowers for hard surfaces though, like the driveway.  Of course raking is great exercise and is mostly quiet, except for the occasional moan of the raker.

I don’t rake the leaves from my flower beds, preferring to let them decay in place, and I don’t mulch the beds. I do remove from pathways and mulch the pathways so it’s informal but not sloppy. You don’t want to bury your perennials under two feet of leaves because it’s a challenge for them to emerge through the cover in the spring, but a light covering of a couple of inches won’t hurt.  (I have read that maple leaves tend to pack in layers which you don’t want; the oak leaves that I have stay relatively loose.)

Besides keeping your lawn happy, another reason to remove fallen leaves is for disease prevention.  Some plant fungus diseases overwinter on fallen leaves and then reinfect the next season.  So if you have a problem with apple scab on crabapples for example, you want to bag the leaves and get rid of them.  If you get an I.D. on some plant malady, this is often recommended as part of practicing “good sanitation.” 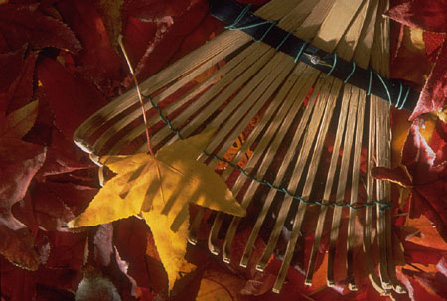 Instead of taking the leaves to the curb or bagging them if that’s a requirement of your county, consider dumping them in a corner in the back to make compost.  It’s amazing how, over the course of a year, that big pile of leaves disappears to an inch or two of compost, which is useful for planting or mulching.

Last—if you have nut trees like we do, you have had the pitter-patter of acorns or other nuts falling for a while now.  (The pignuts at our place are big enough that they leave dents in the car, like hailstones.  Glad we don’t have walnut trees.)  Last year we had (probably) literally a ton of acorns, this year almost none, but it’s the first time since we bought the house in 1984 that the beech tree bore heavily.  It’s the first time I have actually seen the beech seed—the squirrels absolutely love them but they are too heavy to get all the way to the end of the branch.

Of course, the squirrels and chipmunks like the acorns and other nuts too, but so do deer and white-footed mice, so if you have a tick problem around your yard/garden, it’s recommended that you remove the acorns to reduce the number of mice.  Along with the deer, these outdoor mice are hosts for deer ticks, which carry Lyme disease between the two populations.  So fewer mice, fewer ticks, less chance of getting sick.

When I was a kid, I earned money in the neighborhood by cutting grass, raking leaves, and shoveling snow, plus taking care of our own home for my folks.  I don’t see much of that now, it seems like the parents (or the lawn service) do most of the leaf raking or snow shoveling while the kids are busy studying or texting or whatever it is they do.  It’s too bad; even if leaf raking isn’t my favorite task, it’s still a chance to connect with nature, and we can all use more of that.