Vacation time for this girl! I’m down at Daytona Beach Shores. Among my very favorite things to see when we come here are the folks from the Turtle Patrol. Every morning they are out checking to see if any of the female sea turtles came ashore during the night. 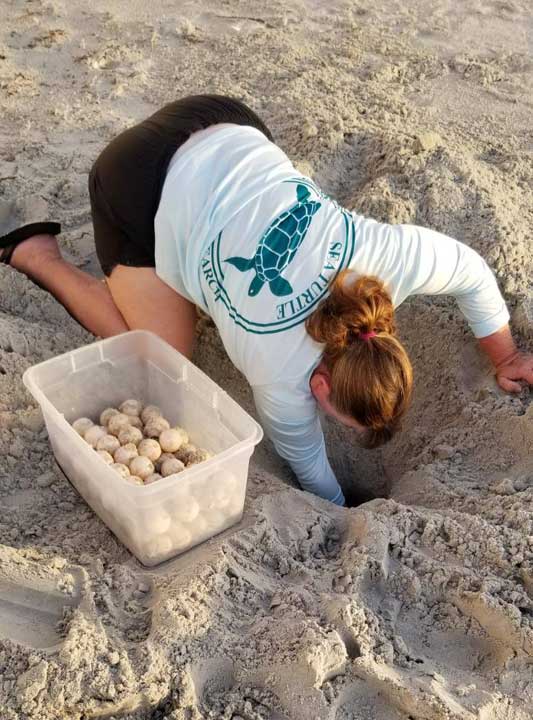 While I was out walking the other morning, I saw that they had stopped and were very busy doing something. Of course I walked up and as I did, I could see the heavy tracks made by a very large turtle that had come way up the beach during the night. She was gone but the Turtle Patrol folks were digging out all the eggs!!! I have never seen something like this before and asked why they were removing them. Apparently the female made the error of laying right in front of a condo drain pipe which would be deadly to the eggs. I watched as egg after egg was removed! 97 loggerhead turtle eggs would be moved down the beach to where no cars or other man-made obstacles such as brightly lit beaches and hard structures such as seawalls would impact the survival of the hatchlings. Sea turtles have died as a result of bright artificial lights which can disorient them when they out of the water.

The female sea turtles come out of the surf at night and crawl up the beach toward the dunes to dig a deep hole in the dry sand to lay their eggs. She then covers the eggs with sand and returns to the sea. An average nest contains 100 eggs! One female will make three to five nests each nesting season. 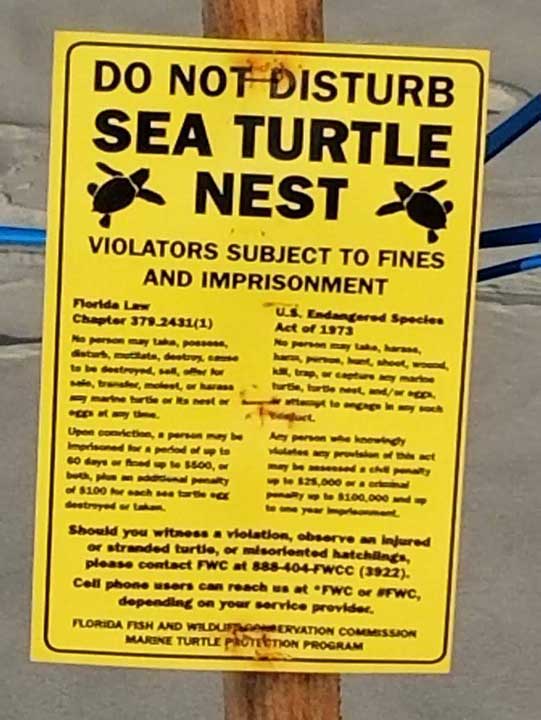 If the female had laid her eggs in a safe spot, the Turtle Patrol would have put stakes in the sand around the nest and signs along with the date she laid her eggs. The bright yellow signs say: “DO NOT DISTURB Sea Turtle Nest!” We have one such nest right next to the steps from our condo. This nest was discovered June 14th and since it takes about 2 months till they hatch, we are expecting to see the little marks of a hundred tiny baby sea turtles using the moon to make their way back to the sea any night now.

Each evening for the past week, a man comes and puts down a bar behind his tractor and does oval laps in front of the nest. This is so that when the turtles finally hatch one night, in the morning we will all see the tiny little turtle tracks as they make their way to the sea. I did happen to see turtle tracks one morning after a different nest of babies hatched and left. Amazing to think of how they had to get out of the egg and crawl up and out that hole and then make the long trip to the ocean with the bright light of the moon to guide them.

Did you know that all of the world’s sea turtles are designated as either endangered or threatened and are protected by local, state, federal and international laws? The sad fact is that this means sea turtle populations are shrinking. Even though so many are born at a time, most do not survive the first year. A female doesn’t even start to lay eggs till she is around 35 years old! All the more reason to cherish the sight of baby turtles.