In Part 1 of my Garden Club Report from the Behnkes Garden Party, six local clubs were covered.  Here are the other clubs (and more!) that took part in this fun event.

The Four Seasons Garden Club was represented at various times throughout the day by Jim Dronenburg, left, and later by Chris and Karen Upton.  Originally a hort-related way for gay men to socialize, the club has morphed into a super-active, all-inclusive group of about 80 dues-payers and friends, including many of the DC area’s top horticulturists.  They have a free Yahoo group through which advice is asked for and received and the club’s two monthly events are organized and announced.  Yes, every month the club holds a lecture AND a field trip!  (Next up, 7 carloads are making the trip to Monrose, NC.)  Plus, the club holds two plant swaps every year and two holiday parties. 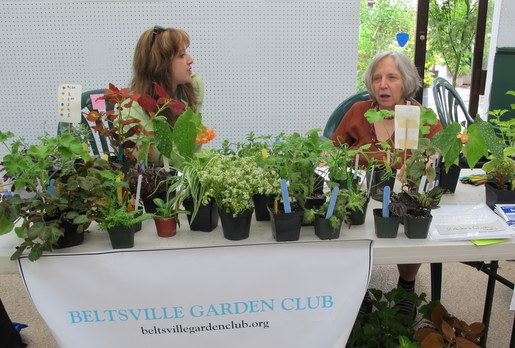 The close-to-Behnkes Beltsville Garden Club is another very active group.  Since moving to Greenbelt I joined the club and am impressed with their strong emphasis on public service, especially their support of the Duckworth Elementary School.  Duckworth’s greenhouse was unused and its gardens nonexistent until the club adopted them, and gardening is now an integral part of the school curriculum.

The Beltsville Garden Club is also known for its awesome plant sales in April and May.  We profiled the club here on the Behnkes Blog.

The Potomac Hosta Club  is the “go-to club for hosta-lovers” in DC, MD, VA and WV.   They host lectures, open gardens and other fun events (ever played Hosta Bingo?) and plant sales at both River Farm and the National Arboretum.  Among the potted-up hostas I spotted a product I’d never seen before, which was recommended to me as a new way to keep deer from eating your hostas.  Called Hosta Saver, it’s a little bottle of pellets that you insert near the hosta roots, after which they act as a systemic deterrent.  There’s nothing about it online yet but if it works as advertised, I expect Behnkes to start stocking it. 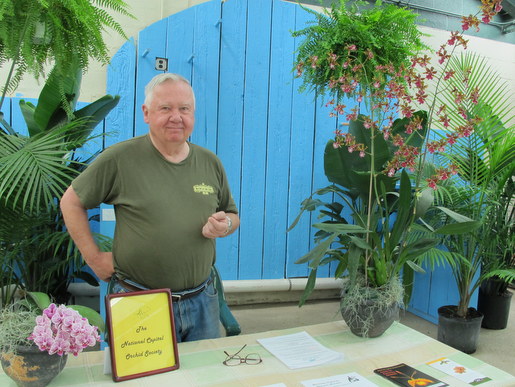 The National  Capital Orchid Society is a familiar sight at Behnkes – they’ve held some big events here, including the recent Paphiopedilum Forum. (We love having them!)  From this gentleman I learned that the Phalaenopsis orchid may just be the most popular houseplant today, and is the easy-to-grow gateway orchid that’s drawing people to orchid by the droves.  (Greenhouses have sprung up across Taiwan to meet the new demand in the West.  And due to the increased supply, prices are way down.)

Each orchid flower lasts up to three months, and each scape will flower up to five months!  They do best in low light, so maybe an east window or a shaded south window, and I’m told they’ll love hanging in my porch under the skylights.  Indeed they love the outdoors, as long as they’re kept off the ground (to avoid slug damage).  Plus, cats won’t eat them.  That’s it – I’m trying one!  I was told to just avoid overwatering – the most common cause of orchid death.

The National Capital Orchid Society has about 400 members who meet regularly, and their big annual show over the Columbus Day Weekend is not to be missed. 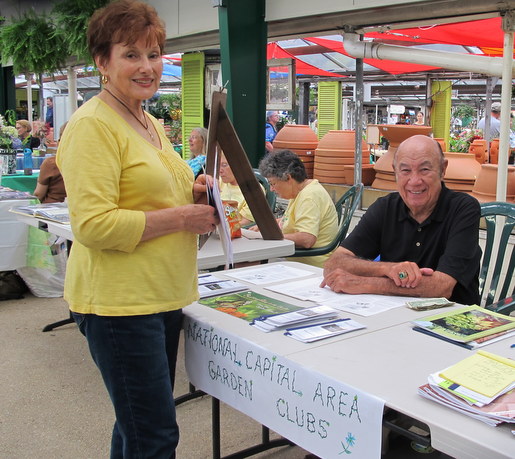 The National Capital Area Garden Clubs is composed of 81 garden clubs throughout DC, MD and VA.  It supports the National Arboretum in myriad ways, including operating its gift shop and helping to maintain Fern Valley.  The group also provides scholarships in horticulture, landscape design and environmental students for area students.  They also operate a speakers bureau for the benefit of member clubs. 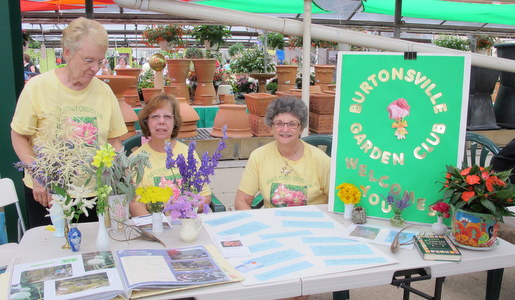 The Burtonsville Garden Club is a friendly group of about 40 members – small enough to meet in members’ homes (and gardens, I bet).  Their activities include garden tours and day trips, including a trip each year to the Philadelphia Flower Show, and plant swaps and sales.  There are also purely social events to celebrate summer and winter, and lots of good service projects, especially those that enliven the lives of nursing home residents.  They can be contacted via email:  BurtonsvilleGardenClub@gmail.com. 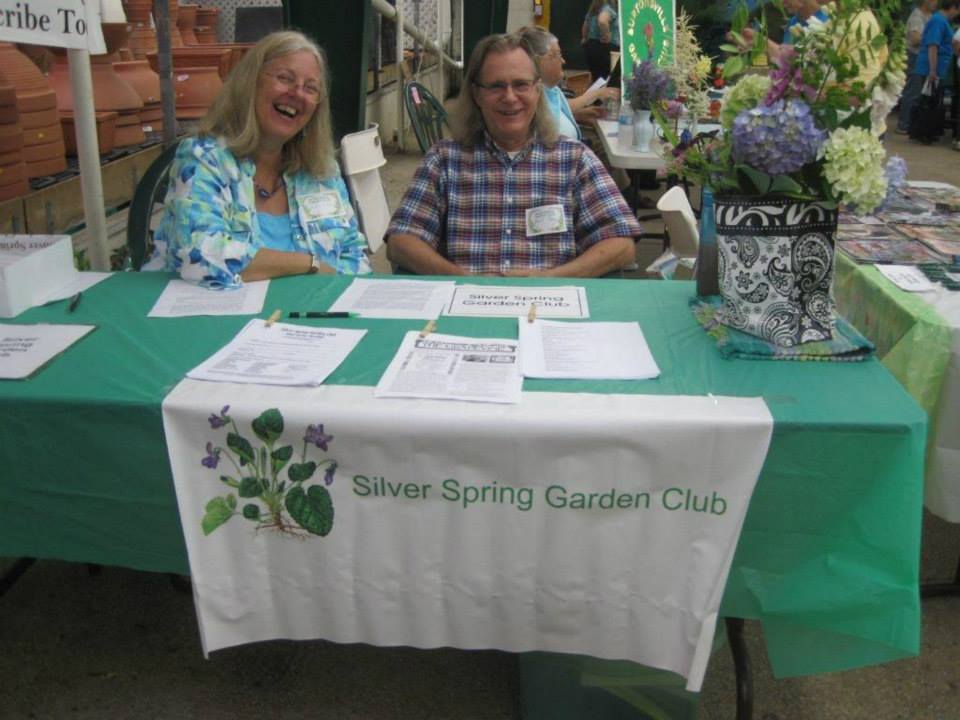 The Silver Spring Garden Club (profiled here on the Behnkes Blog)  is one of the largest clubs in the area, at about 150 dues-paying members and lots of others who attend their public meetings.  President and Program Chair Kathy Jentz (see below) does a fabulous job lining up speakers, a roster that’s included some of the best authors and speakers in the U.S.  Check this link to see who’s coming up soon. 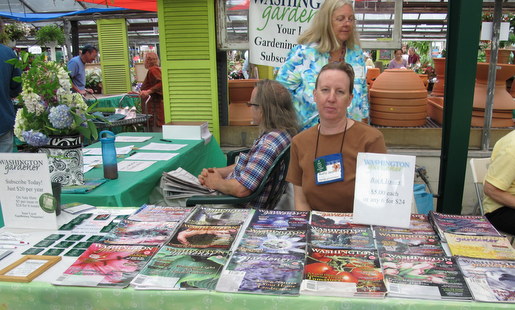 Speaking of the Silver Spring Garden Club, president Kathy Jentz is also editor and publisher of local favorite Washington Gardener Magazine.  She was on hand in her various capacities, as she is everywhere garden-related in the region and beyond.  Nobody can figure out how she does it all, and so well, too. 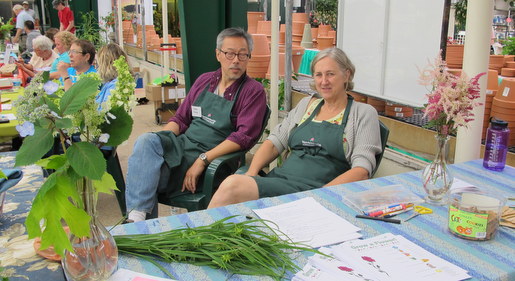 The Takoma Horticulture Club boasts a large membership AND historical significance as possibly the oldest garden club in the whole U.S. (It’s been going great guns since 1916, and no other garden club has been found to rival that duration.)  We profiled “Takoma Hort” here on this blog.  Their activities include two popular plant swaps, lots of in-garden events (called “Open Gardens”), terrific speakers and a bulb sale every fall. 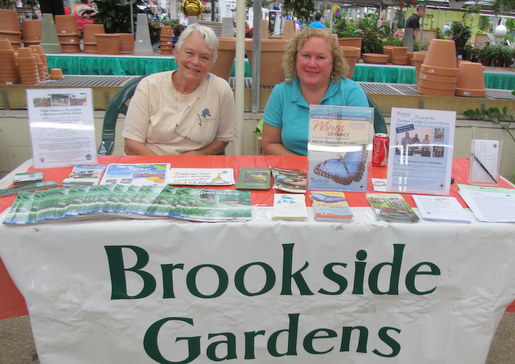 Brookside Gardens is – of course – the beloved public garden of Montgomery County, site of many events by local clubs (including all those by the Silver Spring Garden club).  Shown here tabling for the garden are Anne Hardman, avid garden volunteer about town, and Leslie McDermott,who works for Brookside doing (I believe) marketing and communications.  She does a great job, whatever her title! 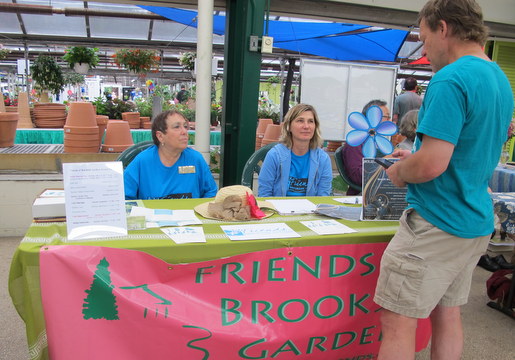 And here’s an actual club, the Friends of Brookside Gardens, which was the beneficiary of the auction held at Behnkes during the Garden Party event.  It’s a great cause that everyone can agree on.  We have FOBG to thank for all these events, and overall, for making Brookside the fabulous public garden that it is. 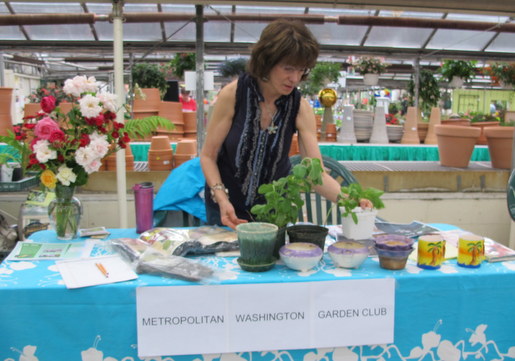 The Metropolitan Washington Garden Club is another old club (formerly the Men’s Gardening Club of Montgomery County, but those days are long gone) and currently has about 45 active members.  Next up on their roster of events is a picnic on what I was told is a fabulous farm in Gaithersburg, possibly the last large one in the county.  Its regular get-togethers, held in Bethesda, include  plant swap, tours and guest speakers.  They also offer spring-blooming bulbs at club discount prices.  They can be reached via email:  sengfarm@juno.com. 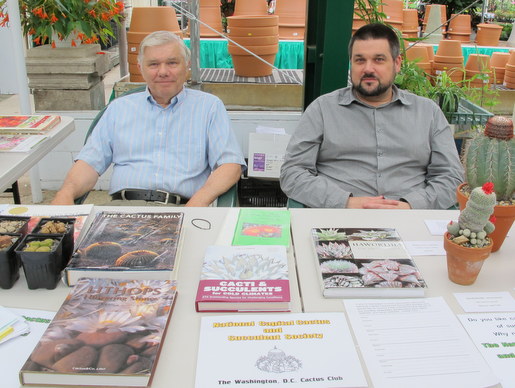 The National Capital Cactus and Succulent Society holds its big show each year in August (at Brookside Gardens) and that’s a great place to learn about and buy hardy cactus and other succulents for our region.

I chatted with Bob Stewart (left above) who highly recommends the new book Cacti and Succulents for Cold Climates by Leo Chance for local gardeners.  He also showed me the photo above of his very own garden, but warned that it’s NOT the no-maintenance garden that some might assume.  (Sure, we gardeners know there’s no such thing as no-maintenance but newbies might be fooled by inaccurate hype in the media.)

The club,which is seriously committed to preserving and studying cacti and succulents, also reaches out to “closet succulent growers” in our area to help them avoid common problems encountered by people unfamiliar with these plants. 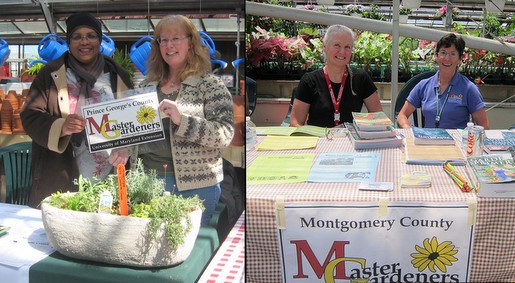 Finally, both the Prince George’s and Montgomery County Master Gardeners were here recruiting new members and answering everyone’s gardening questions, but somehow I missed them altogether. My bad!  I’m so glad I’ve written elsewhere on this blog about these fabulous groups – Montgomery County MGs here  and Prince George’s MGs here.   The photos here were taken at other Behnkes events (one of which must have been colder).

Before I go, here’s a big shout-out, well-earned kudos and a big thank-you to Garden Party organizers Carole Galati and Stephanie Fleming.  Carole is known for her devotion to gardens and garden clubs far and wide (Takoma, Silver Spring, Arboretum, Brookside, et cetera) and she shared her very own garden on this blog.  Stephanie is the granddaughter of Albert Behnke himself and devotes herself full-time to the company and its customers.

The 2022 Maryland Home and Garden Show