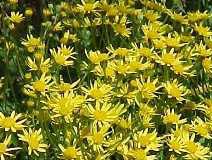 Plenty of rain, warmer temperatures, and the inevitable passage of March into April has plants bursting into bloom.  Don’t you wish you had actually planted all those daffodils you bought last fall?

Meanwhile, in the wonderful world of perennials, a little known native, Senecio aureus (in the throes of a name change to Packera* aurea) common-name Golden Groundsel. It will soon be flowering, several weeks ahead of when you would see it blooming in the landscape.

Golden Groundsel has shiny green leaves with a purple cast. In mild winters, it will be evergreen.  It bears small yellow daisy-type flowers, achieving heights of up to two feet when in bloom.  It blooms early and continues blooming for a number of weeks, longer than most spring-blooming perennials. It’s native to the Eastern United States and Canada, occurring in “wet meadows, rich, moist woods; swamps, bogs” (Erv Evans; North Carolina State University).

In gardening situations, it will do well from full sun to full shade, as long as it has adequate moisture. It is best in naturalistic plantings; it spreads underground and also seeds itself around, making it a good ground cover in moist shade. Its seeding tendencies make it too aggressive for a formal perennial bed.

So, if you have an informal area that is just crying for something besides Vinca minor or pachysandra, why not try a batch of Golden Groundsel?

You can view a nice photo and description on the website of one of our suppliers; www.northcreeknurseries.com keyword, senecio.

* On the name change: it is my theory that plant taxonomists are tired of getting flack for changing the names of beloved plants such as sedum and aster to more scientifically proper names like Teliphium and Symphyotrichum.  I believe that, to show that they are really just regular guys and gals, they are rolling out a more user-friendly Football Team series of Latin Names, with Packera being the first.