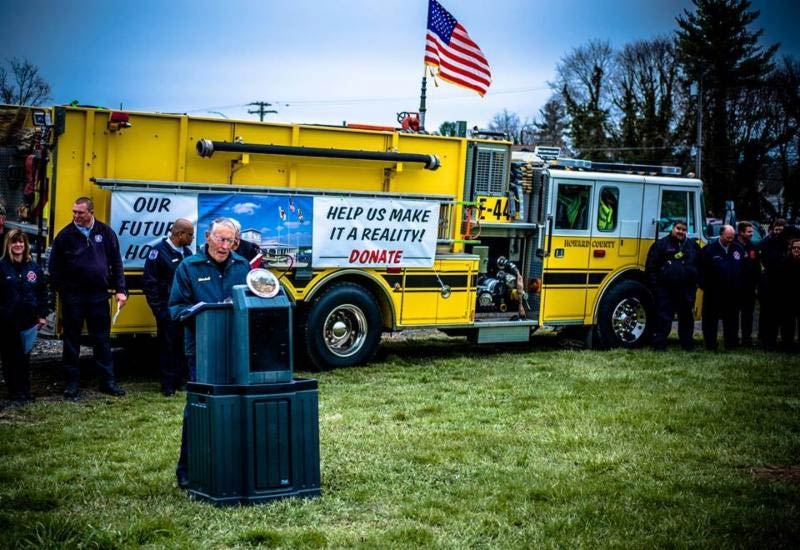 This past Saturday, April 7, 2018, my family and I went to the groundbreaking ceremony for the new Lisbon Volunteer Fire Department in Howard County, Maryland.  Though it was a cloudy, windy, cold day over 200 people in our town came out for this event. The Lisbon community has made our fire station what it is today. The ladies’ auxiliary has been a big part of the department too, by supporting the fire fighters and raising funds to purchase equipment over its long history and they were all there to help with this groundbreaking ceremony.

My father in law, Marshal Fleming was asked to speak about the history of our fire station. We were so proud of him when he got up to speak. I actually taped his short speech so we can share it with our grandchildren as they grow older. As one of the oldest active members, Marshal has filled many shoes over his 65 plus years as a volunteer, from chief to president, to the first Howard County Fire Board member from the 4th district. But as he mentioned to us, this was not about him. It was about the department. He told of the 16 men that got together in the early 40’s to start the 4-bay station on rt. 94 and where and how they were able to help their community. Now having outgrown that station, they are ready to finally start construction of a wonderful new fire station and activity hall that will still be owned and run by volunteers.

Our country was built on men and women like Marshal and the many others that came out on Saturday, who volunteer to help the community. Here in Beltsville, I remember the sounds of the fire bell ringing to let the volunteers know they were needed. At any station, there is always a need for volunteers. Many a career was started by a young person giving time at their local station, then going on to become professional fire fighters and EMTs. My own husband joined Lisbon Volunteer Fire Department as a teenager along with his brother and many of his friends. While he did not stay in the department, but went on to start our own wholesale nursery, many of the lessons he learned in training and being a part of the station helped him become the man he is today. If the idea of joining a organization like the fire department is something you might want to commit to, stop by your local fire department and learn more about it.

Fire fighting, as with all first responder positions, is very stressful but from what I have seen very rewarding. There is a sense of accomplishment in helping. It is like a family that embraces you and yours even when you step back from the actual job of going out on calls. As I looked around on Saturday,  I saw the children and grandchildren of past and present members. Some are now members themselves but many, like us, were just so proud to come out and support their family. Their Lisbon Fire Company family.

By the way, if you’re ever in the mood for a wonderful meal, drive out to Western Howard County and check them out.  They hold a monthly breakfast buffet and an all-you-can-eat spaghetti dinner. Just a little drive in the country but a big support for our new fire house.