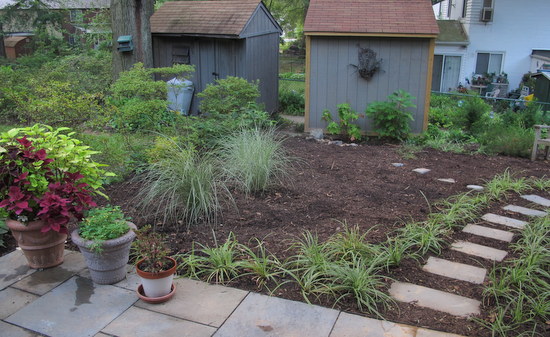 When I reported on my new back garden in late July it looked woefully empty, as shown above.  Patio and walkway done, a few shrubs and trees planted, but otherwise bare. 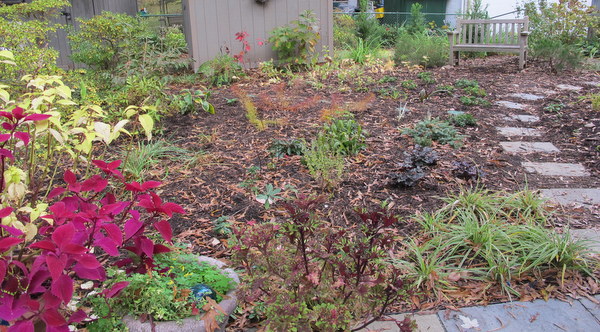 In this September photo you can see some of the new plantings I’ve added, but they won’t really strut their stuff until next season and won’t really fill out for a season or two.  Patience is required!

Here are the new plants I’ve acquired somehow or other, all plants I expect great things from.  The color palette I’m going for here is purples, maroons, and greens.

Amsonia hubrichtii- three.  Wish I had room for more because this may just be my favorite perennial.

Aster ‘Purple Dome’ – just one.  It’ll stay short, for the front of the garden.

Echinacea purpurea ‘Magnus’.  Just one, and I hope it spreads fast next year.

Eucomis ‘Sparkling Burgundy’ was unknown to me but recommended by a designer friend.  VERY cool purple leaves – check it out.

Hostas, which I couldn’t grow in my last, deer-infested garden: ‘City Lights,’ ‘Frances Williams,’ ‘Earth Angel,’ ‘Elegans,’ and huge divisions of plainer varieties from neighbors for fast fill-in in the first year or two.

Iris ‘Argentea Variegata’ for its light green and white foliage.

Penstemon ‘Husker Red’  for its deep red stems and leaves.

Persecaria polymorpha (Giant Fleece Flower) was also recommended by my designer friend – for something tall and dramatic.

Perennials from my old garden or giveaways from neighbors

Calamint ‘White Cloud.’  Great filler plant for the front of any border.

Euphorbia amygdaloides, Robb’s Spurge.  Evergreen even in the shade!  Also, fast-spreading.  Used it to great effect in my former woodland garden.

Miscanthus ‘Morning Light’ blooms too late for the seeds to germinate, so it’s not invasive.

Sedum ‘Autumn Joy’ are divisions from a neighbor.

Plus these fill-in plants

‘Tangerine Beauty’ Crossvine (Bignonia) for a vertical accent that’s evergreen and then sports reddish orange blooms in the summer.  Planted far enough away from the purple-maroon palette that it won’t clash – hopefully.

Hardy bananas will, I’m hoping, give me some instant screening next year where it’s needed the most.  Eventually the three Cryptomerias (Japanese cedars), six Blue Prince and Blue Maid Hollies, and three full-size Abelias will provide screening, but not by next year.

Patience is again helpful but when it’s in short supply, fast-growing hardy bulbs come in handy.