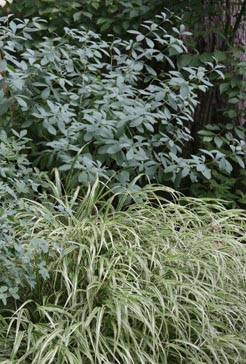 My favorite ornamental grass is the Perennial Plant Association’s Perennial of the Year for 2009, Hakonechloa macra or Japanese Forest Grass. This is an interesting choice because, while they are terrific garden plants, they are a wee bit slow-growing and tricky to produce in the nursery, especially in the spring while it is cool. Generally demand exceeds supply; however, thanks to the publicity generated by the P.P.A’s selection, we have secured a goodly number of these plants.

Although they often look small in the pot, they can be spectacular once established in the garden; best sited in morning sun and afternoon shade, in average garden soil that receives regular moisture, they are the epitome of grace. Like most ornamental grasses, they are deer-resistant.

They have a weeping form and the flowers are insignificant. The prettiest to my thinking is ‘Aureola’, gold with green stripes, height 12 to 15 inches. I have a patch that is at least 15 years old, about 3 feet wide, five feet long. It is intensely gold when it emerges in the spring, fading a bit when it heats up. An all-gold form, cleverly called ‘All Gold,’ has a similar growth rate and habit.

Taller and more vigorous at about 24 inches is ‘Albo-striata’, green with white stripes, and the species form, which is all green. This is a grass that looks great from April to October, doesn’t run and doesn’t seem to seed. It is particularly attractive draping down over the edge of a low dry wall (as can be seen at the Bonsai Pavilion at the National Arboretum) or next to a backyard pond. Like all slow-growing plants, they are relatively expensive; however, I know that if you plant this grass, you will be delighted with the results.