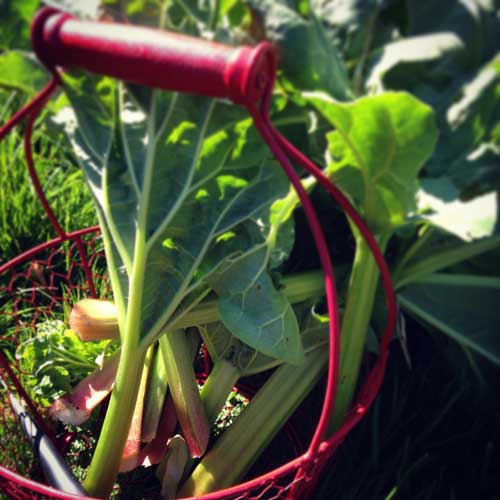 Rhubarb is a completely understated and under-appreciated vegetable. Consumed raw, it’s pretty horrifying. But rhubarb stems, prepared correctly, are absolutely deliciously tart; particularly when paired with a complementary fruit. Apples and strawberries are both fantastic and sweet counterparts.

For my little sister’s wedding, instead of a wedding cake, she chose to make individual pies in mason jars. We spent many months ahead of time testing and trying pie recipes. Up until this point, I was certain that my favorite pie was tied between Apple Pie and Pecan Pie. Then one evening she came to my house to test out a new recipe for Strawberry Rhubarb Pie. My mind was blown. I am telling you that this was hands down, the best piece of pie I have ever devoured. 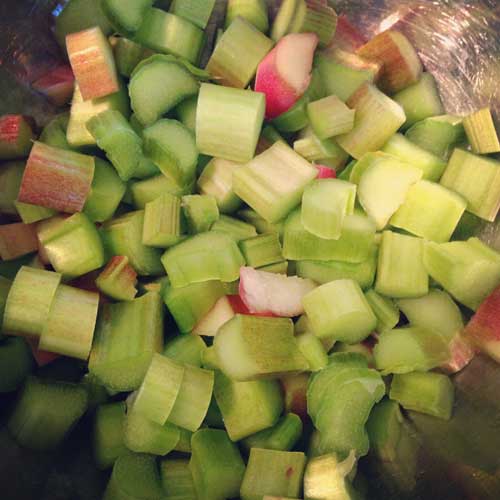 The rhubarb certainly adds a distinct texture to a dessert, but if chopped into bite sized pieces, the texture blends nicely with the other ingredients. In a strawberry rhubarb pie, it adds a slightly tart element to a sweet pie. Once cooked, the rhubarb stays more firm than the strawberries and keeps the pie from being texturally mushy. Also, rhubarb is best when picked and eaten when young; it is still tender and hasn’t hardened from the heat of the Summer.

It is very rare that I make a plain Jane jam or jelly anymore. Which, if you talk to my father, he wishes I would make more classics. But I prefer to make jams that I don’t see at the supermarket. My grandfather’s favorite jam was strawberry-rhubarb jam. I made it for him a couple of times and now I make it in his memory. It is as sweet as strawberry jam but with the same tart element as the pie. It is absolutely perfect on morning toast or served as a dollop over ice cream. But then again, perfectly acceptable straight from the spoon.

A few years ago, however, I discovered a very unique and delicious way to can rhubarb. I am continually surprised at how versatile this forgotten vegetable can be. A few years ago, on a whim, I tried out a recipe for Rhubarb Ginger Jam. The end result was like nothing I’d ever tasted. Slightly spicy because of the ginger, tangy because of the rhubarb and sweet because of the jam. It also had a distinctly Asian zing because of the grated ginger. We started using a couple tablespoons of the jam with and a splash of soy sauce and orange juice to create a quick marinade for pork, chicken or shish-kabob vegetables. I recently also heard from a fellow enthusiast that it is fantastic over ice cream as well. And as an added benefit, it is the lowest sugar jam that I have ever made; only calling for 2 cups of sugar rather than the usual 6-8.

I remember as a child that my mother had two large plants growing in her garden. We would periodically go pick several stalks through the spring and early summer and she would make up rhubarb crumbles. Usually, she would pair the rhubarb with apples and with blackberries from our canes.

I currently have six plants developing in my garden. They usually live somewhere around fifteen years. The first year, it’s suggested you do not harvest anything from the plant and just let it grow and flourish. The second season, only harvesting 1/3, and then in consecutive years, harvest up to 1/2 of the stalks annually. At this point, in its fourth season, I usually harvest about 3/4 and cheat a little bit. I leave enough on the crown so that it continues to thrive but take enough so I can do a few batches of jam.

Today I was able to harvest the first stalks from my oldest plant. It’s struggled a little through the transplant from our old home to the farmhouse, but is much stronger this season than last. The newer plants are still coming around and I hope so get some stalks from them in the coming days. Rhubarb is one of those veggies that many remember from their mother’s or grandmother’s gardens. But I am telling you it doesn’t have to be this way.

*[Editor’s Note: Rhubarb gardeners know, but some of Jessica’s readers may not, that when cooking with rhubarb, you only use the stems. The leaves are poisonous and must not be eaten.]