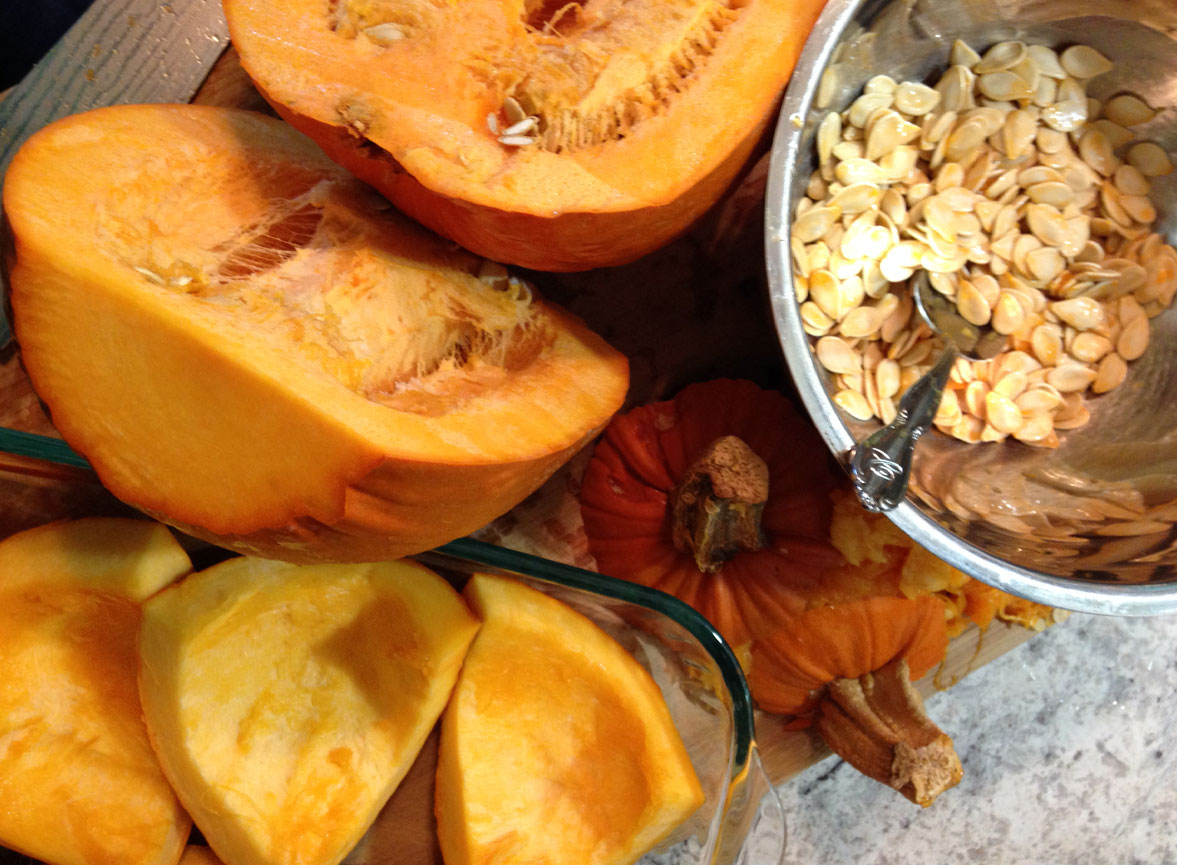 With it officially now fall, pumpkin mania has definitely struck the nation.  With what presumably began with the Thanksgiving tradition of pumpkin pie, the pumpkin craze has spread into what it is today.  I actually saw pumpkin flavored sausages at the grocery store this week.  Understandably so.  Pumpkin is a very versatile fruit; from savory to sweet and everything in between.  And most Fall and Winter squash are edible too, with the exception of gourds and other decorative varieties.

Last season, I saved the seeds from many locally grown pumpkins and fall squash.  We planted them in the Spring and transplanted the seedlings to our pumpkin patch in the early summer.  By late summer, we have harvested several varieties from the garden.  Our most productive in the patch were our ‘Sugar Pumpkins.’  This is a small variety, sometimes also referred to as ‘Pie Pumpkins.’  They are sweeter than common carving varieties and less fibrous, lending to a nicer pumpkin meat for cooking.  We also grew several of our own carving pumpkins, a couple ‘100 Pound Pumpkins’ that are still growing, and a small assortment of winter squash. 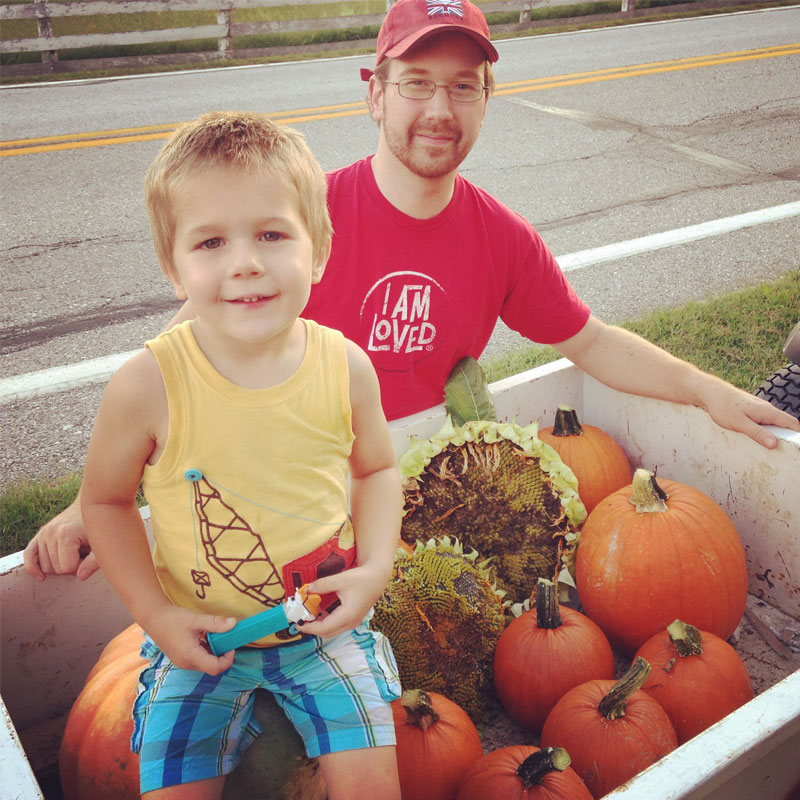 Most of the harvest is currently adorning our porch, where they will likely remain until Halloween.  After the holiday, they will be cooked down and added to the freezer or preserved in one way or another.  However, I was hit by the craze with the obvious signs of fall starting to emerge.  As my favorite season, I couldn’t resist baking a couple of our sugar pumpkins.  With our waste-not-want-not mentality in mind, we were able to conjure up many recipes from two little fruit.  Grayson and I made Pumpkin Pie, Pumpkin Pepper Jack Cornbread, Pumpkin Honey Butter for the cornbread and roasted seeds and still had several cups of puree to freeze for future use.

Making your own pumpkin puree is not only economical, I personally believe it is more delicious than store bought.  I like to be reminded when I eat something that it was once fresh produce rather than a store bought science experiment.  And roasting your own pumpkin is easy.  Again, most fall and winter squash are edible and can be roasted for consumption. 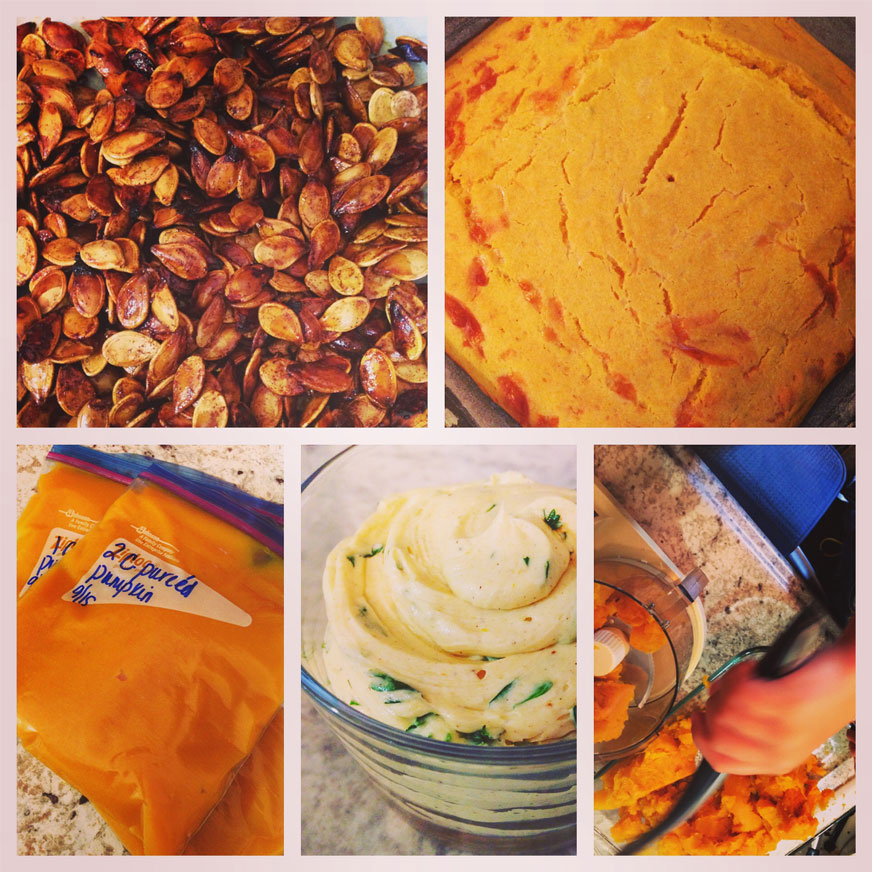 Cut the pumpkin in half lengthwise and scoop out the seeds and other guts.  The seeds can be set aside for roasting homemade pumpkin seeds.  Cut the pumpkin into uniform 3-4” squares and transfer to 9×13” baking dish.  Add water as needed to the bottom of dish to promote steaming and cover with foil.  Roast the pumpkin at 350 degrees for about 45 minutes until the pumpkin meat is fork tender.  Remove from oven and cool until you are able to handle the fruit.  The skins should remove easily at this point.  In food processor, pulse until uniformly smooth and lump free.  A little extra water may be required to get pumpkin moving in the processor. Use fresh or freeze for later.

Tip:  I like to freeze the puree in 2 cup increments, which is essentially equivalent to a standard can of pumpkin meat.