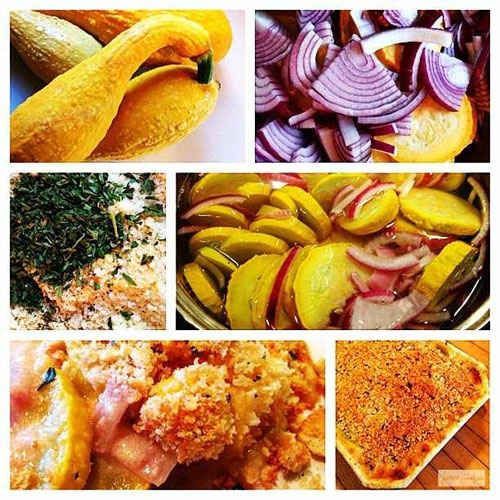 Although the heat was a little late to Summer’s party this year, it’s apparent that the seasons are gearing up to change. I saw the first signs of leaves changing this week on the Sumac trees. While some plants are still thriving in the garden, others are beginning to fade.

It’s time to get fall veggie and herb seedlings in the ground. My tomatoes are showing signs of defeat to insects and tomato blight, while the summer squash have surrendered to the vine borers. On the other hand, the pepper plants are still producing beautifully and flowering profusely.

As it’s nearing the end of squash season, chances are you’ve seen enough, grown enough or been gifted enough zucchini and squash by desperate neighbors that they’re losing their shine. As promised last week, I am providing another recipe for utilizing an abundant harvest. Summer Squash Casserole is an easy and cheesy bake that’s an easy and excellent side to most meals year-round. It also keeps well for leftovers.

Preheat oven to 350 degrees. In a large saucepan, boil onion and squash for 5 minutes. Drain and set aside. In a small saucepan, melt butter and add flour to make a roux. Over low heat, cook roux stirring constantly, for a few moments until it begins to turn a creamy brown in color. Gradually whisk in milk. Cook on medium-low heat until sauce thickens. Add Cheese, thyme, celery seed, salt and pepper. Once cheese is melted, add to squash and onions with 1 C of the Ritz Crackers; mix gently and pour into casserole dish. In a mixing bowl, combine parmesan cheese, Italian seasoning and remainder of crackers; sprinkle evenly over squash. Bake uncovered for 25-30 minutes until browned and bubbly. 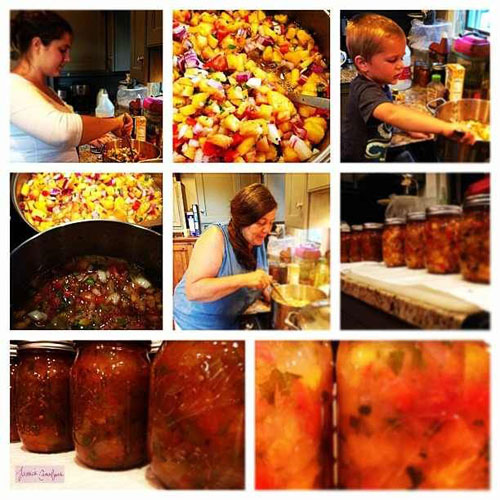 Although tomato season is winding down at the farmhouse, the harvest this week was still awesome. Once again, there was lots of blanching, peeling, coring, seeding and chopping tomatoes for canning and freezing. I managed to wrangle my sister and mother into making another double batch of tomato salsa and a large batch of peach salsa. But only under the pretense of a percentage of the profits.

The peaches came from my local and favorite pick-your-own farm, Larriland Farm  where I worked for 8 seasons starting at the age of 15. Grayson helped the three of us make the peach salsa. However, he’s only interested in stirring the pot, no pun intended. At his age, his tolerance for the kitchen is limited, but he absolutely enjoys being outside and in the garden. He even helped my Mom, his Jummy, in her garden this week.

After salsa night, Grayson and I returned to the garden and over the next couple of days harvested another countertop full of colorful heirlooms. After all the canned tomatoes I’ve already put up this season, it was time to get creative. So we made and canned pizza sauce!

Our family loves homemade pizza nights. Our local grocery store sells fresh pizza dough that thaws and proofs on the countertop for about $1 per crust. Between homegrown fresh and preserved ingredients and a fresh and tender pizza crust, we can affordably and more nutritiously have delicious pizza from home.

By the end of this week, I hope to have my fall garden under control and underway. I have been granting myself a little organizational forgiveness this year because we are involved in a full-blown farmhouse renovation and have been for months. That being said, it’s time to get those beets sown!