Jim Dronenburg is a long-time employee of Behnkes who also runs the Four Seasons Garden Club and is a certifiable plant nut and amateur rosarian, but claims no formal training in roses.  To my mind, he’s grown enough different roses – at least 40 varieties – over enough years that I want to hear what he recommends, which he did the other day at a seminar at our Beltsville location.

First, I want that Lady Banks climber Jim’s showing off in the photo above!  If only I had a large country garden like Jim’s to give it enough space.  Lady Banks is a species rose that produces flowers like crazy but no thorns, so handling it doesn’t endanger the gardener (like the “horribly thorny” ramblers do).  What it’s missing is scent.  Its scientific name is Rosa banksiae, which you can see from these images is a lovely muted yellow.  Lady Banks roses are remarkably disease-free.

Another species rose, Chestnut Rose, produces pink double flowers, and is slightly fragrant. (It’s shown here.)  Another is the Dog rose, or Rosa canina, which Jim wants, despite its flowers being “nothing to write home about.”  Well, I beg to differ – just look!  Not something for the vase, sure, but hundreds of these simple, single flowers on one old shrub is something I’d love to see.

Modern Hybrid Tea roses are the type of rose we’ve come to expect in vases, those big double flowers that come one on each upright, stiff stem.  Not only are they perfect for cutting, but they’re what Jim calls a “massive improvement over once-bloomers” because yes indeedy, they rebloom.  And while once-bloomers have their fans – lots of them – most homeowners now look for roses that bloom throughout the season.   The popular ‘Blue Girl’ shown on the left is, you’ll notice, more pinkish lavender than actually blue.  But then blue roses are the Holy Grail that breeders have been seeking for many decades.

Floribunda roses are also popular, with similar reblooming characteristics to hybrid teas, but the blooms come in clusters on each stem.

Speaking of reblooming, Jim warns us not to expect constant blooming – that’s something different, and maybe only annuals can boost that accomplishment.  It takes the plant three to four weeks to gear up for each subsequent rush of blooms, of which there are perhaps six throughout the season.

This very modern landscape rose was released to the market in 2000 and is now the best-selling rose in the U.S.  That’s because it blooms abundantly until December in our region, with almost a total lack of disease.  I’ve grown them myself and never seen a single speck of blackspot fungal disease, even late in the season.  The Knockout has won awards and many regard it as having single-handedly brought rose genetics from the 20th Century into the 21st Century.  Knockouts are now available in these colors:  red and double red, pink and double pink, rainbow, blush (very light pink) and the lovely yellow called Sunny.

Knockouts grow to about 4 by 4 feet, a perfect garden size, and I recommend them to almost all my garden-coaching clients.  For shorter shrub roses I love the ‘Flower Carpet’ and dwarf ‘Drift’ roses (photos coming soon of my new ‘Apricot’ purchases).

But back to Jim.  He likes Knockouts, too, remarking that they can take “enormous abuse” and are “indestructible”.

Also in a category by themselves are the modern roses developed by the English breeder David Austin.  He developed them in response to hybrid tea roses that had lost their scent, with upright forms that are harder to incorporate into mixed gardens (as opposed to stand-alone rose gardens).  And Austin’s roses are indeed are fuller, more shrub-like than hybrid teas, and they have amazing blooms, like the ‘Teasing Georgia‘ variety you see here. The bloom is beyond double – it’s quartered, according to Jim, with “zillions” of layers. And don’t you love that subtle apricot color! David Austin roses are also pretty good at resisting disease.

An important point about David Austin roses grown in our region is that they can be substantially larger than claimed – because our climate is so much warmer and sunnier than most sites in England.

Jim doesn’t mind a bit of blackspot himself and claims that his roses look like Bill the Cat by the end of the season but if you prefer a more robust look, he recommends using two different fungicides and spraying them alternately so the plants don’t develop a resistance to any one product. 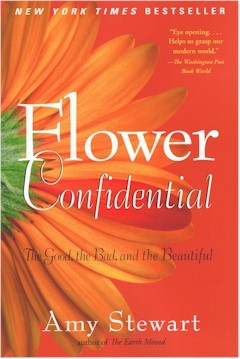 Jim does, and that’s why he grows his own for cutting.  To disabuse you of the very notion of buying just any old cut rose, he recommends reading Amy Stewart’s Flower Confidential.  I’ve read it, too, and agree that finding out what’s sprayed on the typical cut flower makes for some scary reading.  (Full disclosure:  Amy and I blog together at GardenRant.)

When it comes to flower arranging, Jim is of the “cram school” himself, choosing the informal look over the more studied, formal one.  So the less formal shrub roses are great for Jim’s arrangements – no stiff hybrid teas are needed.

Finally, true rosarian that he is, Jim also cooks with roses – think jams and jellies.  He also makes rose wine and says it’s easy, but according to his own mother, it’s “undrinkable.”  She compares it to drinking cologne.  (Okay, I’ll pass.)