In the Old Country
This staff profile starts in the Eastern part of Germany, where Helmut Jaehnigen was born 75 years ago. He went on to earn a masters in arborculture in 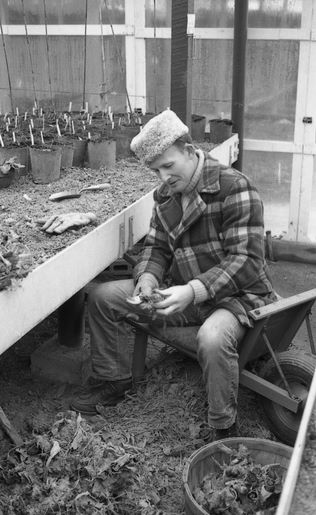 Heidelburg and pursued his career in Switzerland, Sweden, and Holland – countries that offered better pay than Germany at the time.

At Behnkes
In search of even better job opportunities, Helmut consulted a directory of nurseries in the U.S., where he focused on the East Coast – because that’s as far as his money would take him. When he learned that Behnkes sold plants to the White House, he thought “I’m going there!” and indeed, at the age of 25 he found himself hired, sight unseen, by Albert Behnke. Mr. Behnke had, however, seen Helmut’s resume, and recognized quality when he saw it.

So imagine Helmut arriving here in 1961, with limited English but an aptitude for languages. What did he find when he got off the boat? Lots of farms but not a lot of gardens, compared to Germany. And Behnkes wasn’t like the nurseries he knew in Europe – it was self-serve, for one thing. With carts! (In Europe customers gave their orders to salespeople, who gathered the plants for them.) He remembers Behnkes as very much a “mom and pop” store in the country – with a horse, a pair of swans, two ponds, and free gas for the employees.

Over the decades Helmut’s main job has been managing and buying our woody plants but talking to customers has been a big part of that and he fondly remembers some of the many famous customers he’s helped. (Three U.S. senators, including at least one Kennedy.) As Behnkes became more retail-oriented, this gave Helmut more opportunity to talk to customers and to become the gardening educator on local Channel 5 and 7 news, too. (Yep, he’s a talker!)
Fifty years later, Helmut still works at Behnkes because, as he puts it, “I can’t just quit.” Though according to Behnkes management, they won’t let him quit. Behnke granddaughter Stephanie Fleming says “We love him! The customers used to think it was HIS nursery.” And even now Behnkes has customers who call to ask when Helmut is working (part-time, finally) before coming in. 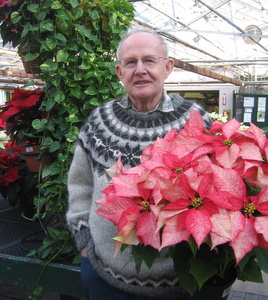 The Glory Days of Buying

Next to talking with customers and television audiences, Helmut’s other great career memories involve buying, which he loves to do. There were no big shows at first, which was fine with him because the alternative was flying all over the East Coast with Mr. B., and sometimes even to see the great growers of the Pacific Northwest. Behnkes owned a Cherokee plane back then, on which the two of them took jaunts to Canada to survey the Christmas tree farms.

Growers would pick them up at the airport, give them lunch and the finest cognac, and these two high-flyers would return the same day. Helmut loved the life – “I had it made!” Later, the growers would hire a private Lear jet to fly Behnkes and other DC-area nurseries to see their trees. “That’s the way to be a buyer – you were the king.”

The pride is obvious when Helmut relates that growers knew Behnkes wanted “the best of the best and the newest of the new” in plants, and got them – because the growers loved Behnkes. Why all the love? Behnkes was the second largest nursery in the U.S. during Helmut’s buying years, and was able to pay the growers quickly. (Plus, there’s that Old World charm.)
Buying eventually got harder, though: “‘Those damn computers – they done me in”. Because of computers, buyers really don’t have to travel anymore, though they sure need to be IT-proficient.

These days Helmut still attends the big trade show in Baltimore every January, where the tree growers greet him like their favorite uncle.

Off-Hours
Helmut is the proud papa of four sons, all of whom worked at Behnkes at some point in their lives. He and his wife now live in Columbia, where Helmut loves his garden.