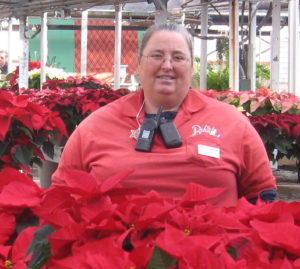 Next up, a Behnkes staffer whose story reflects the hire-from-within philosophy at work here, in addition to the work-really-hard ethic I keep hearing about as I interview the Behnkes team.  Just a year ago Sissy McKenzie here was “suddenly” made store manager at the Beltsville location, which she said took a lot of faith in her – and a lot of training, too – to help her move successfully from the growing side of the business to retail (not to mention as store manager.)

Like so many at Behnkes, Sissy is local to this area – very.  She grew up in Croom, Maryland and now lives about 10 miles away, near Brandywine.  She married just three days after graduating from high school (and they’re still married~!) and her first job was working at a local liquor store.  That job required driving around the whole D.C. metro area and she hated that, and soon sought work at Behnkes – in the growing division, filling plug trays.  (She remember making about $100 a week then – in 1985.)   She spent 25 years in the growing division, being promoted up the chain to eventually the job of head grower, until that sudden switch to retail in January of 2010 and her current job as store manager.

About the job of store manager

Not that she’s complaining, but Sissy did let it slip that in the growing side of the business there are distinct seasons, with pauses in between.  Pauses for catching your breath.  Not so with retail, where even after the Christmas season is over there’s no down-time because inventory has to be done this month (ugh!).   And the selling goes on unabated in January – of firewood, snow shovels, and houseplants.  Plus all the winter workshops that’ll be starting up in mid-January.   After that, she says that “Spring is going to slap us in the face by the end of February”.

Sissy works six days a week, plus working from home on her “time off,” and finds the job “very challenging”.   The worst part?  Managing the workforce, especially delivering the bad news to seasonal workers whose help isn’t needed after the season they’re hired for is over.   Everyone knows the seasonal lay-offs are coming but that doesn’t make it any easier.  I bet. 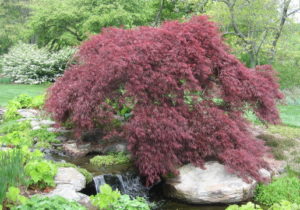 At home on Sundays, her precious day off, Sissy makes time to garden.  That high school sweetheart/husband of hers handles the veg garden and she takes care of the ornamentals – her beloved shrubs and perennials.  She specializes in low-maintenance gardening (smart!) and has a special affection for Japanese laceleaf maples.  (Great choice, and I’ve taken the opportunity to show off a lovely one at the Ladew Topiary Garden in Monkton, MD.)

Sissy and her husband, who works with the state highway administration, have a son who’s a corrections officer in Charles County, and two grandchildren.