Having moved just last month, I’m thinking a lot about my new garden and I’m determined NOT to repeat these mistakes that I made in my last garden. 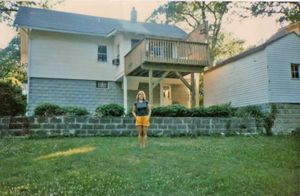 1.  Neglecting to take “before” photos is something I’ve regretted a gazillion times over the years.  It’s simply impossible for visitors to imagine the jungle-like state of my back yard when I moved in – I barely remember it myself.  This sole photo from 1985, while documenting the ugliness of the rear facade of my house in Takoma Park, faces away from the jungle.  It didn’t occur to me then to photograph the chaos.  (Also, I wish I’d taken some shots without me in them.)

But for my next garden – in Old Greenbelt – I quickly grabbed these photos from the realtor’s slide show about my new rowhouse, and I took a bunch more as soon as my offer was accepted – before all the leaves dropped.

Above, the perfect-size-for-me-back yard is, except for a few azaleas which will soon be offered to anyone who’ll dig them up, a blank slate.  Goody!  On the right is the view from the back door, where my new screened-in porch will go.  I’ve coveted these bug-free oases for years now and soon I’ll have my own!

Below, the front yard is all lawn with a few more azaleas (the default shrub for the Mid-Atlantic, no matter the exposure).  Like the azaleas, the lawn is doomed, to be replaced by some seating for sure, but what else?  That brings me to the next mistake I won’t be repeating.

2.  Not getting design help.  Now to be fair to my 1985 self, I did enlist the free services of a nursery’s designer for my back yard, and have thanked her a bazillion times for creating the bones of a great design and steering me toward great shrubs I’d never heard of (because they aren’t azaleas) like Viburnums, Pieris japonica and cherry laurels.  But I had a small budget and the garden was a DIY job, design-wise and plant choice-wise, and my mistakes still show.

Especially challenging was my small front garden – small spaces being much harder to design than larger ones – and I hated the result until finally (after nine years there) I paid all of $250 for a fabulous design that transformed not only the front garden but this gardener into the avid one I’ve been ever since.  (Here’s my 2006 story about the transformation and the landscape architect who made it happen.)

This time around, every square inch of my manageably sized garden will be professionally designed before the first daffodil shows its face in March.  Terraces and paths will be created and the larger plants installed before I start playing with the small stuff.  Can you see the determination in those italics?

Of course I’m still a cheapskate, but a lot of help can be had for not a lot of money – by asking for help with the overall concept and hardscape details, but choosing the plants myself.  And I’ll be supplementing a paid designer’s suggestions with free ones from blog readers.  Garden blogs don’t pay  much, but readers are very generous with their thoughts.

On the national blog GardenRant I asked readers to tell us about their worst garden mistakes, and got this interesting collection – very instructive!

What’s YOUR worst gardening mistake?  Tell us in a comment!