How about planting a little history?  The native Pawpaw Tree, Asimina triloba, could be the next conversation piece in your garden. The first records of this plant date back to the early 1500’s when it was written that the Pawpaw was a popular tree in cultivation for the Native Americans and the colonists.

Other records indicate that the Lewis and Clark Expedition subsisted solely on Pawpaw fruit when sources of food were scarce. Both George Washington and Thomas Jefferson enjoyed the fruit as a favorite dessert, and Jefferson even planted the tree in his garden in Monticello. But there are more reasons why you should consider adding a Pawpaw to your landscape.

The Pawpaw is unusual for a native plant in the mid-Atlantic in that it is a member of a primarily tropical plant family. This small tree, usually growing to less than thirty feet tall, looks as if it belongs in the Caribbean. But Pawpaw grows nearly any where in the Eastern half of North America from Ontario, Canada to Eastern Texas. Its commonality in such a widespread geography attests to its ability to survive with little or no care. Plant it in a partly-shady or sunny area and you can practically stand back and watch it flourish.

One trait that lends Pawpaws to being so carefree is the fact that they have special chemicals in their leaves which make them unpalatable to deer and most insect pests. In fact, very few insects have evolved enough to be able to make use of this plant, but it is critical for one of our butterflies, the Zebra Swallowtail. 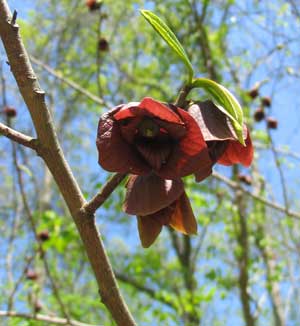 The Zebra Swallowtail, with its four-inch wingspan, is a remarkable sight. The butterfly boasts a striped pattern of black and white, with a spot of arresting red towards the base of its wings. The Pawpaw is the only host plant that this beautiful butterfly can use during its stage as a caterpillar. In addition, the Pawpaw is a host plant to the exotic-looking Pawpaw Sphinx Moth, a brown and white beauty with nearly a three-inch wingspan.

In spring, the Pawpaw sends out one inch wide six-petaled maroon flowers, which will produce three-inch long green fruit that eventually turn brown when they are ripe. Tasting the ripe fruits will remind you of banana or papaya custard. When ripe, the fruit is creamy and sweet, but beware, there may not be any left for you.

The fruit is also a favorite of many birds and animals who will hungrily await the still-green fruit to drop and ripen on the ground before snatching it up for a mid-fall feast. The fruits, however, must be either eaten, frozen or made into a jam soon after ripening, since they do not store well.

In my opinion, the flowers alone are worth having this tree. When most trees and shrubs are erupting blooms the color of cotton candy, the Pawpaw stands out with its deep purple/maroon flowers. Be aware, however, that you will need more than one Pawpaw to have fruit, since they need each other to cross-pollinate. Even after blooming, the trees stay attractive throughout summer with their elongate, tropical-like leaves, which turn yellow in autumn before dropping to the ground.

Pawpaws are currently being studied and cultivated by Purdue University. It is believed that the fruits are very nutritious and may have cancer-fighting properties. So if you would like to add to your edible garden, your butterfly garden, your spring-blooming garden or would just like an interesting tree with a rich history and a very easy culture, then Pawpaw is for you. Now (mid May) is a good time to plant this tree, before the summer heat.