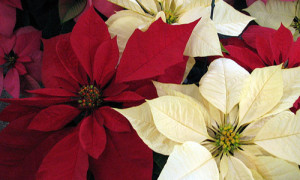 The holidays are here again, and among the icons of our celebrations is the beautiful poinsettia from south of the border. The history of this popular plant is indeed colorful, according to the University of Illinois, from which we obtain the following facts. As early as the 14th century, the Aztecs used the sap as medicine, and made a red dye from the flowers (actually modified leaves called “bracts”).

Moctezuma, one of the last of the Aztec kings, reportedly had poinsettias brought into (what is now) Mexico City by caravan because the plants didn’t grow well in the high altitude.  The botanical name was assigned to the poinsettia by the German botanist, Wilenow. Dazzled by its color, he named the plant, Euphorbia pulcherrima, meaning “very beautiful.” William Prescott, a historian and horticulturist, was asked to come up with a more user-friendly name as the poinsettia became more popular.

At that time Mr. Prescott had just published a book called The Conquest of Mexico, in which he detailed Joel Poinsett’s discovery of the plant. So, Prescott named the plant “poinsettia” in honor of Joel Poinsett’s discovery (missing the golden opportunity to name it the Prescottia).Completely irrelevant to appreciating the plant, but interesting to a few none the less, Joel Roberts Poinsett was the first United States Ambassador to Mexico, being appointed by President Andrew Jackson in the 1820’s.

At the time of his appointment, Mexico was involved in a civil war. Because of his interest in botany he introduced the American elm into Mexico. During his stay in Mexico he wandered the countryside looking for new plant species. In 1828 he found a beautiful shrub with large red flowers growing next to a road. He took cuttings from the plant and brought them back to his greenhouse in South Carolina. Even though Poinsett had an outstanding career as a United States Congressman, as an ambassador, and as Secretary of War in the van Buren administration, he will always best be remembered for introducing the poinsettia into the United States.

Modern poinsettias have been bred to be even more beautiful, and every Christmas, colorful poinsettias bring holiday cheer inside our homes. From the Ecke family, who have been bringing us the poinsettia for over 100 years, comes the following traditional tale:

Pepita, a poor Mexican girl, had no gift to present the Christ Child at Christmas Eve services. As Pepita walked slowly to the chapel with her cousin Pedro, her heart was filled with sadness. “I am sure, Pepita, that even the most humble gift, if given in love, will be acceptable in his eyes,” said Pedro consolingly. Not knowing what else to do, Pepita knelt by the roadside and gathered a handful of common weeds, fashioning them into a small bouquet. Looking at the scraggly bunch of weeds, she felt more saddened and embarrassed than ever by the humbleness of her offering.

She fought back a tear as she entered the small village chapel. As she approached the altar, she remembered Pedro’s kind words and felt her spirit lift as she knelt to lay the bouquet at the foot of the nativity scene. Suddenly, the bouquet of weeds burst into blooms of brilliant red, and all who saw them were certain that they had witnessed a Christmas miracle right before their eyes. From that day on, the bright red flowers were known as the Flores de Noche Buena, or Flowers of the Holy Night, for they bloomed each year during the Christmas season.