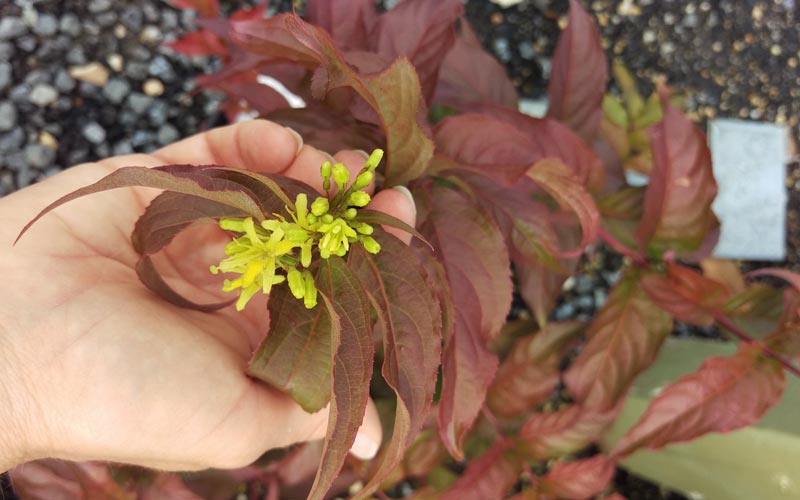 Diervilla – Bush Honeysuckle
Don’t let the name fool you – these are not “real” honeysuckles (though they are related) and do not become thugs like the invasive, non-native honeysuckles. These shrubs are native to the eastern U.S. and can be found from the northern central states to the southern Appalachians. Trumpet-shaped yellow flowers appear in summer and the foliage on many ornamental forms can be bronze, orange, reddish or purplish, especially in spring and autumn. Thriving plants may sucker in good conditions, but will not take over. They are at their best in full sun to partial shade, and are tolerant of dry soils. While they don’t have a scent, they flowers are popular with pollinators and aging blooms can turn reddish-orange. Older stems develop peeling bark that can reveal orange inner color. Numerous decorative varieties have been introduced in recent years, including a variegated form and a hybrid of the two native species that has rich reddish-bronze to plum foliage in summer. If you’re doing a native garden, they’d look great with the colorful-foliaged Ninebarks, creeping Junipers, Moss Phlox, grasses like Switchgrass or Bluestem, and dwarf Eastern Arborvitae. 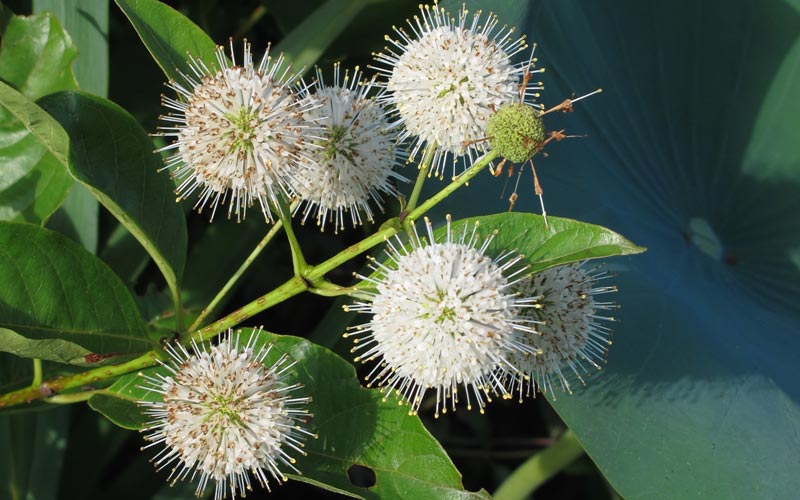 Buttonbush
An unassuming shrub for most of the season, this native has unique spheres of white flowers in summer that are a magnet for bees, butterflies, and other pollinators. Happy with wet feet, it can even be grown in the swampy ground adjacent to ponds and creeks. While tolerant of a fair amount of shade, they do best and flower at their peak in full sun. Some plants will even develop surprisingly bright fall colors for a shrub that isn’t known for this feature. On wild plants, size can vary considerably, but for cultivars, they tend to be compact and consistent. Seed clusters start out a rosy red before maturing and are eaten by various waterfowl and other wet-habitat birds. While they don’t have to be grown wet, they would not appreciate drying out, and average garden soils should be just fine. Companions can include wet-meadow perennial natives such as Turtlehead, Joe-Pye Weed, Swamp Hibiscus, Blue Flag Iris, Lobelia, and Vervain;  and shrubs or small trees such as Serviceberry, Blueberry, Chokeberry, Summersweet, Sweetspire, Meadowsweet, and Winterberry holly. Given their tolerance for root flooding, Buttonbushes are great for rain garden basins, near leaky gutters or faucets, or low-lying ruts in the yard that always seem to stay squishy-wet a couple days after rain. 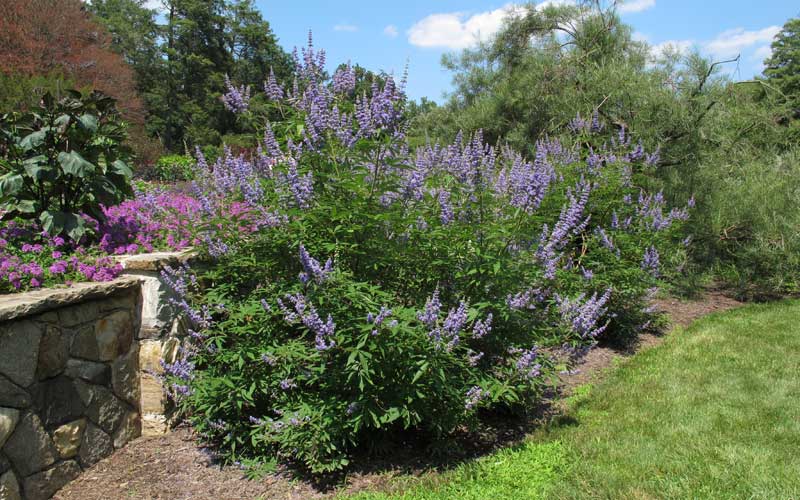 Vitex (Chastetree)
Definitely more of a shrub than a tree, this flowering shrub can grow quite large, but there are several new dwarf forms available that are great for limited space. Flowers are tapering spires and will remind you of Butterfly Bush, though not with the same fragrance, and leaves resemble Japanese maple. Blooms appear in summer in shades of blue-lavender or, in the case of a new introduction, pastel pink. Foliage is quite pungent when crushed, making them reliably deer-resistant. Pollinators will visit the flowers, and leaves will turn amber, muted orange, or mocha in the fall. Growth rates on the taller varieties is fast, and they can be pruned to look like a small tree, much like crepemyrtle. Where does it get its name? Apparently the seeds and leaves contain compounds once used as an anti-aphrodisiac in its native Mediterranean. Either way, it’s great for drought and poor soils, preferring full sun and the occasional application of lime. Good companions that bloom at similar times include shrubs like Panicle Hydrangea, Butterfly Bush, Crepemyrtle, Summersweet, and perennials like Culver’s-root and Russian Sage.