It’s Fall, Halloween and Thanksgiving are right around the corner, and it’s time to put your fall decorating and cooking into high gear. We are here to help. Every Wednesday in the fall, at 5:30AM, Alfred Millard, Behnke’s president and pumpkin buyer (it’s just that kind of place) heads to Pennsylvania. 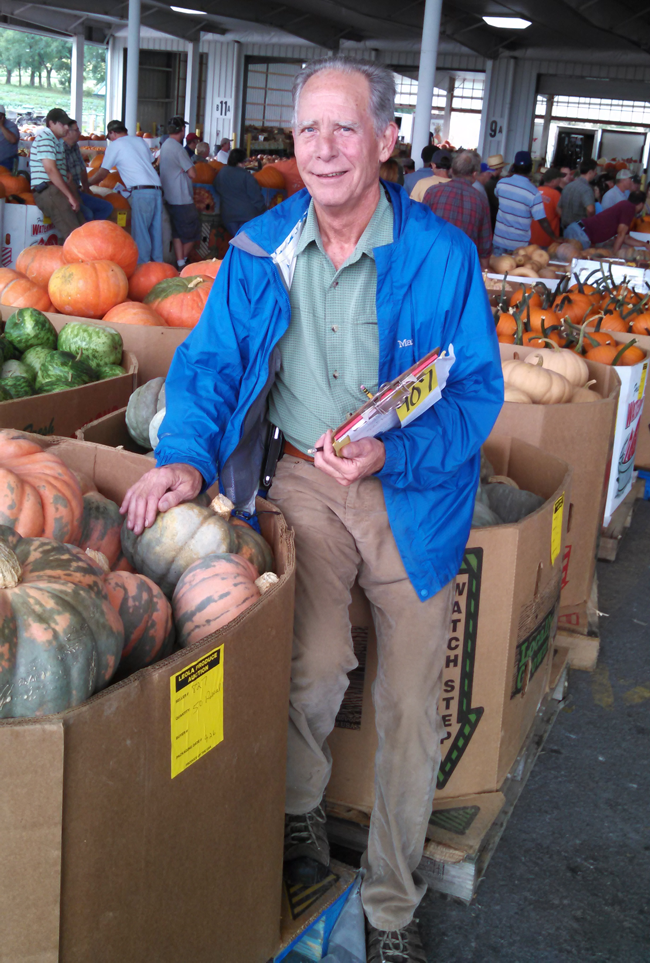 The goal: to bid at a wholesale famer’s produce auction and return with a couple of truckloads of the freshest pumpkins, squash, decorative corn, gourds and other fall decor.  The auction is in Leola, deep in the Amish farm country. If the traffic gods are kind, we get to the auction about the time it opens, at 8AM.  There are usually a couple of hundred bidders, buying for farm markets, garden centers, and other produce outlets.  There are always some horse-drawn carriages, as the farmers mingle with the buyers during the auction.  Wednesday is the big day for pumpkins, with other days being devoted exclusively to other produce, but even on Wednesdays we see thousands of apples, colossal cabbages, even some end-of-the-season tomatoes and peaches. 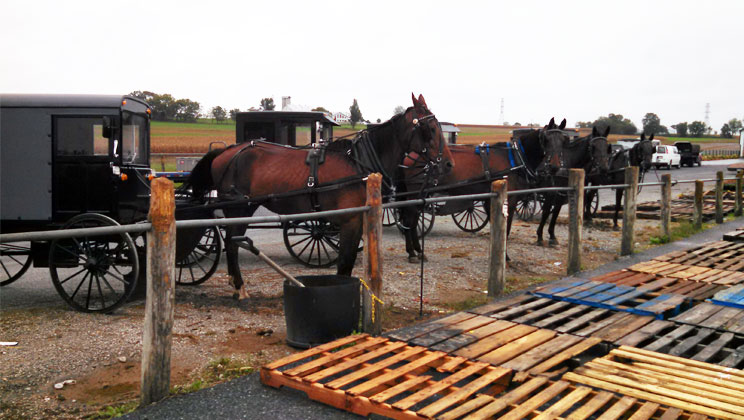 The auction moves very quickly, with at least two auctioneers operating at the same time.  It has to move quickly–the area is easily the size of a football field, and it takes at least 5 hours to sell down to the last box.  Scratch your nose and you might wind up with 20 cases of gourds.  The produce is in cases or large cardboard crates called gaylords.  They are in long rows, and the auctioneer walks the row, points at a crate, begins the auctioneer’s chant, and the bidding begins.  It takes a while to understand what the auctioneer is saying, but you pick it up. (You don’t want to raise your hand and say: “Sorry, can you repeat that.”) Each lot is sold in about 20 seconds.

Meanwhile, sold produce is moved to the loading dock, which has room for about 15 trucks.  Everything is moved by horse-drawn forklifts, and…no, that’s too romantic.  Genuine fuel-powered forklifts run up and down the aisles and quickly get everything to the docks. By 2PM the place is pretty empty, and they are preparing for the next day. 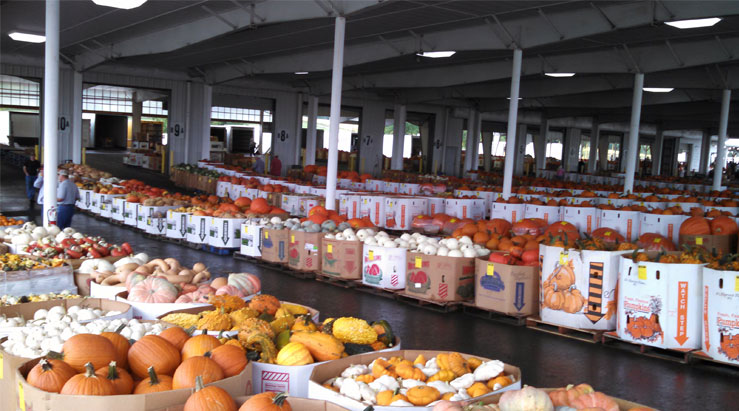 As a fancier of ornamental plants and a shade-gardener, I admit to not having known much about pumpkins before we started going up last year.  Pumpkin.  Orange thing.  Round. Carve it, set it out for the kids or squirrels to beat up.  Yawn.

I was, however, amazed at the variety of pumpkins/squash/gourds available, and after each trip I add a couple of pepos to the autumn display at my front door.  (Botanically, a pepo is the type of fruit made by plants in the squash/pumpkin/gourd plant family: it has a rind which may be soft or hard, possibly a fleshy wall under the rind, and maybe some goop to accompany a bunch of seeds inside.) Each time I see a new variety, I jump up and down like a kid, and try to get Alfred to buy it. Good thing I don’t bid; no poker face.  I’m like a kid at Willie Wonka’s Pumpkin Factory.  We are not only looking for cool pumpkins, but we also try to get ones with long handles, a quality which adds to the general pumpkin mystique.

Here are some of the unusual pumpkins we have this year:  If you can resist carving them, many of them are also cooking pumpkins.  For more on cooking, look up the individual varieties on line. 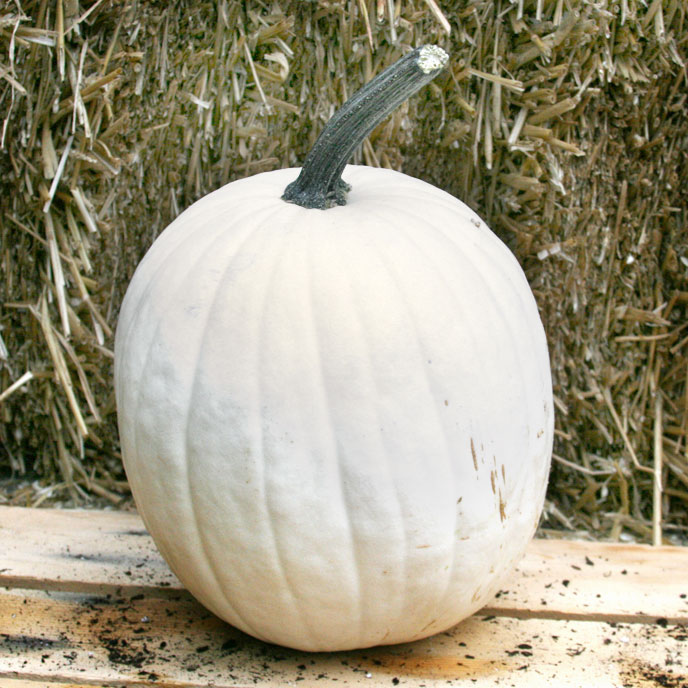 Cotton Candy: a pure-white-skinned pumpkin with white instead of orange flesh, it's a cooking pumpkin as well as ornamental. Very ghostly. If a pumpkin died and was haunting your house, it would look like this. 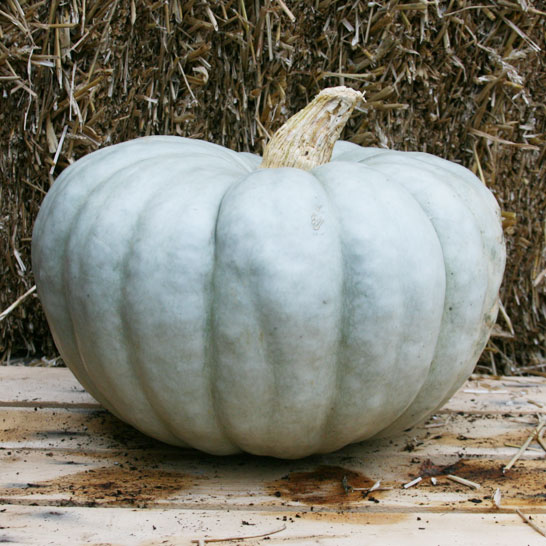 Jarrahdale: an heirloom pumpkin variety from New Zealand, this is a squat, deeply-ribbed pumpkin with a blue-green or gray skin. Totally scary as a jack o' lantern, also a good cooking pumpkin. 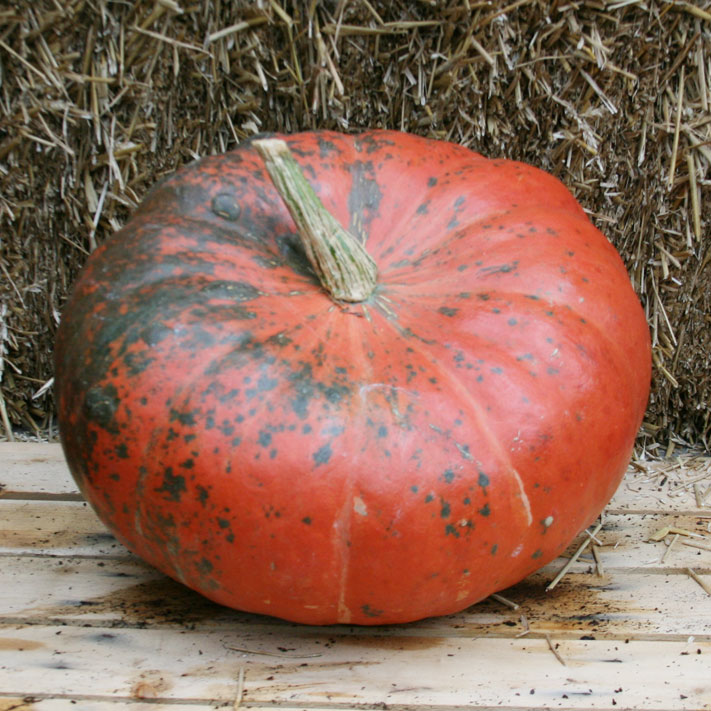 Cinderella (Rouge vif D'Etampes): put me in a coach! A French heirloom pumpkin, very short and full, whimsically-shaped like Cinderella's coach, it ripens from green and orange to a deep, deep orange. Great for cooking. 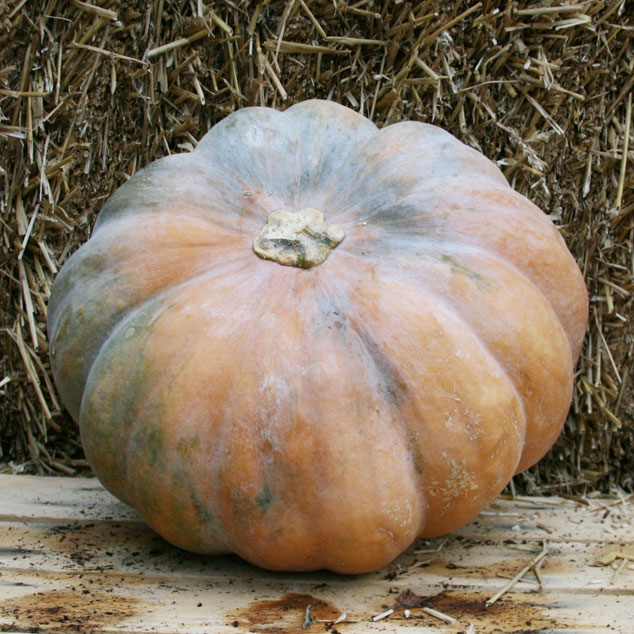 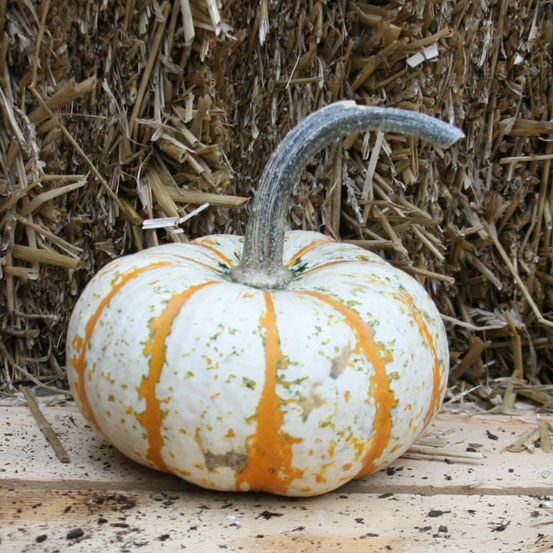 Little Pum-Ke_Mon: cute as a button, little guys with a cream skin and orange-colored grooves, can be steamed or baked. A pile of these on the table would make a great beginning to a table centerpiece. 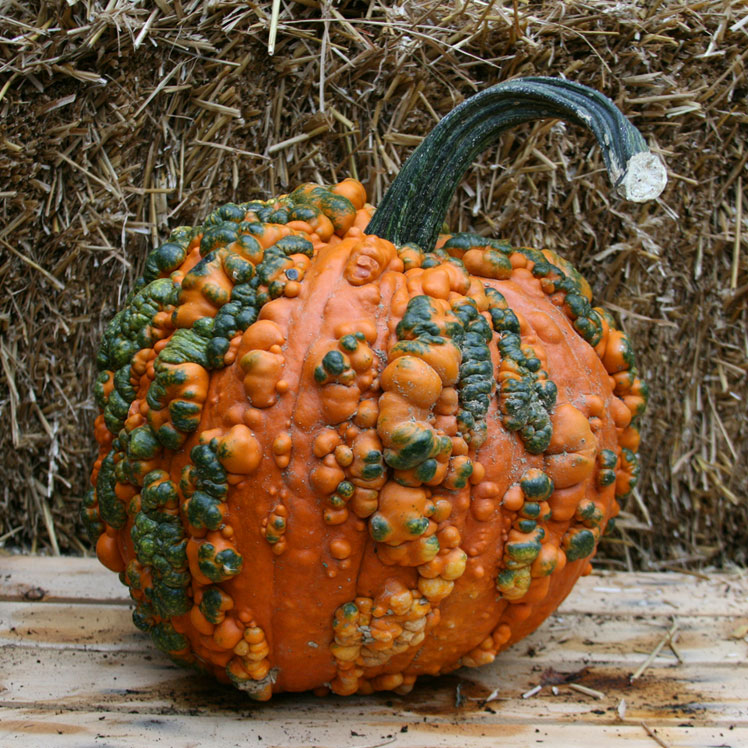 Warty Goblin: covered with deep green "warts" that eventually turn yellow, with a hard shell that is difficult to carve. Very distinctive! 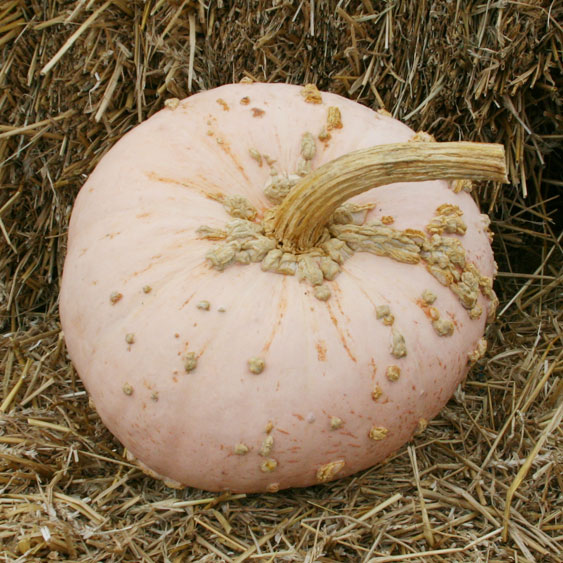 Galeux d'Eysines: yet another French heirloom, with salmon-pink skin covered with tan "warts" that look a lot like peanut shells. Thick-fleshed and great for soups and sauces.

There will be others through the season, along with gobs of gourds and the classic orange pumpkins, from tiny to “prize winner” size in the 100 pound range.