I moved from Takoma Park to Old Greenbelt almost five months ago and though my house and back yard are still messy, dirty construction sites, I finally have something  to show off – the front* garden.  I could show you a “before” photo of it but trust me – it was all lawn, nothing but lawn. 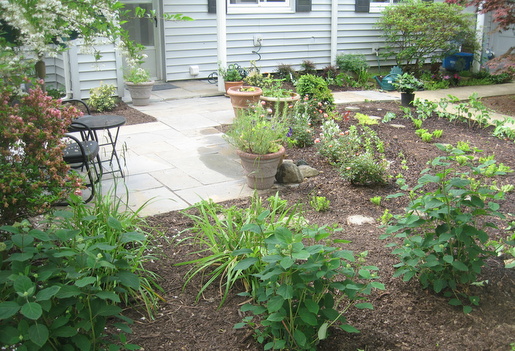 So, here’s a good view of the new flagstone patio, in two connected rectangles – that’s the construction project that had to be done before I could start planting.  So finally!  I love sitting in the garden and a landscape architect friend suggested this flagstone patio because the color complements the gray building.  And what the heck – flagstone is beautiful.  We made it large enough to be connected to the front door and still extend out into the yard where the sun is in the morning.   Surrounded by humongous oaks here in Old Greenbelt, I feel lucky to have almost full sun on this 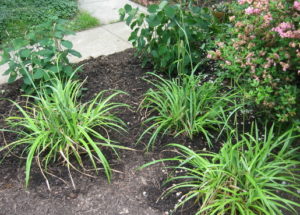 side of my house, which I’ll enjoy even more with the help of an easy-crank market umbrella, for when the sun is too much.

In the foreground of the photo are the three Invincibelle Spirit Hydrangeas (H. aborescens or smooth, Annabelle-type hydrangea) that I’m excited about.  It’s a bit shorter than Annabelle, reportedly on stronger stems that are less likely to droop, and it’s PINK.   I’ve never grown this type of hydrangea before but it’s native to our region, blooms a long time, and likes the partial sun/shade I could give it here in this spot.  On the right is another view of the Invincibelles, shown behind the Japanese Carexes that do a great job creating filler in a new garden.  These rather dull but very useful plants are from my old garden, where they won’t be missed, as they’re just three of dozens of divisions from the original plant I bought 25 years ago.

Back to the hydrangeas – notice I bought three of them?  Despite the smallness of this garden, I’m trying my best to avoid the dreaded “onesies” – the tendency of plant-lovers like myself to buy one of everything.  You know the look – interesting, but kinda chaotic?    Even in tiny spaces, massing of plants is essential for the type of garden I seem to like best, so that’s the goal here. 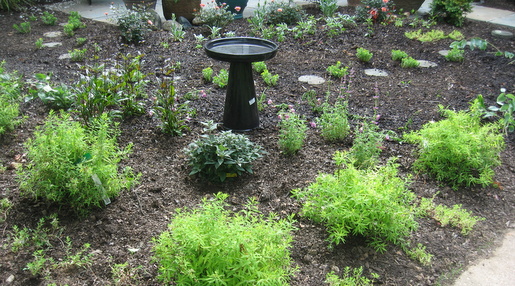 Above is another example of massing – this time of the chartreuse-leaved Spirea ‘Ogon’ that you see in the foreground.  It’s one of several light-colored Spireas that breeders have brought to the market lately and they add enormously to the garden all season, long after their blooms have faded.  (This one has white blooms in very early spring.)  They’ll grow quickly to about 4-5 by 4-5 feet.  I bought five and am considering buying two more to complete the short hedge they’ll eventually create.

The simple black bird bath was chosen it because it matches the black patio furniture and it’s so new, I notice it still has the price sticker on it (from Behnkes).  Around it are other bird and butterfly-attracting features – some Agastache (the best plant I’ve ever grown for attracting hummingbirds), some ‘Red Husker’ Penstemon and a dwarf, sterile butterfly bush called ‘Blue Chip’.    I’ll be adding more plants to fill out the space and attract still more critters for me to watch from my patio and kitchen window. 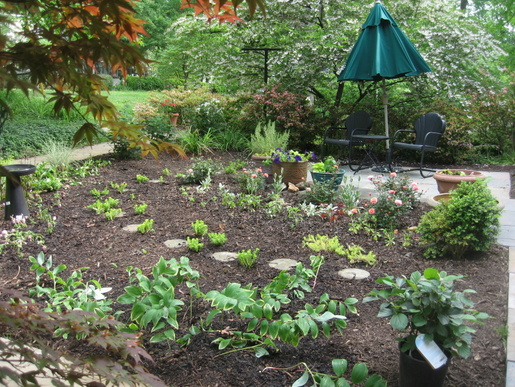 From another angle you see, in the foreground right, the Fothergilla ‘Mount Airy’ that’s so new I haven’t even planted it yet.   I think it’ll be happy in that shadier side of

the garden, where it’ll grow to 5 x 5 feet.  Also native to this region, Fothergillas are becoming very popular, and this recent introduction by Michael Dirr is proving to be a big hit.  Here’s Rick Darke’s excellent article about Fothergillas, one of his favorite plants.

Also in the foreground are some Solomon’s Seal that were given to me by a former neighbor (because once you’ve grown this plant a few years, you always have extras to give away).   It may be serving only as temporary filler – if I can find something that fills in that space year-round.  Solomon’s Seals disappears altogether in the winter, so I’ll be looking at bare ground there by November.

On the right is a closer look at the stunning Japanese Snowbell that’s technically my neighbor’s but the view and the fragrance are mine to enjoy. 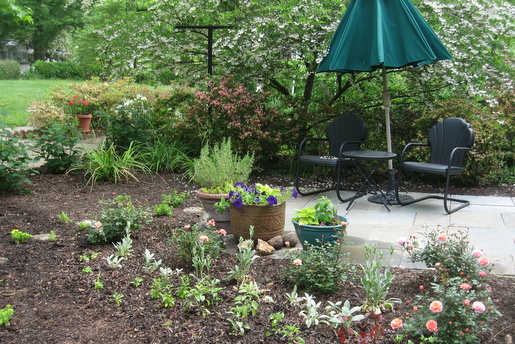 Above you see the five Apricot Drift roses that I’m very excited about.  Like the extremely popular Knockout family of roses, Drifts bloom repeatedly throughout the season and are virtually (or literally) disease-free.  These guys will spread a bit to fill in, but won’t get any taller than a foot and a half or so.  True groundcover roses.

In front of the roses are a few Lamb’s Ears that a neighbor gave me, along with the weedy-but-beautiful Rose Campion (a weed to some, a beauty to my eyes), and a bunch of annuals that I’m hoping will make a big splash here this year, making up for the newness of all the shrubs and perennials, which won’t make a big splash until their second and later years.

In the pots are more annuals – especially Salvia, Petunias and sweet potato vine.   They’re SUCH great performers, I’ll be growing them even after the rest of the garden mature. 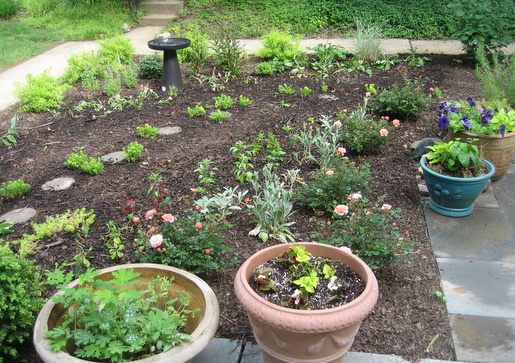 Above is the view as I step out the front door.

Here’s a view of the foundation plantings, with some empty spots still to be filled in; e.g., in front of the old (existing) azaleas on the left.  This is the northwest side of the house, so foundation plantings get just an hour or so of late afternoon sun.   To the right of the door are three ‘Burgundy Wine’ Nandinas I just bought, chosen because the red foliage matches the red of the large Japanese maple nearby in my neighbor’s yard.  In front of them I’ve planted some of my favorite Euphorbias – E. amygdaloides.  It prefers almost complete shade and best of all, is evergreen.  I had lots of it in my last garden and the current owner was kind enough to give me a few.

On either side of the front door are two brand-new ‘Goshiki’ Osmanthus – and here’s a close-up.  I’ve admired one growing along the north side of the Brookside Gardens Visitor’s Center, where it brightens up an otherwise dark spot, and finally have the perfect spot for two of them.  They’ll grow slowly to 4-10′ by 4-10′, but can easily be kept within bounds with a little pruning. 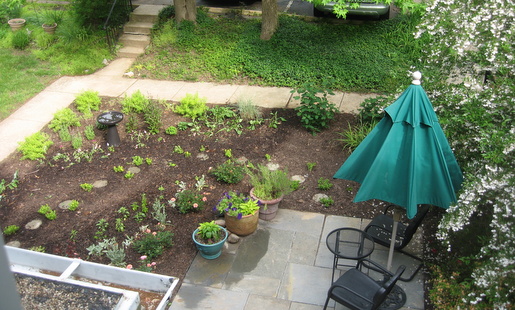 Finally, the view from a second-floor window.

How to Make a New Garden without Breaking the Bank

I’ve used the garden-starting techniques that I recommend to my garden-coaching clients all the time, so I’ll summarize them here.

*Here’s a historical anomaly about the “New Deal Utopia” that is Old Greenbelt.  It was designed to be accessed by interior sidewalks, not by car.  So what we think of now as the back side of the homes, facing those interior sidewalks, is architecturally the front and officially called the “garden side”.   And what we now think of as the front, because it’s how visitors arrive from the parking lot, is where the garbage-can closet is located and so to this day is called not the “front” but the “service side”.  Quirky, huh?