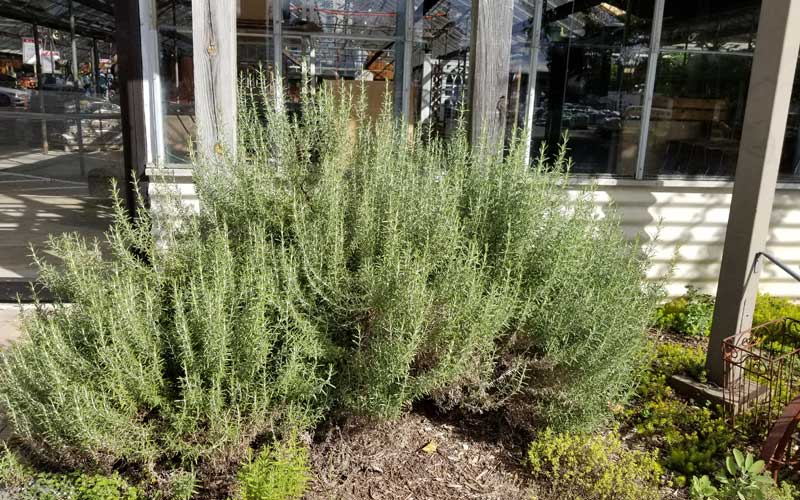 Planted at one of our exits on two raised beds, we’ve had an herb garden for six or so years.  The garden was started in existing beds that were originally filled with an organic soil mix (some sort of potting soil) which is now so old that it has aged to the point where it drains very well and doesn’t hold water very well.  It is against an uninsulated wall so it’s warmer in the winter than the ambient air.  It faces south so it gets a lot of sun.  I like the culinary herbs, so that’s what I plant.

Rosemary loves it in this bed. We lost the plants in a particularly cold winter two or three years ago, but replanted and have large shrubs again.  Rosemary does very well here as long as it has some protection and excellent drainage. We grow what is usually called “Hill Hardy” but according to DeBaggio’s Herb Farm and Nursery in Virginia, is more properly called “Madelene Hill.”

Oregano: very aggressive and has taken over a large chunk of one of the beds. The bees love this plant.  I cut it back after flowering so that the new fresh foliage looks nice in late summer/fall.

Sage: I don’t know exactly what goes wrong, but it seldom lasts a season for me.

Parsley: very easy, we have some issues with leaf hoppers feeding on it but for the most part, we ignore them. When we are lucky we get swallowtail butterfly caterpillars. Needs more water than the perennial herbs.

Lemon Grass: fast growing, it makes a large, attractive ornamental clump of slightly bluish-green grass by the end of summer. Lemon scented foliage, and you can harvest all you need for Thai cooking.  Tropical so it won’t make it through the winter outdoors.

Basil: I planted the herb garden just so I could get some basil going. Basil needs heat and is disease prone if planted too early. Wait until mid-May and you will be happier. Keep cutting it through the season to keep it from going to seed, and you are best if you plant a second set during the summer to replace the first as it gets woody and less tasty.  Also an annual.

Lavender: have usually lost it during the winter (or the summer if it’s really hot and humid). The variety ‘Dilly-Dilly’ came through the winter of 2017 very well and flowered heavily last summer.

Marjoram: we find that it makes a fairly compact clump and doesn’t spread aggressively like the oregano does. We grow the golden variety (‘Aureum’) to add some color to the garden.

Thyme: we find it does well for a couple of years, then gets twiggy and pretty ugly. It works best if it is replanted with fresh plants.

Chives: if you can’t grow chives, you probably shouldn’t mention it, because it’s a pretty tough plant. I like the pink flowers, although, truth be told, I don’t like the smell or flavor of chives. Make sure to deadhead before the seed ripens or you will have it coming up all over.

To see a truly amazing herb garden, make sure to schedule a trip to the US National Arboretum in Washington, DC.  Their herb garden is huge, with all sorts of interesting plants, culinary and otherwise.