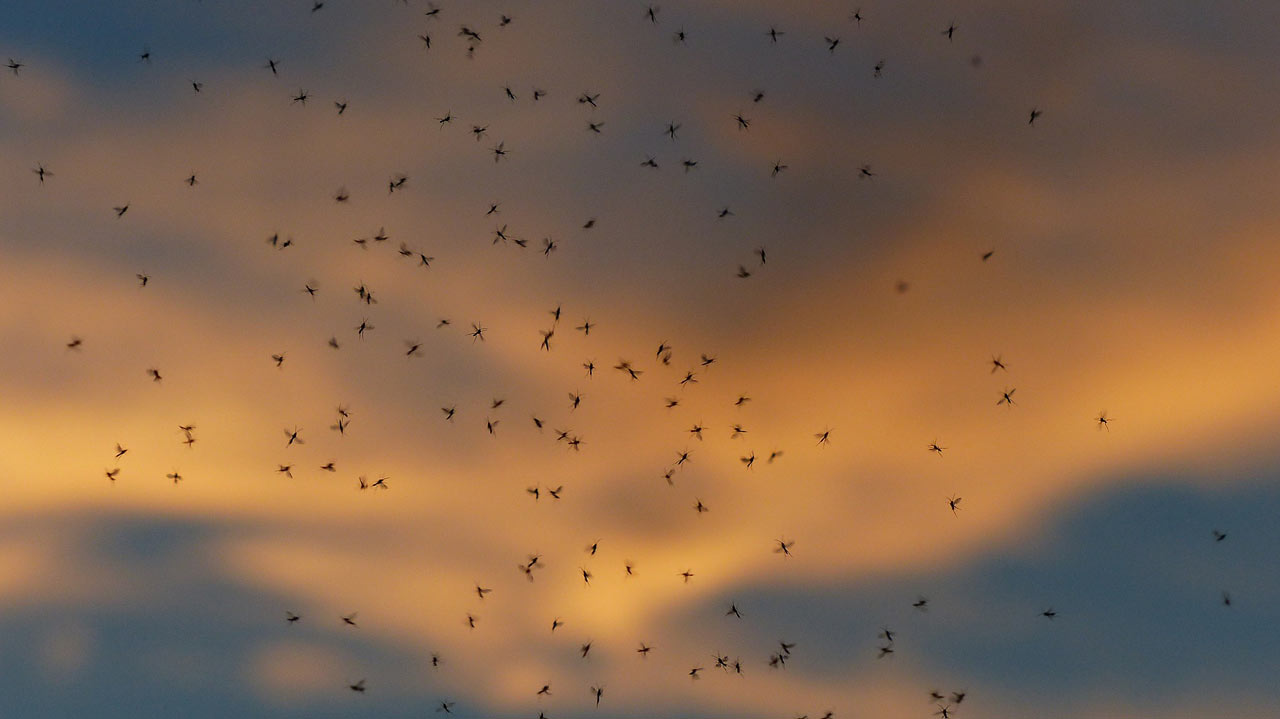 We’ve all been there: you’re out on a nice, summer evening, trying to relax, but the constant whine of mosquitoes near your ears and the sharp pricks of their bites, leaves you stressed out, thinking of the itching in your future and so you make a hasty retreat indoors.

Mosquitoes are irritating and responsible for spreading many viruses.  At a talk I recently attended by Behnke’s own horticulturist, Christopher Lewis, I learned how to cut down on mosquito populations and protect yourself from bites.

Although our native mosquitoes generally come after you at dusk or after dark, the invasive Asian Tiger Mosquito feeds during daylight hours. These are the ones that go after you when you are gardening in the shade on a nice summer’s day.  They breed successfully in small spaces like niches in tree trunks where a branch has broken, rotted and left a hollow spot.

First, Eliminate Standing Water
Mosquitoes can breed in a water source as small as a plastic bottle cap.  And it only takes 6 days for an egg to become a fully formed adult.  Common breeding areas include poorly draining gutters, whether from a block or an improper slope, plastic kids’ toys, birdbaths, trash, saucers under plants on your deck, and  even rain collecting in the folds of a mulch bag left out too long and in the ridges of downspout extension tubes.  So, clean your birdbaths once a week, fix your gutters and look around for other potential water collection sites.  If you have dips in your yard that create ephemeral pools, lasting only a day or two, there’s no need to worry about them.

Use Mosquito Dunks
If you have intentional standing water, like a pond, you’re in luck.  Mosquito dunks, sold as pellets or in compressed donut-shaped discs, are extremely effective in killing mosquito larvae.  The primary ingredient is a bacterium that only attacks mosquito larvae, making them safe to use in your pond, birdbath and around pets and children.

Use Sprays and Lotions
There are three chemicals that have been proven extremely effective in protecting you from mosquitoes: DEET, Picaridin and Permethrin. Though some people are wary of using chemicals, all are safe when used correctly, just remember to always follow the instructions on the label!  Click here for a good article on applying bug spray correctly.

DEET can be sprayed on clothing and bare skin (provided you’re not going to put clothing over the sprayed skin).  Don’t be lured in by products with higher concentrations; there is no added benefit to anything over 35% DEET.  It works by messing with a mosquito’s neurons, affecting how they perceive odors.  While it has long been considered the gold standard of mosquito repellants, some studies have concluded that prolonged exposure may result in negative health effects and some people may experience skin irritation.  It also has the capability to damage some plastics, so keep it away from your sunglasses!

Picaridin is a synthetic version of a compound found in black peppercorn plants and has only been available in the US for a little over a decade.  It is almost odorless and as effective as DEET at repelling mosquitoes and ticks, but more effective at repelling flies, should they be a bother to you (this is great if you’re going on vacation somewhere with high concentrations of black flies or midges).  It can be used on bare skin and fabric.

Permethrin is used on fabrics (clothing, tents, etc.) to kill mosquitoes and ticks on contact.  It should always be sprayed on clothing before wearing it (you can even buy clothing that has been pre-treated with permethrin, the effectiveness of which will last longer than home applications, through many washings).

A lot people would rather forget the chemicals altogether and use formulations with naturally-derived oils.  The best of these are products containing lemon eucalyptus oil, which is third in line after DEET and Picaridin at keeping mosquitoes at bay.  Other natural repellants are not as effective as those listed above and will have to be reapplied more often (if you only plan to be outside for an hour or so, this might not concern you).   Also, keep in mind that just because something is “natural,” doesn’t mean it’s safe; do your research and discontinue use of any product if skin irritation or rashes occur.

Use Fans
Mosquitoes are weak flyers and have trouble in a breeze.  Plus, fans scramble the body odors and carbon dioxide that you give off, making it hard for mosquitoes to find you.  So if you’re planning on staying in roughly the same spot, say while eating dinner al fresco, set out some fans.  Just make sure your napkins are weighted down!

Other Methods
There are many other products on the market which claim to repel mosquitoes, most of which have little to no effectiveness.  These include noisemakers (electronic devices that either buzz in imitation of mosquitoes or emit a high pitch, supposedly to frighten off mosquitoes), citronella candles (while citronella oil does have some effectiveness, the amount released by candles is not enough) and wearables like wristbands treated with natural oils (they may protect your wrist, but are too far away to protect your legs).  Sadly, plants aren’t very effective deterrents either.  Yes, Behnke’s sells Citrosa geraniums (some people mistake them for the citronella plant—they aren’t actually related), which may be effective if you’re sitting in one, but it’s not going to be very effective if it’s 5 feet away.

Broad yard treatments are not recommended, whether it’s a hired service or a do-it-yourself spray.  They use undiscriminating chemicals that could kill honeybees and other beneficial insects.  Plus, there’s the chance of mosquitoes building up resistance.  And while there are workarounds to these issues (spraying at night when other insects aren’t out, rotating chemicals, etc.), it’s best to try the above measures first.

Talk to Your Neighbors
Mosquitoes don’t fly far from where they’re born, but  if you don’t live in the middle of nowhere, that could still mean a mosquito born in your neighbor’s yard will inhabit your yard too.  If your neighbor has standing water, you could have a mosquito problem.  Conversely, if your neighbor hires a service that’s spraying willy-nilly, it could kill beneficial insects in your yard.  So, talk to your neighbors about environmentally-friendly mosquito abatement.

Berkleys For The Birds ~ An Etsy Shop