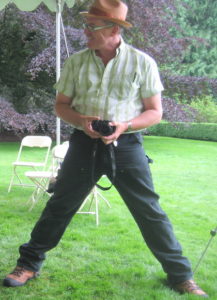 Before the season’s over don’t forget to record the way your garden looks now, so that you can remember what worked well and what didn’t, what empty spots need filling in, and so on.  Plus, you’ll be able to relive your garden next January when it’s covered in snow (assuming we ever have snow again).

Photographing your garden is actually most helpful when it’s done regularly – at least once a month – and when it covers all parts of the garden and includes wide shots as well as close-ups.  If you file the photos away by year and month, you’ll have the pleasure of tracking your garden’s progress, or looking back to discover a particularly effective container combination you forgot you ever did.

If you’d like to take your photos to the next level, I have a few tips for you from noted garden photographer David Perry. I learned them at a free seminar he gave to 65 garden bloggers who gathered in Seattle to tour gardens, network and just have fun.  David, who’s headquartered in the Seattle area, is noted not just for the quality of his shots but for his winning ways on the speaking circuit and in the hearts of middle-aged women everywhere.

So under a tent at the Bloedel Reserve (which is ridiculously beautiful – here’s just a taste), David gave us some great tips: