Behnke Nurseries is located in Prince George’s County, Maryland.  To reduce stream pollution and pollution entering the Chesapeake Bay, Prince George’s is actively working to reduce runoff during storms.  [Among other things, heavy runoff may overwhelm sewage treatment systems.  This is discussed previously here and here.]  Surrounding counties in Maryland have similar programs, each with a different name.  Ours is called the Raincheck Rebate Program.

Behnke’s was selected as a site to install examples of the seven types of projects you can do to earn a rebate.   We have discussed the Rain Garden several times, and are moving on to Rain Barrels and Cisterns.   You can find out all about the program here.

Rain Barrels and Cisterns are waterproof storage containers designed to capture water falling on a roof surface and intercepting it before it runs through the downspout to the ground.  It’s easiest to think of a cistern as a big barrel. 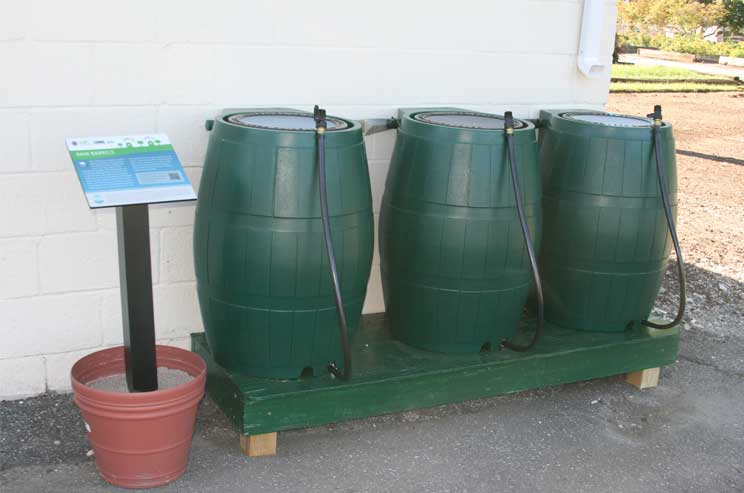 Installing a rain barrel is pretty easy and they are not very expensive.  The rebate is $2 per gallon stored; so a 50 gallon rain barrel should earn a rebate of $100.  The aggregate rebate available through this program is $ 4,000 for homeowners.  Installing a rain barrel or several is an easy way to get a rebate, and should go a long way toward paying for the cost of the barrel.  My understanding is that this particular rebate is pretty easy to process.    You must fill out the application form, of course—in advance—and eventually you will need to provide a receipt, but you shouldn’t need to get anything inspected.

A few things to bear in mind. 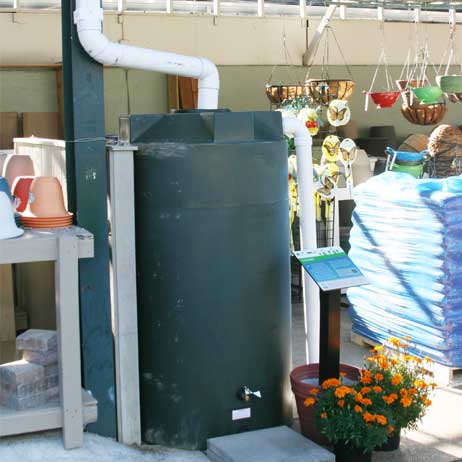 As far as Cisterns go: cisterns are big.  The minimum storage size for a rebate is one that will capture at least 250 gallons.  With the whole “water is heavy thing”, there is a lot more to consider when installing a cistern.  With the weight of the container itself, for example, a water-filled thousand gallon cistern might weight as much as 9,000 pounds.  That is going to require a solid foundation, e.g., concrete.

When my parents built a home on a rather arid piece of ground on the Caribbean island of Montserrat back in 1967, one of the things they added to the house was a concrete cistern (cisterns are now most often made of plastic).  Somewhere along the way, I think the bits about “needs to be screened” got lost; perhaps it was screened and the screen rusted away.  I just recall that at some point they gave up on it and eventually drained and sealed it after it became a weekend spa for tiny tree frogs that would find their way in to lay their eggs, yielding zillions of tiny (yet very loud) offspring.

So if you are thinking about a cistern, carefully consider placement, use the water between rainfalls, and screen out the critters.