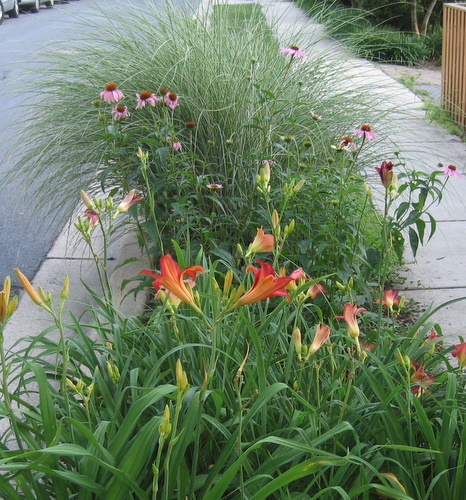 Who SAYS the strip of land between your sidewalk and the street has to be covered with turfgrass? Okay, in some places the government actually says that but most of us have the freedom to plant something a little more interesting – and less resource-intensive, too. Here you see the curb garden or “hell strip” in front of my house (actually my former house, where I actually had a curb).  I made sure the water-meter guy still has access, and also that this little garden doesn’t block the view of drivers. (Safety first!)

I goofed in not knowing (or inquiring about) permission I should have gotten first from my city before planting anything here, so I’m just lucky I was allowed to keep this garden. Which garden my neighbors, I might add, never seem to tire of admiring, and thanking me for. Public gardening sure has its rewards.

Now about the choice of plants.  Curb gardens need tough ones because sites don’t get much tougher than this one. They have to be able to handle the usual stresses of heat and drought PLUS cars, snow plows and salt trucks, kids on bikes, and the regular diggings and droppings of all the dogs on the street. I wasn’t about to spend money here, just to see everything destroyed. So everything here was a cast-off or division from other parts of my garden.

And it’s important to note that this spot can be garden-like, crammed full of plants of different heights, only because there’s no parking on my side of the street. I’ve seen some great curb gardens that DO allow for access to parked cars and I’ll be posting about them soon, right here. 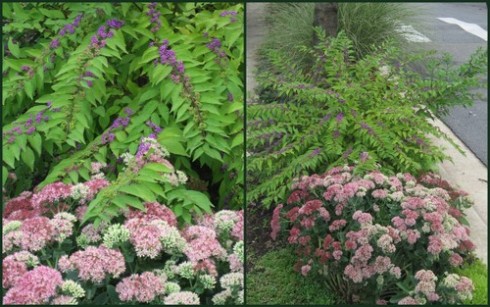 After five years in the ground, the result was:  Absolutely no damage from any of the feared sources, and a pretty garden that’s almost no work. These plants are drought-tolerant, and pretty good at crowding out the weeds. So, a bit of watering, a bit of weeding. Then in late winter I do clean-up – remove dead perennial flowers, hack the grasses back to the ground, and prune the beautybush.

Buffalo, NY
Next stop, a curb garden in Buffalo, New York, the city with the largest garden tour in America. (Every July over 300 gardens are open to the public over two days, all free.   They call it a Garden Walk.) 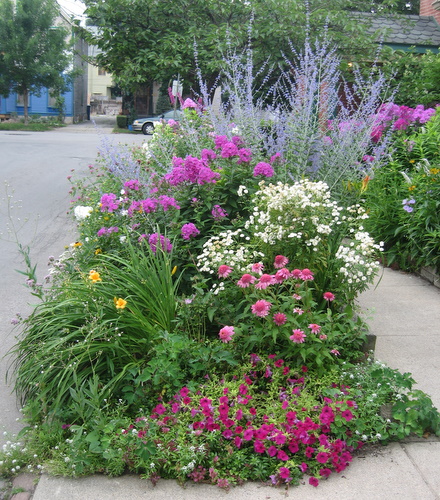 Portland, Oregon
And from the West Coast, below you see a high-impact garden packed in between the street and the unseen sidewalk. 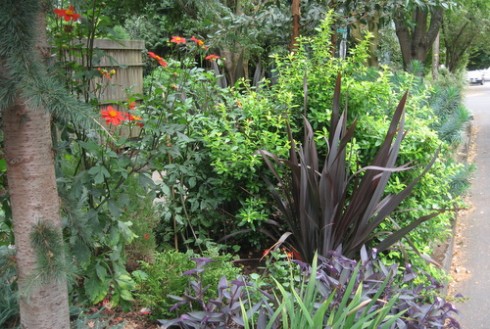 Inspired yet? One New York Times writer was inspired to do something creative in his Minneapolis hell strip, and recounts the transition here.