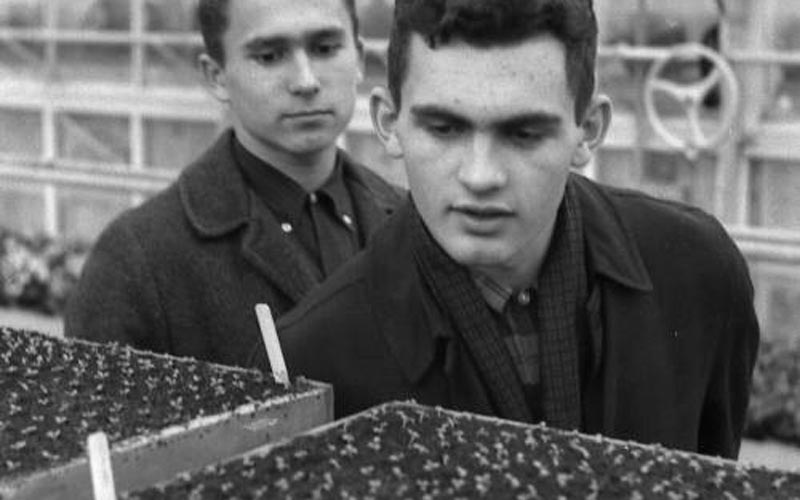 Yesterday at a meeting, a conversation about the “old days” working with my grandparents started. There were comments like, “I remember when…,” and “Do you remember how we…?” Someone brought up the old wooden flats that we used to use for transplanting.  I doubt if many of them were working at the nursery then, but I was.

One of my first jobs as a little girl was planting impatiens and other annuals into these flats. We used a ruler to make sure the rows were straight and a pencil as a transplanting tool. We received our seedlings in one crowded flat in which the seed had been sown, and had to separate them to give them more space. First, the sharp point on the pencil was used to untangle the tiny roots. Then I would carefully hold the seedling by one little leaf while using my other hand to poke a hole into the sterilized potting soil with my pencil. I then quickly put the roots in the hole and cover them with soil so just the top of the seedling would show.

Then, they were left to grow until they produced another set of leaves.  At that point we would transplant them again into two-inch diameter pots, and later into the final pot to sell. A lot of work went into this to provide a strong, sturdy annual for our customers.

Now, growers receive seedlings in what is called a plug tray. Depending on the type of plant, the size of the plugs varies. The seeds are typically planted into those trays by seeding machines. Once up to size, the plants are popped out and planted directly into the container in which they will be sold to you, sometimes by hand and sometimes by a transplanting machine. If it is a hanging basket or other larger pot, 3 to 5 plugs are planted to make a fuller finished container. As with everything, plant production changes as we find quicker, easier ways to get to the finished product. But looking back and talking about the past is always fun.

The above photo, taken by my grandmother Rose Behnke, shows two of the Marcus brothers, who worked for us back in the 60’s, checking out the plants.