This season I’ll be visiting with Greenbelt’s community gardeners every week to report on what they’re doing in the garden and what their gardens are producing that week.   As a newbie to growing edibles myself, I’m hoping to pass on the wisdom of these savvy gardeners to blog readers, while learning a bit myself.

Actually, I expect to learn a lot.  These spaces are gardened by not just regular, knowledgeable gardeners but by experts who work at the nearby Beltsville Agricultural Research Center. It’s also just fun to meet other dirty, sweaty, enthusiastic gardeners like myself in my new hometown of Greenbelt.

Sisters Chris and Liz Kleemeier have been gardening together here for three years, though they profess to still knowing very little.   This week their main tasks are watering (it feels more like July than May, doesn’t it?) and laying down straw to hold down the number of weeds that have to be removed.  (Straw they told me they bought from Behnkes, by the way, being placed around plants from Behnkes.)

In the foreground above are stalks of onion from last year that are too pretty to remove, I’m told.  I agree!

Two of their best-performing plants are rhubarb, on the left, which the gardeners hope to turn into pie, and the thyme blooming on the right, which they bought because they’re perennial and would overwinter, which they certainly did.

A trick that Chris and Liz are trying this year is installing a trellis to hold up their cucumbers.  That way, the cukes will be off the ground, so hopefully less bothered by pests and definitely easier to pick. 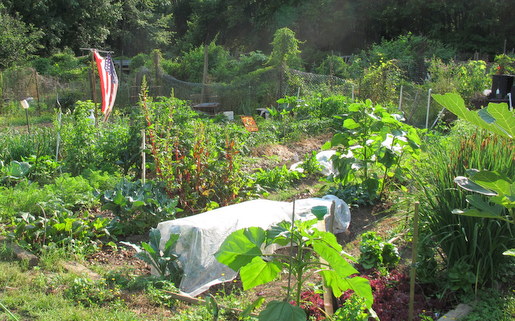 One gardener flies the flag for Memorial Day. 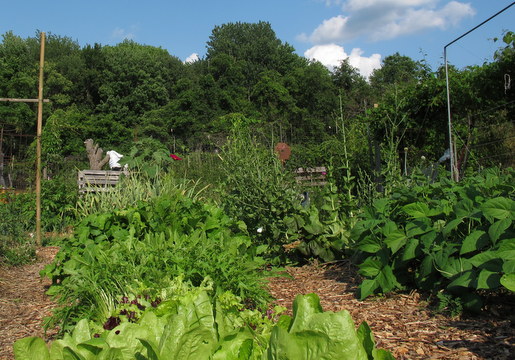 Above and below, the plot of Jude Maul is already fully mulched, but needs lots of water.  Also on Jude’s list of tasks this weekend was harvesting as much of this gorgeous lettuce as possible before it bolts in the early heat.

Above are two more robust growers in Jude’s garden.  On the left is a row of asparagus, now in its fourth year and ready to seriously produce this year – finally!  And on the right are the snap peas that Jude was snapping off from the vine and popping into his mouth when I arrived to interview him.

Elsewhere in the garden I noticed some plots just starting to be prepared for the season, like the one below showing some newly plowed rows.   Spying the old-fashioned plow below right, I was impressed with the low-tech authenticity on display – until I noticed the power version on the left.  Use a little gas to spare a middle-aged back?  I’m totally on board with that.

More about the Greenbelt Community Gardens
Information about the gardens (three of them) is nowhere to be found online but I’m told the huge plots go for just 10 bucks a year.  Most are fenced but for some, better fencing is required.  (Pesky critters include not just deer but the far sneakier rabbits, plus the occasional raccoon.  The biggest challenge here – and this is BIG – is the lack of water.

Yes, these dedicated gardeners have to carry in their own water!  Scuttlebutt is that maybe someone will try to do something about having the city provide water for this garden, but then again maybe not.   I assume that’s because most gardeners are happier digging in the dirt than knocking on the doors of government bureaucrats.

Hopefully, I’ll soon be reporting on what’s happening in MY community garden plot here.  I’m told that I’m first on the waiting list and because I’m only looking for a part-share (because the plots here are HUGE), I’m optimistic that I’ll have enough space to grow a few items this season.   So I’ll confess up to another purpose in visiting the garden frequently – to spy any claimed but unused plots that might be up for grabs if I bring their unused condition to the right person’s attention.  I’m sneaky that way.