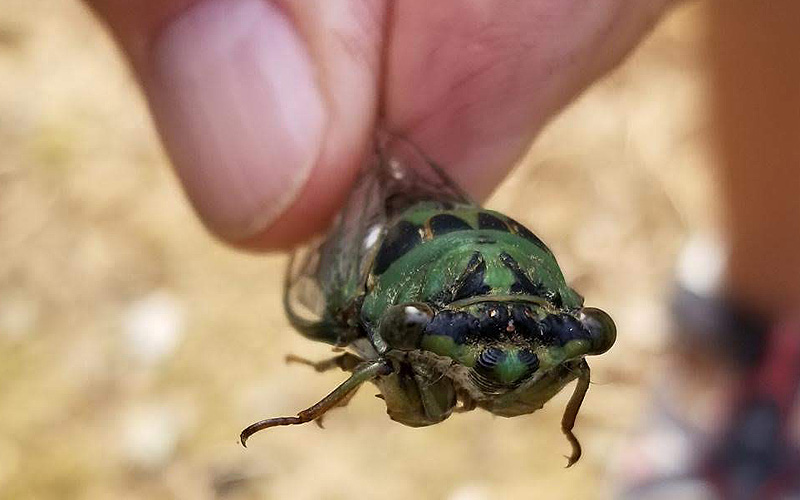 I think one of the best parts of being a grandparent is when the little ones ask questions and actually stop and listen to the answers.  Our grandson Aaron, who just started 1st grade, and little big-girl Zoe who is now two, are famous for asking about everything they see and do. While Zoe will listen for a few minutes, Aaron will listen and then ask even more questions.

This past weekend, when they were leaving to walk home (they live next door!), Aaron came upon this big old bug. “What’s this, Granddad?” as he bent down to check it out a little more closely.  “Why, it’s a cicada,” Granddad told him. The next thing we knew Aaron had carefully picked up said large bug (which I personally would never have picked up), and was showing it to his sister and mother.  I had to laugh when he asked if they bite, since he was already holding it.  Granddad told him about these creatures and also told him about the smaller ones with the red eyes that come out every 17 years.  This one was one of the more common ones called “dog day cicadas.” 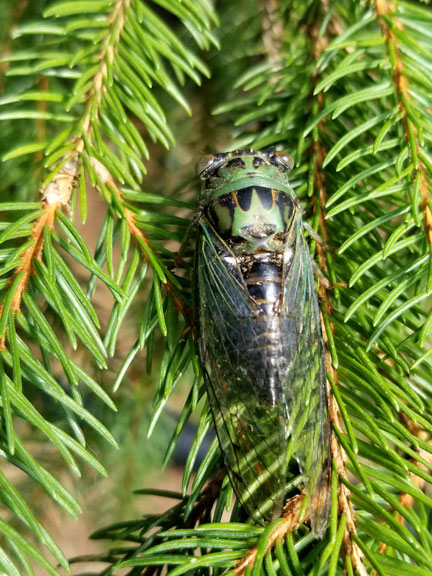 Granddad sort of winged it (so to speak) but we learned that the dog day cicadas emerge from the ground in late summer and the boy cicadas buzz until they attract a girl cicada.  After a whirlwind courtship, the female lays eggs in a tree branch. That’s pretty much it for the adults, who don’t have much else to look forward to.   A few weeks later, the eggs hatch and the babies drop to the ground, burrow in, and spend two to five years sucking sap from tree roots.  They emerge from the ground in late summer, attach to a building or tree trunk, split open, and the adults emerge either as the buzzer or the buzzee.  They are never in great enough numbers to do any real damage.  Eventually the small branch that the eggs were laid in breaks off, but it’s just what granddad calls “natural pruning.”

Once Aaron set the cicada down on the ground we decided it might be better to put it in the tree so no one accidently stepped on it. Zoe at this point was happily running around having forgotten about the BUG!

I love that both our grandchildren enjoy being outside in nature as we take walks together and explore our surroundings.  I remember from my own childhood taking walks in the woods with my grandmother, Rose Behnke, and then when my children were little, my mother Sonja taking them for long hikes around their property.

I hope that Aaron, Zoe, and my future little grandson (due in October) will carry with them the memories of our time together and the lessons learned from their grandparents.

Bagworms – The Nightmare Before Christmas

How to Identify and Target Insect Pests