For some of us, trees take up too much space, and that’s fine – there are plenty of fantastic shrubs and vines the provide fall leaf color. Many are native and have added benefit to wildlife and are easy-care. I love mixing them with each other and with perennials to create a dazzling medley of hues, but you can also use only a few species en masse to make a greater impact of only one or two colors. I prefer my fall colors in a glorious mix of every shade possible, but I’m one of those eclectic gardeners who likes a little bit of everything. Many of these plants also have some unpalatability to deer, but keep in mind that nothing is deer-proof. The more diverse your plantings, though, the less likely that they will all get affected the same should stress befall them (like having their leaves munched). 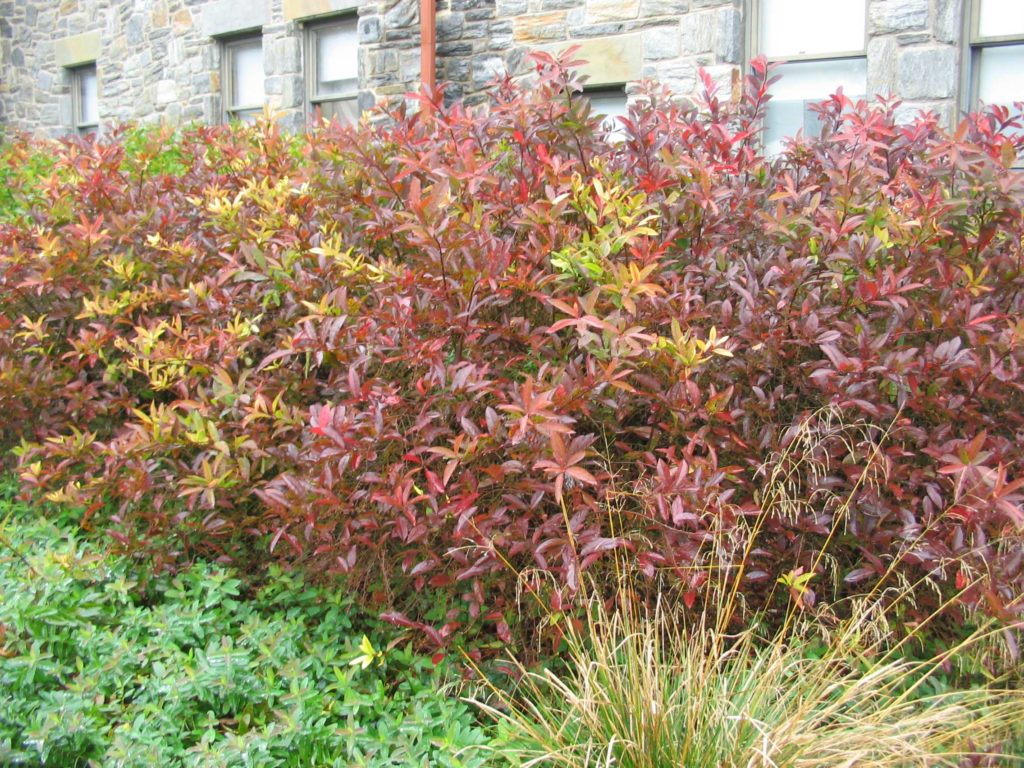 Virginia Sweetspire
Thankfully this shrub is not limited to Virginia, because it’s one of my favorite for reliable fall color. I see them amongst the rocks on the trails at Great Falls regularly, where they are often deep burgundy in autumn. Garden varieties can vary in color, but the popular selection ‘Henry’s Garnet’ tends towards the dark red end of the spectrum where the shorter ‘Little Henry’ is a brighter mix of scarlet, orange and gold. They may even hold on to some red foliage in a mild winter, during which their young stems are a dark red. Spring flowers attract pollinators and a suckering habit makes for a great stabilizer of loose soil. I think they look best when paired with cool hues, such as a blue-green or grayish juniper, silvery Artemisia or a purple-flowered Aster. 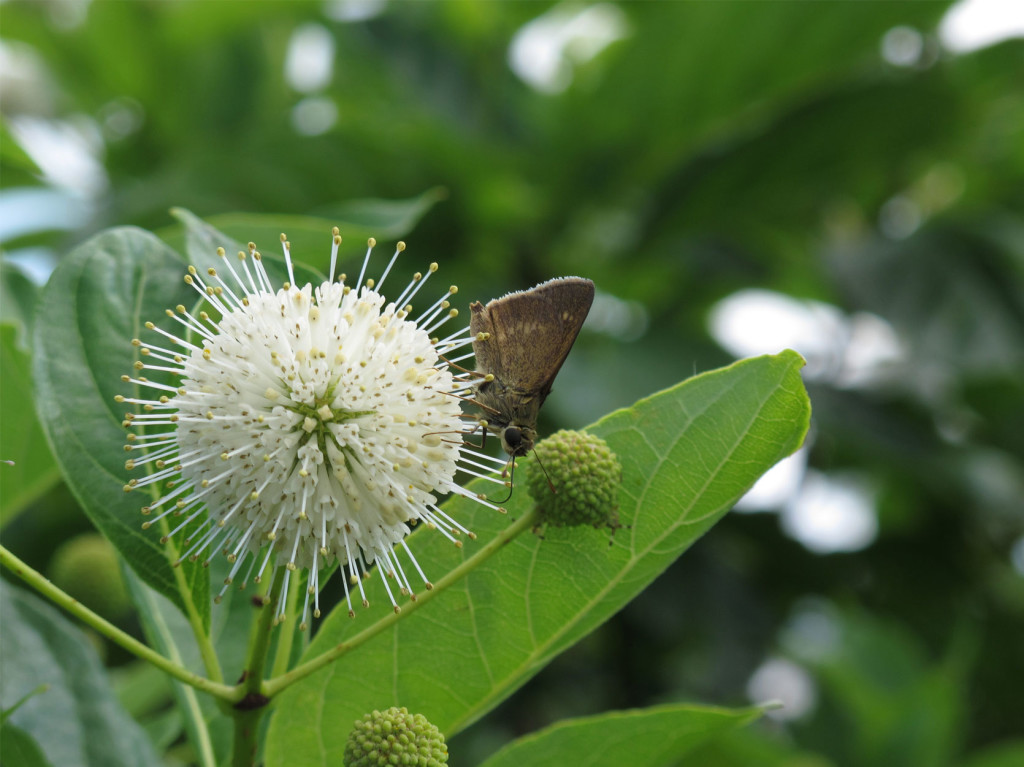 Buttonbush
Ok, so these shrubs are not normally known for their fall color, but I include them here because they can surprise you. Hiking last fall at Great Falls, I came across several plants in the wetter pockets between the rocks that were a stunning mix of yellow and dark red. Buttonbush are very tolerant of wet soil and would be perfectly happy sitting on the shore of a pond or sunny creek. Butterflies and other pollinators appreciate them too, and since they bloom later in summer, you can prune back all the bare stems in winter to tidy them up with no loss of flowers.

Redosier Dogwood
I touched on these plants when I mentioned their relatives, the Flowering Dogwood, but they deserve their own space. A shrubby species, they bear little resemblance in flower to our familiar trees, but boast the same spectacular fall color and additional seasonal highlights – red to sunset-orange (or yellow) winter stems and porcelain-white berries for the birds. They have better tolerance for wet soils than their tree cousins, too, and look best paired with something evergreen that can show off their winter colors once the leaves fall. I like harvesting a few colorful stems in winter for holiday décor, like in mixed evergreen swags or stuck into centerpieces – besides, the occasional pruning keeps them growing new stems, which adds to the color each year. 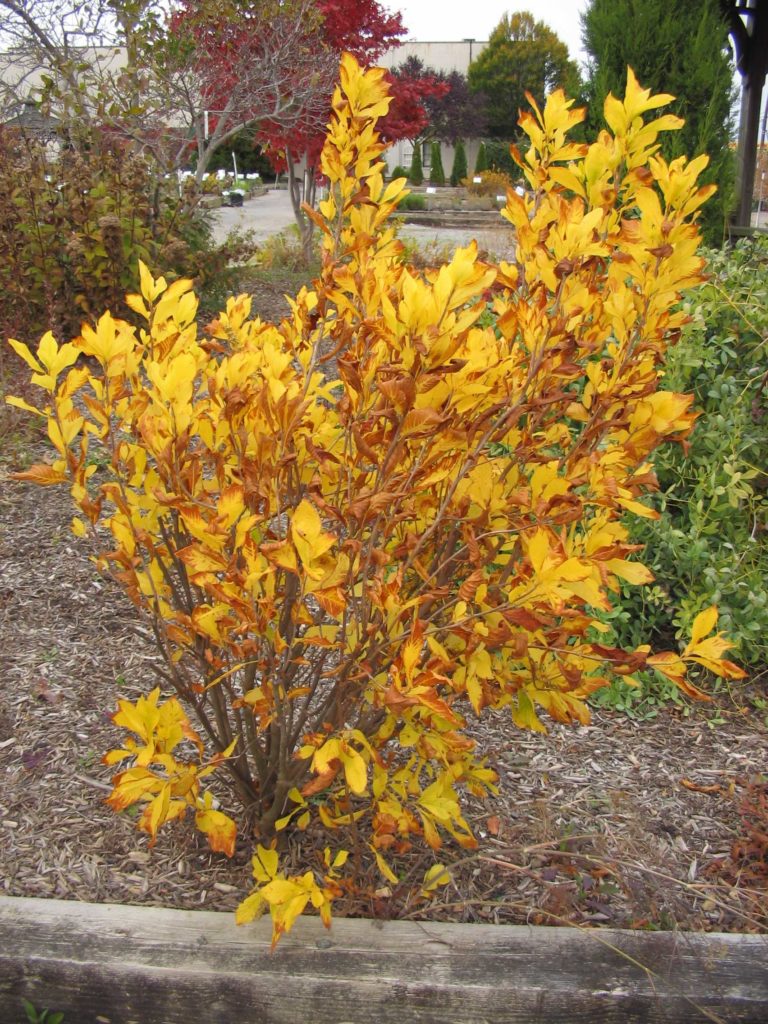 Summersweet
Most of the “ooohs” and “ahhs” of fall leaf-peeping come from the reds and oranges, but yellow-gold deserves a nod too. Summersweets deliver with golden yellow before they go bare, and as a suckering plant, you can have a nice bank of them displaying a mass of color at once. Fragrant summer flowers are a huge draw for pollinators (and people who like sweet scents) and they make great bank stabilizers and rain garden denizens. From what I’ve seen in the wild, they can take both sandy soil in the coastal plain woods and moist ditches on the edges of the piedmont forest, so they can take varying amounts of sun and moisture. Plus, if you get one of the late-blooming varieties, you may even have flowers still going strong into early September. 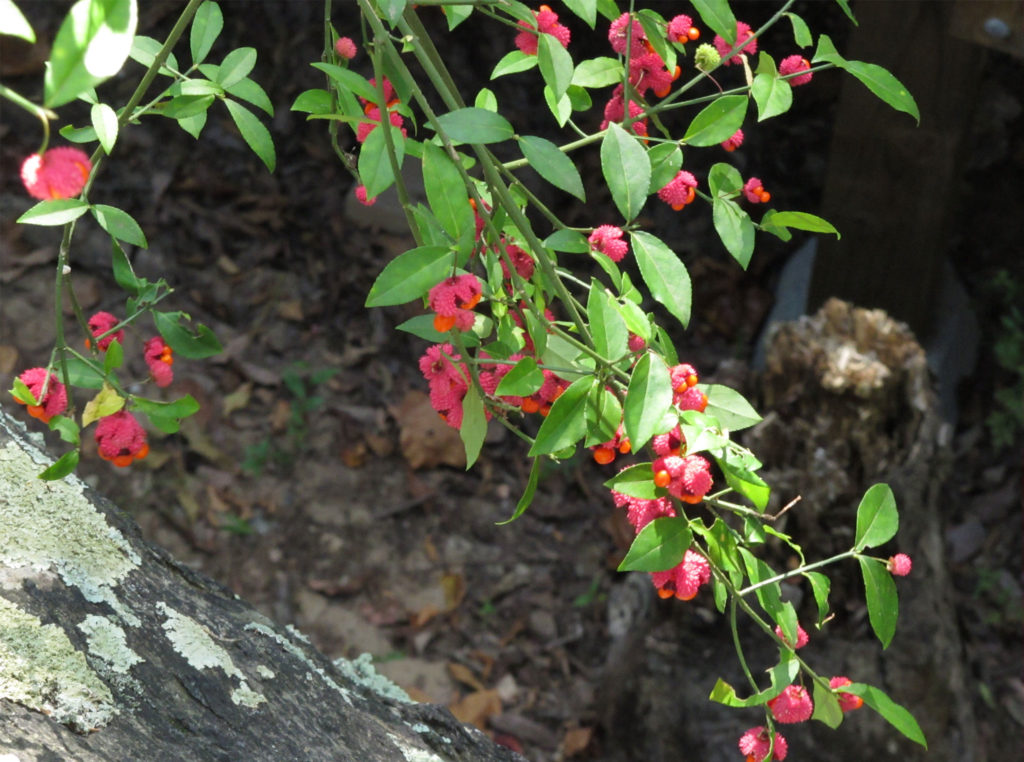 American Euonymus / Strawberry-bush
At first glance, this underused native has little in common with regard to appearance to the commonplace Asian cousins – they’re not reliably evergreen, but neither do they turn brilliant red. Their point of interest, then, is their fall ripening of seed – bright pink bumpy capsules that pop open to dangle bright orange berries. The fruit pulp is a bit oily and as such are appreciated by birds desiring to increase their caloric intake prior to winter. Unfortunately, deer do enjoy this Euonymus about as much as they do the Asian types, so site them in a protected spot. They don’t grow terribly dense, so you can see through them to other garden highlights and views, making them nice accents in a mixed planting. Woodland denizens, they would live happily with ferns, woodland Asters and other members of the Eastern deciduous forest community. 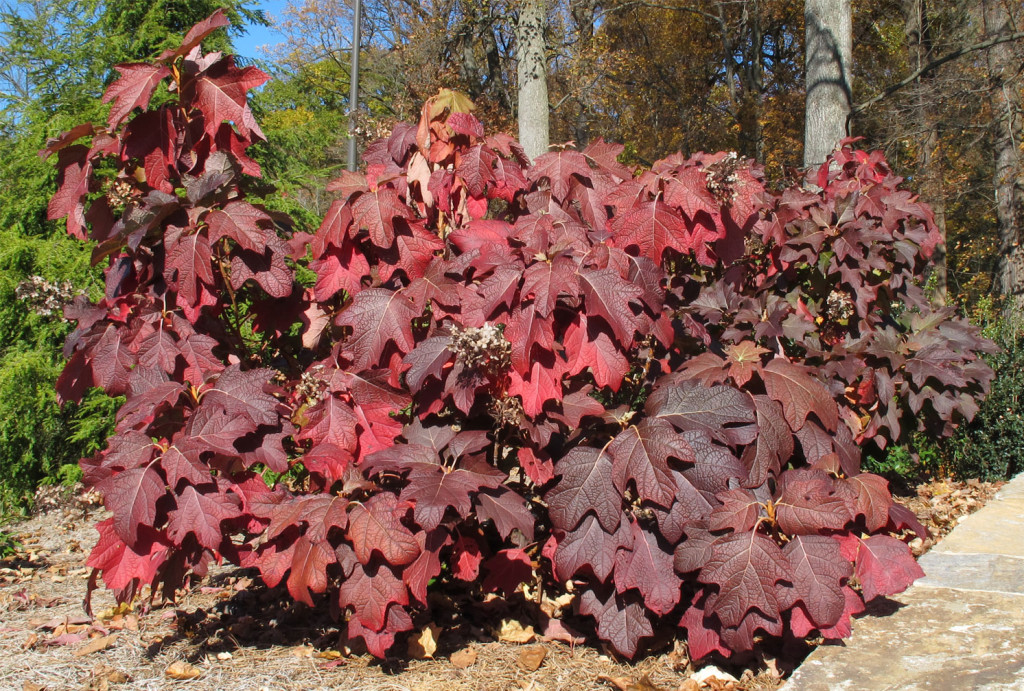 Oakleaf Hydrangea
These southeastern natives deserve their own article but, in the meantime, I would be remiss in not mentioning them. Leaves that resemble textured oak leaves turn shades of yellow, golden-caramel, russet-red, maroon and/or rosy-purple. Flowers that haven’t been trimmed off will be a cinnamon-brown, and later in winter, older bare stems will have peeling bark. There are so many varieties available now that you have some choice as to how tall they grow, and plants are flexible enough that full sun to modest shade are tolerated, though half-and-half is best. I like them planted behind short asters where you get a nice contrast of reds and blues/purples, but golden perennial sunflowers or goldenrod would also be a nice complement. 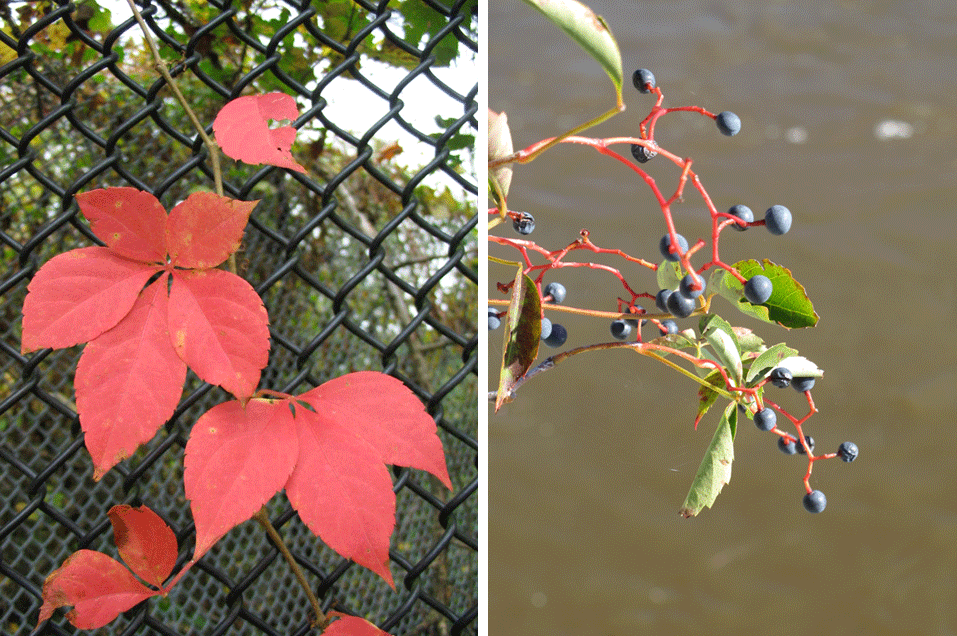 Virginia Creeper & Silvervein Creeper
Virginia Creeper is so common it may be considered a weed, but being native and attractive most of the year, I give it a pass. Besides, compared to other vines, it’s very easy to control and birds enjoy the dark blue berries, which I find to be a nice color addition to their fall foliage anyway. Leaves are usually red, though I have heard of a new variety that consistently turns yellow. They cling to supports with little sticky pads (think treefrog feet) and don’t strangle the trees they climb, unlike English Ivy. They are cousins to Boston Ivy, and their other relative from across the pond is Silvervein Creeper, which looks much the same save for a delicate paint-brushed line of silver down each leaflet. Full sun is ok but part shade is best, and they’re not terribly picky or problematic. Like most vines, if you don’t give them anything to climb, both will be a great groundcover. 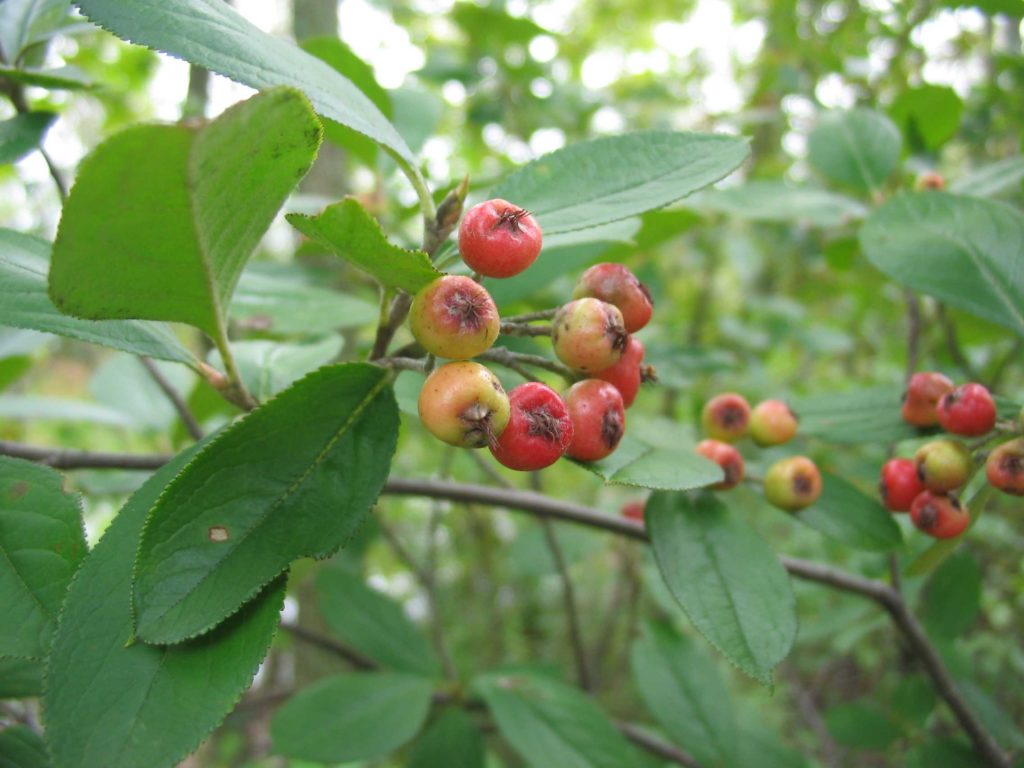 Chokeberry
An unfortunate name for a useful native; besides their red and black berries that draw birds (though not as quickly as other fruits), their suckering habit stabilizes soil and their tolerances for both wet and dry soils make them great rain garden inhabitants and suitable for tough garden spots. Fall foliage is the main draw, with shades of red, scarlet and maroon. Red Chokeberry can get a bit tall, so use it behind other shrubs or perennials for best effect; Black Chokeberry tends to be a bit more compact. 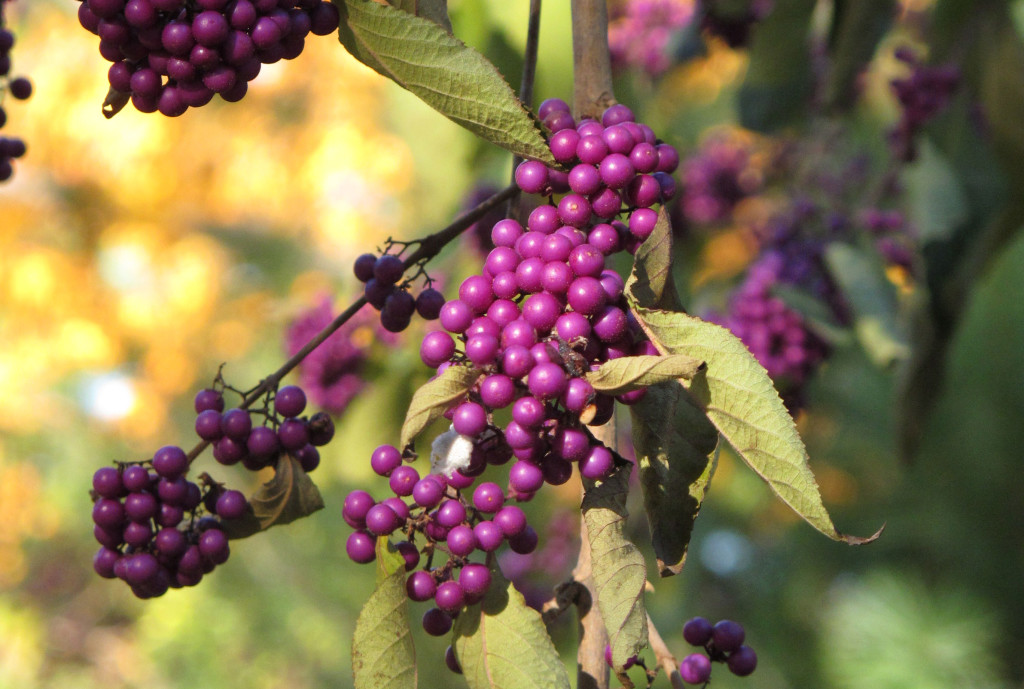 Purple Beautyberry
I can’t think of any other hardy shrub with berries of this color…an unreal shade of violet-purple. (There’s a fun white variant, too.) There’s a native species and several Asian ones, all of which are quite similar, though a few of the Asian types have variegated options that are quite attractive. They start ripening in late summer and stick around through fall until the birds succumb to their temptation during winter. Leaves usually drop yellow, but they can sometimes turn purplish instead, and you can prune the whole batch of stems back in early spring if you want it to start fresh for the year (no berries will be lost). If you want harmonious accents with the purple, combine them with purple Asters or Eupatorium in blue or mauve; give them a dark evergreen backdrop to really make them stand out once the leaves have fallen. 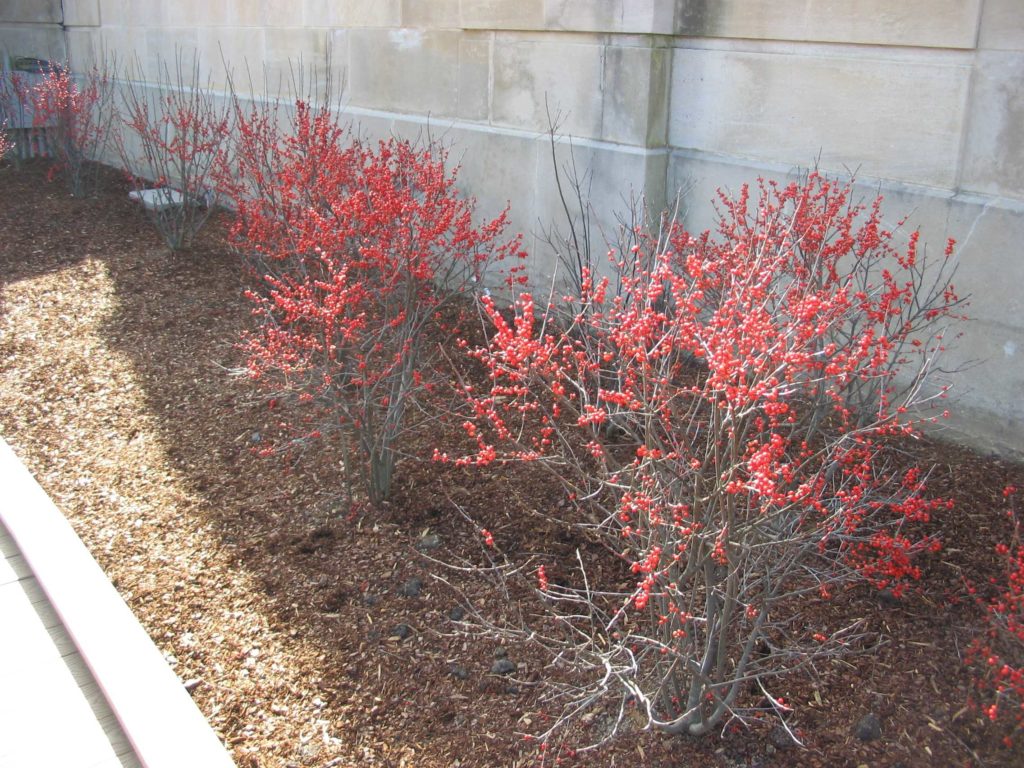 Winterberry Holly
A holly that drops its leaves in winter may be unusual, but these plants make up for it by adorning their branches all fall and winter with bright berries. Most are red, but there are rarer orange or yellow forms; as with many hollies, only female plants fruit, so be sure you get the best male pollinator to go with the ladies. Medium-height to tall shrubs, they too are best planted in the background where shorter companions can still be seen and appreciated. Despite being left alone for much of winter, they are still useful in the wildlife garden for birds, and they are equally at home in rain gardens and water-draining areas. Native to our eastern woodlands, they set a surprising amount of fruit even in mostly shade, though full sun is acceptable and will promote the best fruit set. Cut branches can be used (if kept out of water, not in a vase) during holiday decorations in evergreen wreaths, swags and centerpieces.