Late blooming perennials are a treat to the eye and a treat to pollinators, which find fewer sources of nectar and pollen as summer fades to autumn.   Here are several perennials that will perk up your September/October gardens.  As we get into September we will have a better selection of the below as our fall deliveries arrive. 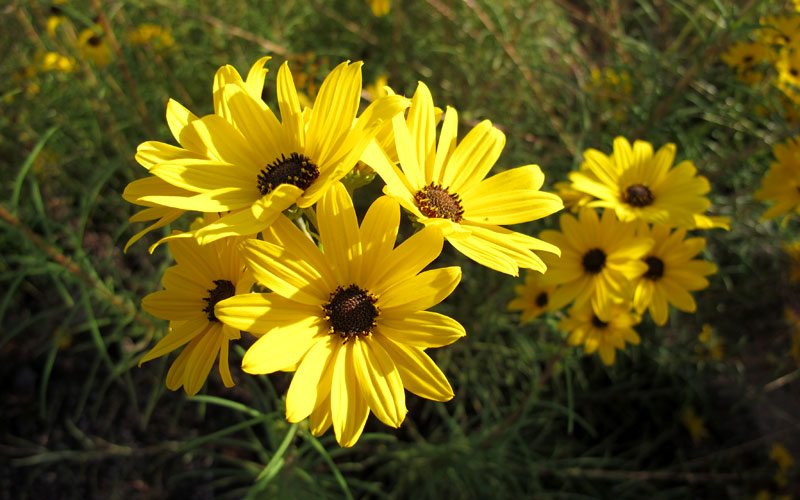 Willow-leaved Sunflower: Helianthus salicifolius
An American native sunflower that bear golden daisy flowers in mid-to-late September into October.  The rest of the season it has narrow, shiny green leaves and great potential as it waits patiently for autumn.  The wild form is rambunctious, getting up to ten feet tall and spreading by rhizomes (underground stems).  This is not a bad thing unless you have limited space (like most folks).  There are several attractive dwarf forms that put this plant into better perspective.

When in bloom, the plants are covered with flowers.  These selections make a tight clump that slowly spreads over the years.  After several years you may divide it to spread it around to other spots or to reinvigorate the clump as the center starts to thin out as the clump grows outward at the margins.  (That is, in spring, dig out chunks of the younger vigorous growth and throw away the older growth in the center.)

Deer resistant.  Full sun is best, established plants will tolerate some drought but they prefer to be watered in dry spells in the summer. 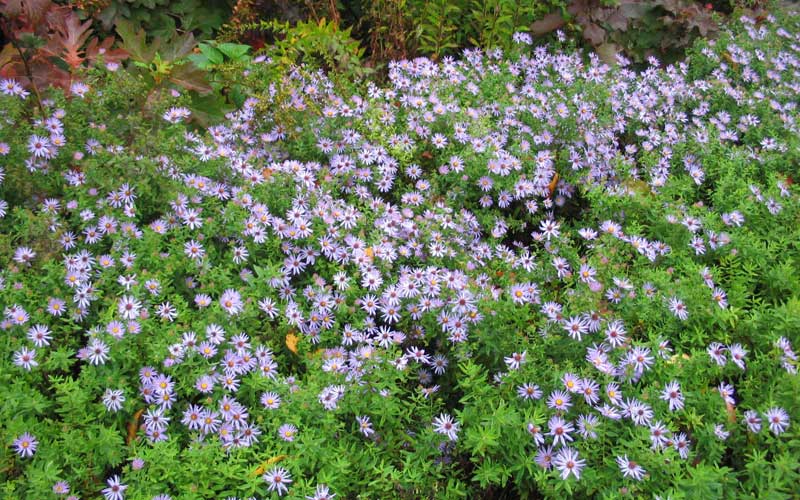 Aromatic Aster: Symphyiotrichum oblongifolium (the Aster formerly known as Aster oblongifolius)
Also blooming in October, their blue flowers make a nice contrast to the sunflowers above.  This plant has bad posture (or, let’s say an informal growth habit), sprawling into a circular clump about three feet high and as far across.  The late bloom makes it a magnet for late-season butterflies.

Full sun is preferred, and they require soil with good drainage.  They tolerate drying out once established.  The “aromatic” part refers to the foliage, which is said to have a “balsam-like scent” when crushed.  This is not a big selling point, except that it increases the odds of deer resistance.  We were intrigued by this description and went out to the garden and cut a piece and passed it around.  We noted a faint piney scent overlaid with a heavier “green” scent.  The fragrance is probably stronger in years where the plant is under more stress from lack of water.

The two common cultivars are ‘October Skies’ and ‘Raydon’s Favorite’.  ‘October Skies’ is shorter and a more compact grower, with deeper blue flowers.  They get about 1.5 feet high and 2.5 feet in diameter in our pollinator garden here at Behnke’s. 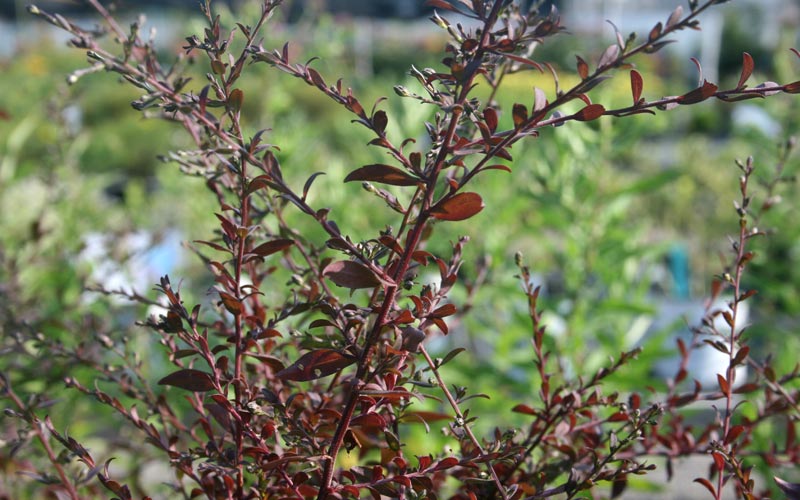 Calico Aster: Symphyotricum lateriflorum (the Aster formerly known as Aster lateriflorus)
Old dog/news tricks.  Although the poor asters were reclassified a number of years ago now, many booted out of Aster to new names like Symphyotrichum, we mostly still use the older names because it’s, you know, easier, even though less accurate.  Paraphrasing Doctor McCoy on Star Trek: “Damn it Jim, I’m a gardener, not a taxonomist!”

Calico Aster is just the total opposite of the Fragrant Aster.  It’s tall and upright, perhaps even willowy, achieving 2 to 3 feet.  The generally available cultivar is ‘Lady in Black,’ which has attractive purplish leaves and small pink-tinted white flowers.  Butterflies are attracted to these asters like paparazzi to a Kardashian, only more polite.

Tolerant of some afternoon shade, grow Calico Aster in full sun to really bring out the purple leaves; however, in the hottest part of summer, the color may fade a bit until it cools off again.   They do best in soil that is watered during dry spells.

Our friends at North Creek Nurseries, a fine producer of starter perennials for wholesale perennial growers, recommend: “Pinching is not necessary to control habit, but a June cut back to 4-6″ results in a shorter plant and more flowers in autumn.”