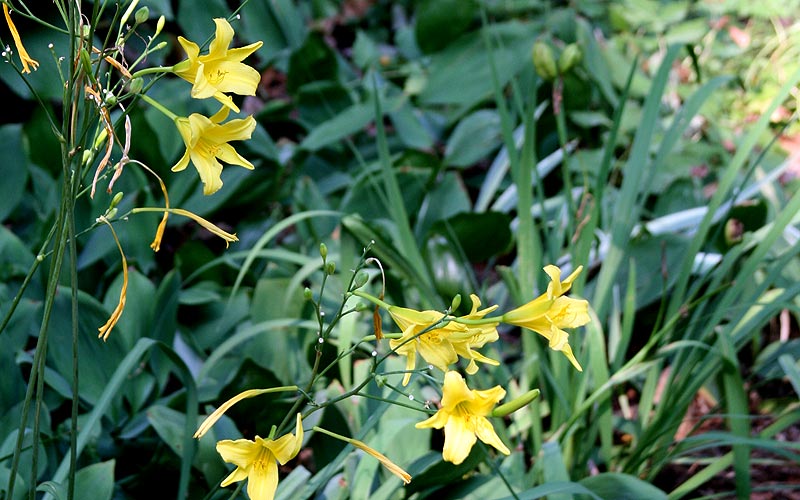 Fall-blooming Daylilies: we don’t have much demand for daylilies this time of the year, and the number of cultivars available to us is limited.  That is ironic, as there are 89,000 cultivars of daylilies out there.  That is, 89,000 different daylilies that people thought were special enough to name and register with the American Hemerocallis Society.  [Note: many of them were wrong in that assumption.]  But, there are only a few daylily growers that produce daylilies intended for resale to wholesale growers that produce potted daylilies for garden centers.  There are, however, a lot of folks that sell daylilies directly to the public via “mail order.”

The daylilies we carry synch with our biggest demand, which is in early to mid-summer.  There are nice late-blooming daylilies though, that you could find from a mail order supplier.  One that I have is an old-fashioned, tall yellow called ‘Autumn Prince’ that has been blooming away in partial shade for several weeks now (that is, late August into early September).  If you want to extend color in your garden, you might consider late blooming daylilies. I’m sure there are hundreds of cultivars out there. 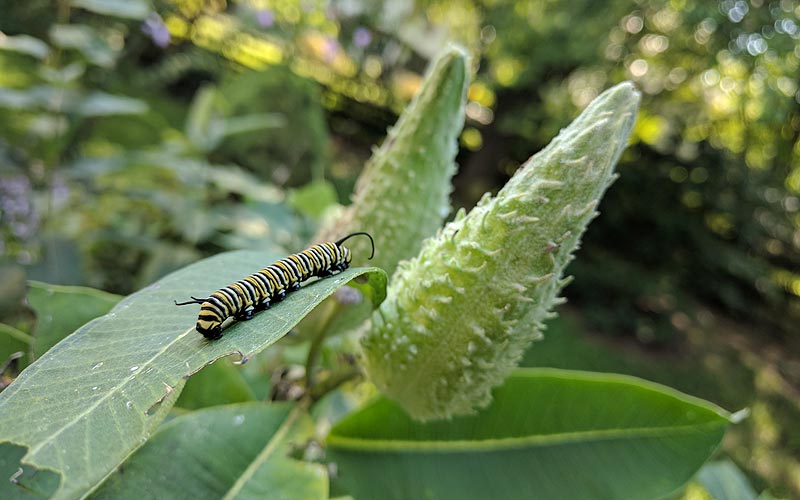 Milkweed: there are several Asclepias species that grow in our area, two of which we sell.  We don’t routinely carry Asclepias syriacus, which is the one that I think of when someone says “milkweed.”  We have several patches of it growing at the nursery, probably seeded in from the railroad right of way across the street.  A couple of days ago I watched a monarch butterfly laying eggs on them, and we have several monarch caterpillars chowing down on it at the moment.  It’s a great food source for the monarchs because it’s so vigorous: it provides a lot of leaves to munch on.

There are several reasons we don’t carry it.  When we tried to grow it in pots back a number of years ago, we had very high losses.  It didn’t seem to like our soil, or our watering regimen, or much of anything else about us.  So we found it hard to grow. It may be that other growers have the same issues. If it is happy in your garden, it grows very vigorously, running like bamboo: so it’s definitely a garden thug.  While the flower heads are pretty (balls of pale pink waxy flowers), and fragrant, [for the couple of weeks that they are in bloom], the plant itself is the picture of ugly, especially from mid-late summer on. It is usually full of aphids and other insects (besides the monarch, which has a good press agent). Ours tend to fall over, and in general, they just look beat-up, chewed up, and forlorn.

If you have a lot of room and you want to try it, the seed is ripening now in big pods, you should be able to collect it from roadside plants out in the country.  Sow it this fall and see what happens. If you are successful, just don’t say I didn’t warn you.  Or, you might be able to pick it up at one of the native plant seminars/plant sales that are held during late spring and summer in our area. 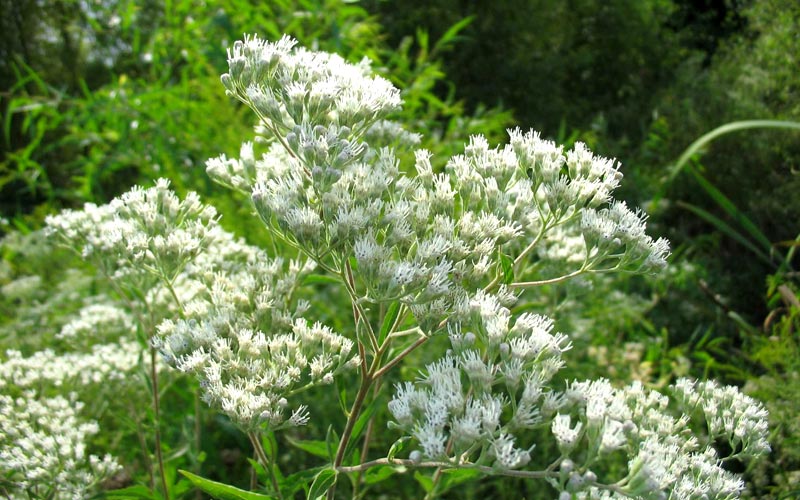 Eupatorium hyssopifolium: Hyssop-leaved Thoroughwort.  This native is a relative of Joe Pye Weed, and we occasionally have it for sale.  It’s another plant that pops up here in the garden beds, probably from seed blown over from the railroad right of way.  I have a couple of plants at home that are also volunteers.  Like the milkweed, it’s a common plant along highway rights of way.

It’s in full bloom now, with white flowers.  Not real showy but not bad. The one outside the door here is six feet tall, and like Joe Pye weed, it’s popular with the pollinators.  Yesterday, every time I passed it there were a couple of monarchs stopping by for nectar.  It needs good drainage, ironically it appears in our rain garden because the soil drains so quickly after rainfall.  We’ll bring it in for sale next spring if we find it available, otherwise, it’s another one you should be able to pick up at a native plant seminar and sale. 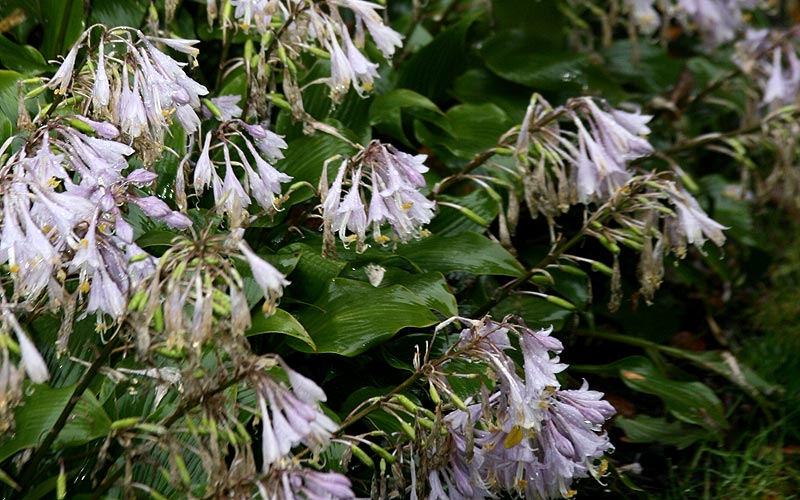 Last: Late-blooming Hostas.  There are many cultivars of hosta that actually have nice blooms, like the old reliable white-flowered ‘Royal Standard’ which is blooming in my garden now, and which we routinely carry earlier in the year as part of our extensive selection of hostas. [best availability of hostas is mid-April to mid-summer].

There is a very late blooming species, Hosta tardiflora, the genes of which have been incorporated into various cultivars. I have a plant of H. tardiflora in my garden, and it’s in full bloom in October, with dense clusters of blue flowers. For that time of year in a shade garden it’s pretty showy.  You can also look for late blooming hostas from specialist mail-order growers.