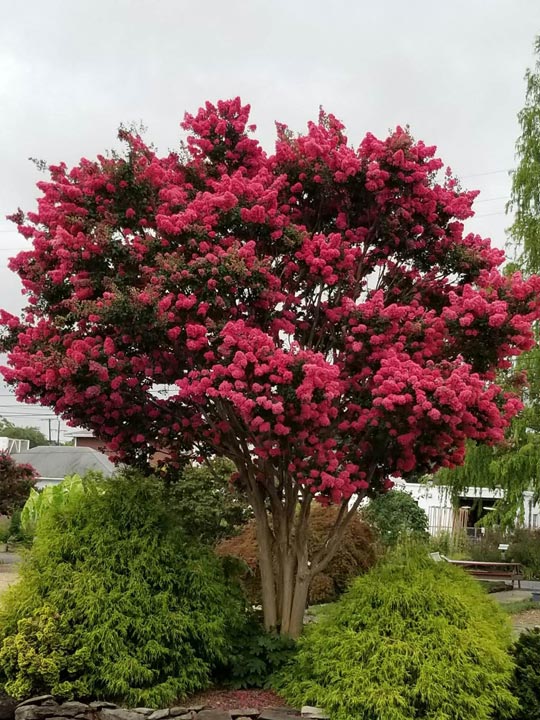 If you have been shopping at Behnke’s for a long time, chances are you might recall that in the past we stocked all of our trees on what we call the “South Side.” This is the area south of our driveway (toward College Park) that is now home to some great display gardens.  John Reed (the guy with the big cowboy hat) used to work in this area.  There are still some wonderful specimens of different trees and shrubs planted there, and John and others use them to show customers what to expect with their own purchases.

Yesterday, I went over to the South Side and while I was admiring the beautiful pink crape myrtle by our driveway, John Reed told me all about it. I have been thinking of getting one for my own home and each year I just love this one.

It is a ‘Tuscarora’ Crape Myrtle, planted 18 years ago in a small display garden next to what is now the Bonsai Classroom. John told me that they wanted a garden, but problematically, it was all blacktop there.  They built a raised bed on the asphalt, added potting soil to a depth of 1.5 feet and took the chance to plant the crape myrtle along with a Peegee Hydrangea and some Hinoki Cypress. Then it became an ongoing project.

Because plants grow, when picking any type of shrub or tree, you should think about how tall and wide you ultimately want it to be. They picked this particular crape myrtle because of the eventual size and nice upright shape.  If you, like John, want a certain shape to your plant then you need to do some work for a few years to achieve the outcome you want.  First, don’t cut it back hard in the fall to the main trunks every year, but instead allow it to achieve its natural height and form.

To get the best performance out of this display plant, John would come out with a ladder several times a year to prune and shape.  As the first flush of blooms began to fade in late summer, he pruned a few inches below the clusters of seedheads to remove them.  If you do this early enough, you will often get a second bloom.  (John says that in a mild fall you could even do this one more time and possibly get a third round of blooms, although you run the risk of freeze damage to the late shoots.)  In late fall (after frost) he would prune again to prepare for winter, removing the remaining seed heads and any weak branches that might be a problem in snow.  In late spring as new growth began, he removed any dead branches, suckers, and surplus growth and pruned to shape as needed.  Since crape myrtles bloom on new growth, you can prune in the spring and still have flowers the same year.

When I think of this 20 foot tall tree growing in just one to two feet of soil, I’m amazed that it never fell down. I think John is a little amazed too. But it goes to show that with the love and attention, anything can happen. Now, I’m not saying that you should go out and plant your own tree on blacktop, I just wanted to share a little of the history of one of the beauties of Behnke’s. If you happen to see John, ask him about any of the other wonderful trees and bushes around the nursery. I guarantee you that if he did not actually plant it, he knows when it was done and can tell you all about it. John loves to share his passion for these trees.

Editor’s Note: ‘Tuscarora’ is one of many cultivars of crape myrtle that were introduced from a breeding program at the United States National Arboretum in Washington, D.C., back in the 1970’s and 1980’s.  The program, which was overseen by the late Dr. Don Egolf was focused on developing crape myrtles that were more resistant to powdery mildew fungus, which can disfigure the leaves and flowers.  Many of the cultivars in the series were named in honor of American Indian tribes; e.g., ‘Hopi’, ‘Cheyenne’ and ‘Chickasaw.’ Since that time other plant breeders have continued to release new selections of crape myrtles, giving us an outstanding selection of plants for long summer bloom.