One of the clichés of horticulture is that a weed is a plant growing in the wrong place. Perhaps you’ve grown some perennials that freely self-sow all over your garden (Lychnis/Maltese cross, Asters, Great Blue Lobelia, Panicum grass, for example) or spread from their intended space by rhizomes (underground stems) like Oenothera speciosa/white evening primrose, Monarda/beebalm, or pretty much anything named “mint.” 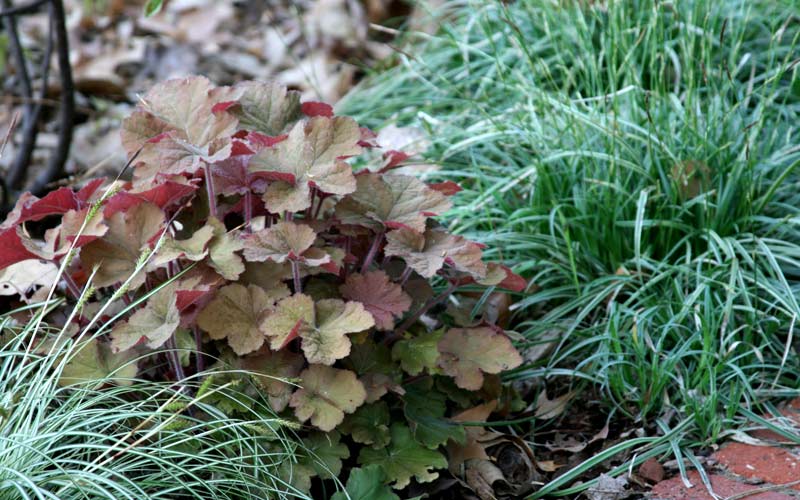 I find Heuchera (Coral Bells) to be challenging to grow; generally having a lifespan ranging from about a week after I bought it to several years.  But like Charlie Brown trying to kick the football, I keep trying because they are just so cool.  Good drainage is essential, just the right amount of sun and shade. I’ve done best in a raised planter that defines one edge of my carport, with a Heuchera ‘Caramel’ that is about ten years old, and a Heuchera ‘Stainless Steel’ that is at least five years old. We won’t talk about the other thirty or so.

Most of the heuchera on the market are hybrids of several species, often including Heuchera villosa in the parentage, which is native to rocky woodland slopes in the southeastern US.  We find the hybrids that include villosa to be better for our area because they bring heat and humidity tolerance to the mix.

Heuchera villosa (with the catchy name of “hairy alum root”) has light green, fuzzy leaves, and white flowers in the fall.  There is a named clone called ‘Autumn Bride’ with a better flower display than the average villosa. 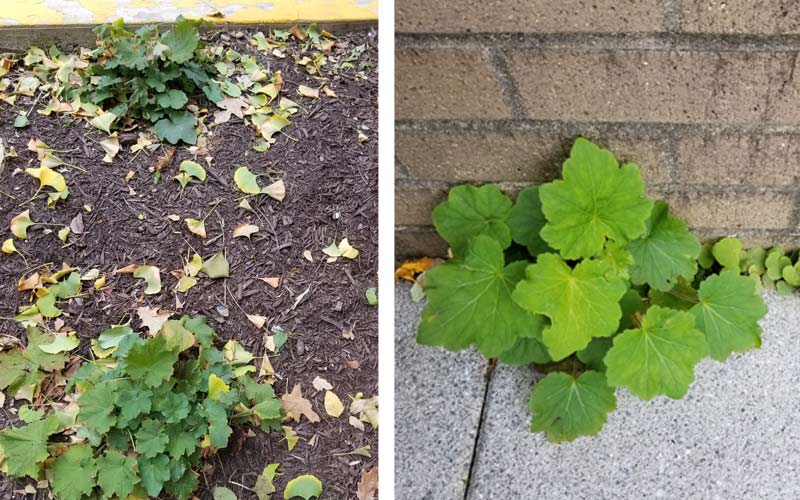 So, about five years ago a commercial planting went in around a parking garage in Rockville, and they installed Heuchera villosa ‘Autumn Bride,’ the idea (I surmise) was that it would become a nice, native-plant ground cover on a narrow sloped area between sidewalk and driveway.  Many of them died, leaving a mostly mulched bed with a few heuchera.  But darned if they haven’t seeded out and are coming up in cracks along the edge of the building and the sidewalk.

You can just hear Mother Nature laughing off in the distance.