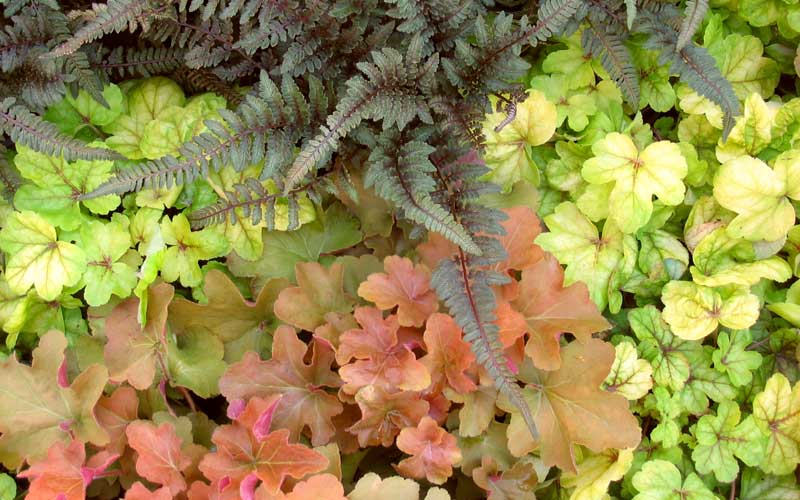 Horticulturists and landscape designers like to use plants that have multiple “seasons of interest.”  An example would be crape myrtles, which have long-lasting flowers in summer, attractive fall color ranging from golden to red, and on the larger specimens, exfoliating bark of contrasting gray and cinnamon.  (For spring you have either the bark of winter or an ugly mass of twigs, since they leaf out late…but three out of four is pretty good.)

We know you are going to do most of your shopping for new plants in spring, which tends to give you a landscape that is strong on spring- and early-summer blooming perennials/trees/shrubs, or summer-blooming annuals. (We know this because on a nice November day, we sometimes wonder if we forgot to open the gate at the driveway–it’s so tranquil here vs. the chaos on a nice day in spring.)  But you should be thinking of multi-season interest for your plantings, even if it‘s just to prepare for your spring forays to the garden center.

The easiest thing to do is take a few photos of something you like, and we’ll do our best to identify it for you if you don’t know what it is.  Send it to behnkes@behnkes.com, or bring it into the store. (We’ll try to find a spot that’s dark enough where we can all actually see the screen.)  Take several photos—a general shot and a close up of the leaves and flowers if it’s in bloom.  Note to yourself whether it’s growing in sun or shade.  Think about where it might look nice in your yard, and once we identify it, we’ll tell you where it will grow best and when the best time is to buy it.

Today is a nice sunny, warm Halloween Day, and I strolled around the garden center looking at plants in the gardens and in pots and jotted down a few things.  Here are some thoughts. 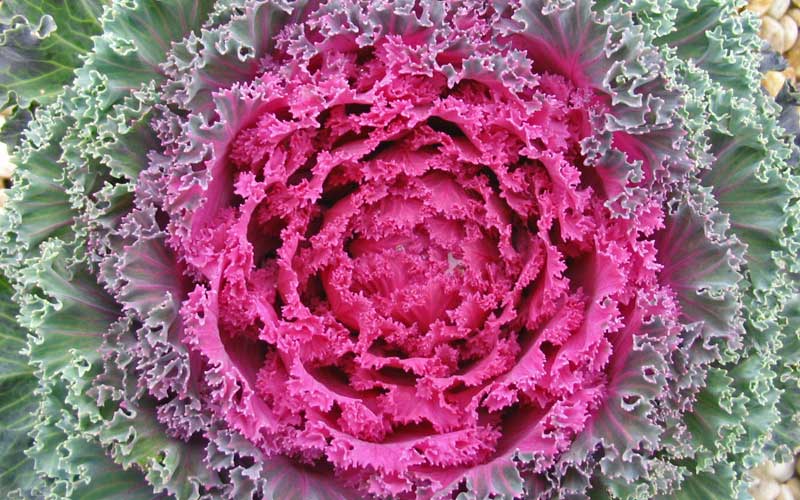 Fall-interest annuals: people are familiar with pansies, ornamental cabbage, and mums as fall-planted annuals.  We still have plenty of pansies and cabbage, while the mums are close to the end of the season.  Pansies give you winter and spring blooms as well as fall (three seasons).

We are seeing an increase in the use of other annuals for fall gardens as well.  You might plant these at the end of August or early-to-mid September for a fall display in-ground or in containers.  Some will tolerate frost: snapdragons caught my eye.  Others have been performing all through the summer heat but have colors that work well in fall and look very nice now (two seasons!).  These include coleus, with leaves of orange, yellow and purple; “Dragon Breath” celosia (cockscomb) with deep red foliage and flowers—truly spectacular; and many types of salvia (ornamental sage) that don’t begin to bloom till late summer but flower heavily through the fall. 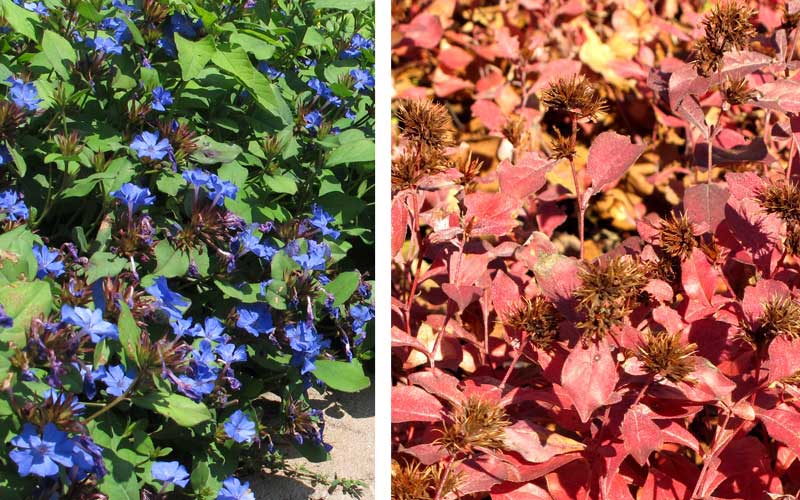 Perennials: the late-blooming perennials are still blooming, the best being the willow-leaf sunflower, Helianthus salicifolius with its cheerful yellow daisies.  ‘Blue Fortune’ Agastache (hummingbird mint; hyssop) in our Perennial Pollinator Garden blooms all summer, and when the old stems are cut down to the ground, a new set of stems (much shorter) blooms through the fall.  Depending on the variety of plant and the severity of the winter, hellebores bloom anywhere from December to March, and the flowers are attractive for several months, giving you winter and spring.  They have evergreen foliage that is nice in summer and fall, so you get four seasons out of this perennial.  Heuchera has attractive foliage from spring to fall, often in fall-resonant colors, and some varieties will give you some winter display (but reduced from other seasons).  Cool weather of spring and fall typically intensify the colors of heuchera.

Plumbago (Ceratostigma) is a ground cover that emerges late in spring, and it flowers sporadically in early summer, increasing as fall approaches.  It is still blooming in a bed here at the garden center, and since it’s a mostly sunny bed, it is developing a deep red fall color to contrast with the deep blue flowers.  Ornamental grasses generally bloom in fall, after giving you a linear (some might say “grass-like”) display of summer foliage which may be variegated, reddish, golden or blue.  Some of the grasses develop red or raspberry fall color as well.  If not cut back in fall, they give a “lone-sentinel in the snow effect” in mild winters. So easily two, and perhaps three, seasons. 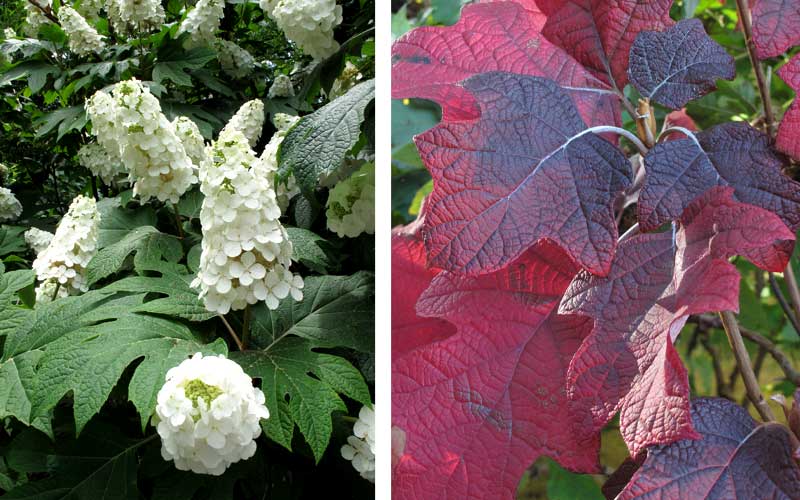 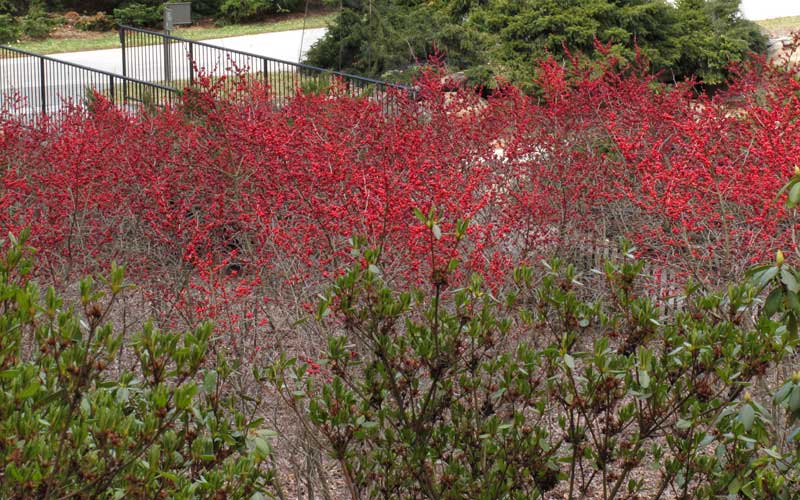 Berry, berry good to me…: Berries really show off in the winter, after the leaves have fallen.  This is when crabapples and hawthorns get their second season, after their spring flowers.  They are guaranteed to bring in birds sometime in the season: flocks of robins or (if you are really lucky) cedar waxwings.  Winterberry holly really is at its best in winter, with its deep-red fruits.  Red chokeberry has white blooms in spring, glossy foliage that turns bright red in autumn, and bright red berries that the birds usually leave alone until well into winter.

Last…in the “look but you’d better not touch” category, a Maryland native vine with white berries in late summer that persist into winter and are eaten by birds.  It’s poison ivy, with glossy green leaves (“of three, let it be”), and attractive fall color.  It’s often the first thing to show fall color in the landscape, with golden to peachy to red leaves climbing up the trunks of trees, contrasting with the still-green leaves of the trees.  Too bad about the blistering and all that.