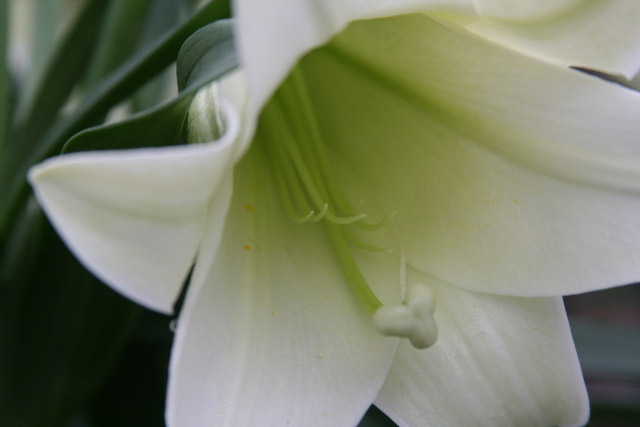 The Easter lily, Lilium longiflorum, is a symbol of the Easter observance all around the world. Well, actually, as it turns out, it’s more of an American tradition. And here is how it came to be.

Lilium longiflorum is native to the southern islands of the Japanese archipelago, and was first described by a western botanist in 1798. Samples were sent to England, and eventually bulbs were sent to Bermuda, where commercial cultivation was carried out in the late 1800’s. As time went by, plant virus problems resulted in the demise of the industry. But, by that time, there was an established market for the bulbs in the United States.

Japanese farmers began to grow the plant for export, and they became the primary supplier until World War II caused an end to trade between Japan and the United States.

It was soon found that the west coast of the United States in the vicinity of the border between Oregon and Washington provided ideal conditions for growing the bulbs. Today, about 11 million bulbs a year are harvested from a handful of farms, clustered at that border. Ninety-five percent of the bulbs are sold in the United States. While this lily is used for cut flower purposes in Europe (for example), its culture as a potted plant for Easter has not caught on there.

This is odd, as it is an excellent plant, offering beauty with its glistening white, fragrant flowers. And it is predictable in culture. Easter is a movable holiday, occurring at the first Sunday after the first full moon after the spring equinox, and as such, changes from year to year (Western Church calendar). Also, the blooming period is shorter than for poinsettias, so growers need to be on their toes when timing the crop.

Be thee neither too early, nor too late. To monitor the crop, the grower goes to the greenhouse every few days, and literally dissects a lily plant, counting the leaves. Based on the stage of development, the temperature of the greenhouse is raised or lowered to control how fast the leaves (and plant and flowers) are developing.

You art lovers out there know that white lilies have been a symbol of the Virgin Mary for a thousand years, showing up in paintings of the Annunciation, for example. This is actually the Madonna Lily, Lilium candidum. This lily is native to western Asia, and over time was cultivated in the Middle East. It was important as an herbal remedy to the Romans, and was used in ceremonies honoring the goddess Juno. It is bandied about that it made its way to northern Europe through the auspices of pilgrims returning from Jerusalem, or as booty from the Crusades. It does not lend itself to pot culture (that is, growing in pots for the Easter holiday), but the similar-in-appearance Lilium longiflorum performs just peachy.

Care of Easter Lilies
While in the house, keep your lily in a comfortably cool room to ensure that the flowers last longer. Water when the soil surface becomes dry to the touch; do not allow the plant to stand in water in a non-draining pot or decorative pot cover. If you want to, you may plant it outside at the end of April in an area of the garden that is sunny or lightly shaded, in a good organic soil. You will probably get flowers the following summer.

Lastly, when the flower opens, the anthers which bear the yellow pollen can stain the flowers. They are easily removed by hand—just grab them and pull gently, the pollen-bearing tops just pop off in your hand. They can also stain clothing, so put them in the trash and wash your hands. Then, go back to your lily, inhale the intense fragrance, and be assured that spring is just around the corner.