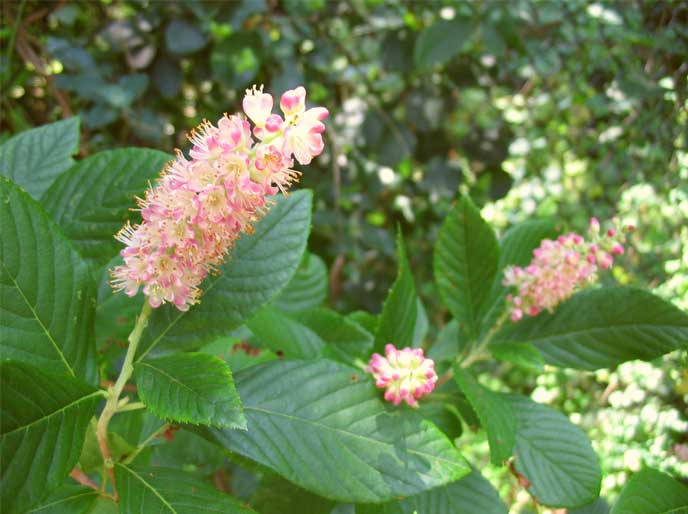 As a plantsperson and amateur naturalist, there are some plants that I am amazed don’t more readily sell themselves for reasons of aesthetic interest and/or wildlife value. I suppose it’s because most people shelter in climate-controlled rooms and do as few errands as possible during the time of year they are at their peak. You can find many of these overlooked gems for sale throughout the season and plant them any time of year, though.  Lots of plants are in this misfit group, but the one that’s on my mind today is Summersweet (Clethra alnifolia), also known as Sweet Pepperbush. As a native to our region, I’ve encountered it in many wild places as I hike and explore. Its name highlights its best feature – it’s sweetly scented (strongly!) and it blooms in the summer.

For those of you who enjoy gardening for wildlife (I don’t know why anyone wouldn’t, but that’s my bias), these are a big draw for pollinators. When I was walking among our plants the other day, the bees were going to town on the open flowers and some butterflies (so far, a Tiger Swallowtail and a Buckeye) were also making a pit stop. Don’t worry about the bees if they make you nervous – they don’t care about your presence (you’re just another obstacle to fly around) and will be solely focused on the ample treats Summersweet must be offering them. When I’ve visited butterfly exhibits during summer, among all the tropical flowers that the designers included to provide nectar, Summersweet is often included, and I’ve always seen butterflies visiting it. 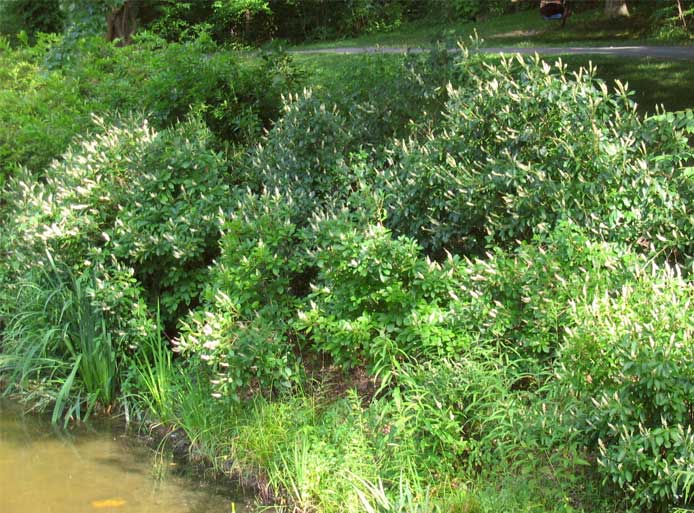 Summersweet is easy to grow so long as it isn’t put in a dry area. In the wild, I’ve seen it in moist roadside ditches, trailside in sandy soil near the shoreline of the Chesapeake Bay, in dappled light in the woods and not far from the edge of a pond. They leaf-out a bit later in spring than most shrubs, which leads inexperienced gardeners to worry that it didn’t survive the winter (they’re hardy all the way down to -30°F); so long as they didn’t get too dry, they’ll be fine. I grant you, they won’t look like much in winter, but hey – that’s what we add evergreens to the garden for.

It’s a great candidate for a rain garden or poorly-drained site, and when thriving, they can sucker a bit to give you a wider patch of coverage. Don’t worry – as far as suckering plants go, they’re quite well-behaved and won’t take over. I like that ability for them to spread a bit because it gives you the opportunity to create a nice naturalized look by mixing in some perennials or other shrubs. Ferns and the grass-like sedges are great companions since both plants thrive in partial shade; many are native. Astilbe, though not native, also likes similar conditions and late-blooming selections would overlap the Summersweet blooms.

Eupatorium is another great companion because, again, they like the same conditions and will draw even more pollinators since they overlap bloom times. Joe-Pye Weed was the first one that came to mind, but really, any of the Eupatorium (or whatever botanists are calling them now) would be a nice combination and the range of heights lets you mix & match with tall or short varieties of Summersweet. If you want to round out your native pollinator magnet garden, add perennial Lobelia (either the red or the blue species): it will also overlap flowering time and be happy in the same soil and light, and add hummingbirds to your medley of visiting pollinators. 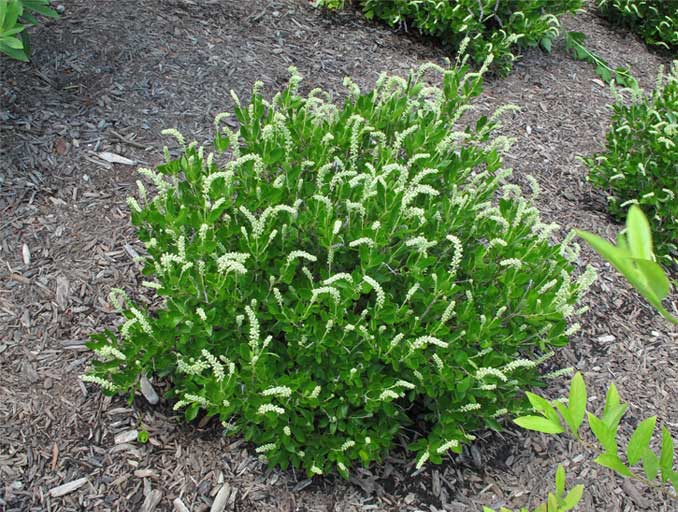 How to care for them: full sun is perfectly fine if they’re not in a dry spot, but they tolerate a decent amount of shade as well. Soil ranging from average moisture to the wetter side of things is fine; as with many things, if we go through a drought and they’re not in a moist spot, give them the occasional soaking to get them through the tough times. Deer will probably leave them alone, as will most insects and diseases.

Pruning isn’t necessary, but if it is desired, do so in late winter because there are no flower buds present yet. Suckers can be removed at any time if you don’t want them spreading. Normal bloom time is several weeks between July and August, and leaves will turn deep yellow before shedding in fall.