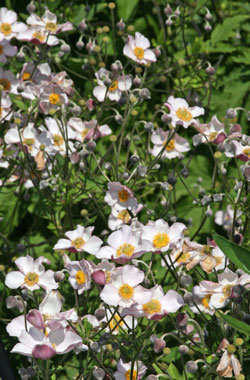 This is the time of year that our perennial department has its best selection of Japanese Anemones. After going through the misery of mid-July to the end of August, when a perennial aficionado is mainly relegated to appreciating the (very) subtle differences between hosta cultivars*, the anemones provide welcomed relief.

Borne on tall stems, the flowers wave seductively in the breeze, and remind you that autumn can be a rewarding time in the garden. If you plant them in a location with shade in the afternoon, and don’t let them dry out, then they will spread over time and make a nice planting.

Consider planting several cultivars and they may weave together to give a mixture of colors. Color-wise, they are all compatible, coming only in pure white or various shades of pink. There are only ten or twelve commonly-offered cultivars, so selection of one that is just right for you is relatively easy.

Once called Anemone japonica, Anemone tomentosa, and a few other species, the various plants offered in horticulture are now considered to be hybrids of several species, and the official name for most of them is Anemone x hybrida, followed by some catchy cultivar name like ‘Honorine Jobert’. At least that is what Dr. Allan Armitage says in his book, Herbaceous Perennial Plants, and that’s good enough for me.

The foliage spends the summer in a mound about a foot tall. The flowers appear on tall stalks in late summer or fall. The taller cultivars may need staking when in flower, but that can be avoided by not growing them too well; that is, don’t over-fertilize, and let them stress a bit (wilt just a little) before watering in the dry times. This will result in shorter and stronger flower stems. 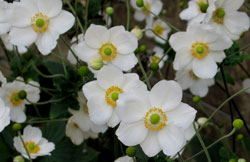 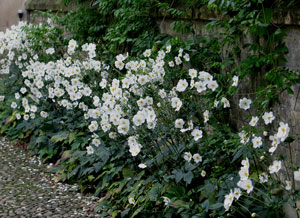 *[A cultivar is a cultivated variety, an example being ‘Golden Delicious’ apples. A variety is a variation in a species of plant that occurs in nature. It’s different from the species but not enough to be considered a new species; maybe the leaves are a different shape or something. A cultivated variety is the result of some sort of horticultural hanky-panky, such as taking cuttings. This is to keep all of the offspring identical. They all come from one original unique plant that someone found somewhere or bred, named as a cultivar, and propagated. ]