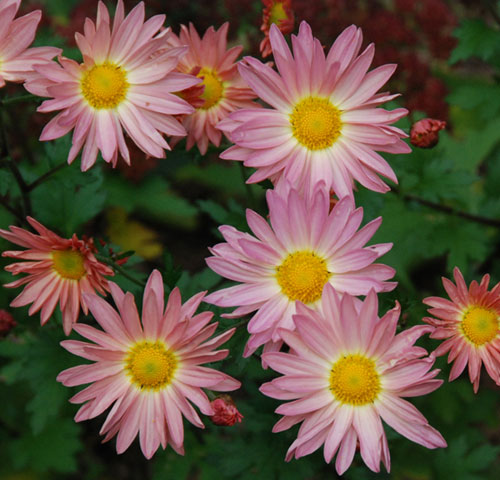 Everyone is familiar with the garden mum; we sell tens of thousands of them every fall. Nothing says ”fall is here” better than a couple of mums at your front door, although you will have to bend over and listen closely to hear them. In order to produce the heavy blooming, color range, and double flowers that people crave for their decorating, the vigor has been bred out of these mums, and they are generally treated as annuals, as they are unlikely to survive the winter. That’s why we grow them and sell them through our annual department. No one expects them to survive and thrive from year to year.

Not to take away from these mums, but in our perennial department, we have some cultivars that are good garden subjects; good lookin’ and likely to return year after year. These are loosely called “Korean Mums” and our friend the internet is not exactly overflowing with information on their background. A nurseryman named Alex Cummings bred mums in Connecticut in the 1930’s and some of these plants date back to his work. These special plants are being offered in the perennial department; they will be on a different sales track than the garden mums in terms of pricing, when they are on “sale” and so on, so we apologize for any confusion that may erupt at the cash registers.

On the name: a few years ago, the plant taxonomists (people who deal with how plants are related to each other and how they should be named) decided that garden mums should be more properly called Dendranthemum. 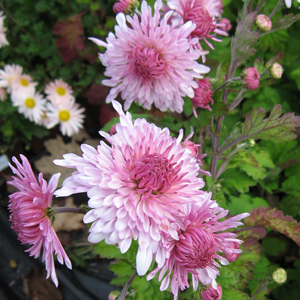 Then, they decided to switch it back to Chrysanthemum. We horticulturists out on the fringes here in the retail world who worry about things like what do we do with piles of plant labels, are slow to make these changes. So, we are still using Dendranthemum, at least this season.

One of our network of perennial growers, Sunny Border Nurseries, coincidentally located in Connecticut, is offering a number of these cultivars for sale this year, and I am bringing seven cultivars in for fall. Five of them should be here by Labor Day Weekend, in fact. They are still “green,” flowers expected in October, thanks for waiting, we will be with you shortly. They will tolerate light frosts, so late-season blooming is not a problem. Their strong stems do not require staking.

When Behnke’s had a perennial stock garden (a garden for growing plants for cuttings for propagation) at a nursery we had at Largo, MD many years ago, we had several of these cultivars planted in the garden. They were vigorous, showy, returned reliably year after year, and were pretty much carefree. Great for late-season color and also good for cut flowers. They need sun all day to bloom their best and have those strong stems, and well-draining soil so they don’t rot out in the winter. 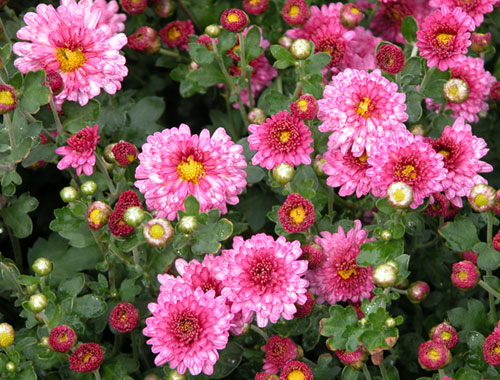 When I say “single” flowers, I mean it looks like a daisy. Double flowers look like the classic “cushion” garden mum flower.

• ‘Venus’ is one of the oldies: described as achieving a height of 24 inches with single pink flowers.
• ‘Sheffield’ aka Sheffield Pink aka Hillside Pink Sheffield aka Single Apricot aka Johnnie the Razor; gets to 36 inches tall, with single flowers of pale peachy pink. I just made the last name up in the quest for edgy horticultural humor. That’s a ‘Sheffield’ in the top photo.
• ‘Samba’ grows to 18 inches, with 2 inch wide, rose-pink single flowers. Blooms earlier than the above.
• ‘Mei-Kyo’ grows to 3 feet, flowering very late—Sunny Border says mid-October until Christmas—with small double lavender flowers.  That’s an ‘Mei-Kyo’ in the lowest photo.
• ‘Emperor of China’ grows to 3 to 4 feet with silvery rose-pink double flowers. Foliage takes on red tones in the fall. China is next to Korea. Pictured on the right.
• ‘Cambodian Queen’ grows 12 to 18 inches in height, with single deep pink flowers. Cambodia is on the same continent as Korea.
• ‘Brandywine Sunset’ is a new cultivar growing to 36 inches tall and has single “peach blushed” flowers from late summer into fall. Brandywine is, well, ummm…if you dug a hole through the center of the earth, you would come out somewhere in the vicinity of Korea. (Not coming in on the first shipment.)

A well-known (even I know her!) garden designer and writer from Ohio, Bobbi Schwartz, has a nicely illustrated article on a plethora of hardy fall mums including some of the above, visible at www.finegardening.com.

The article originally appeared in the terrific gardening magazine, Fine Gardening, a worthwhile investment with a wide range of articles for beginners to pros. For a little info on Chrysanthemum taxonomy, try Wikipedia: Chrysanthemum.