On special this week in our perennial department is the entire selection of Dianthus. Garden dianthus are commonly called pinks, because the edges of the petals are often notched as if cut with a pinking shears. Dianthus is one of the mainstays of the “English Cottage Garden” look, which points you in the direction of their siting and care. 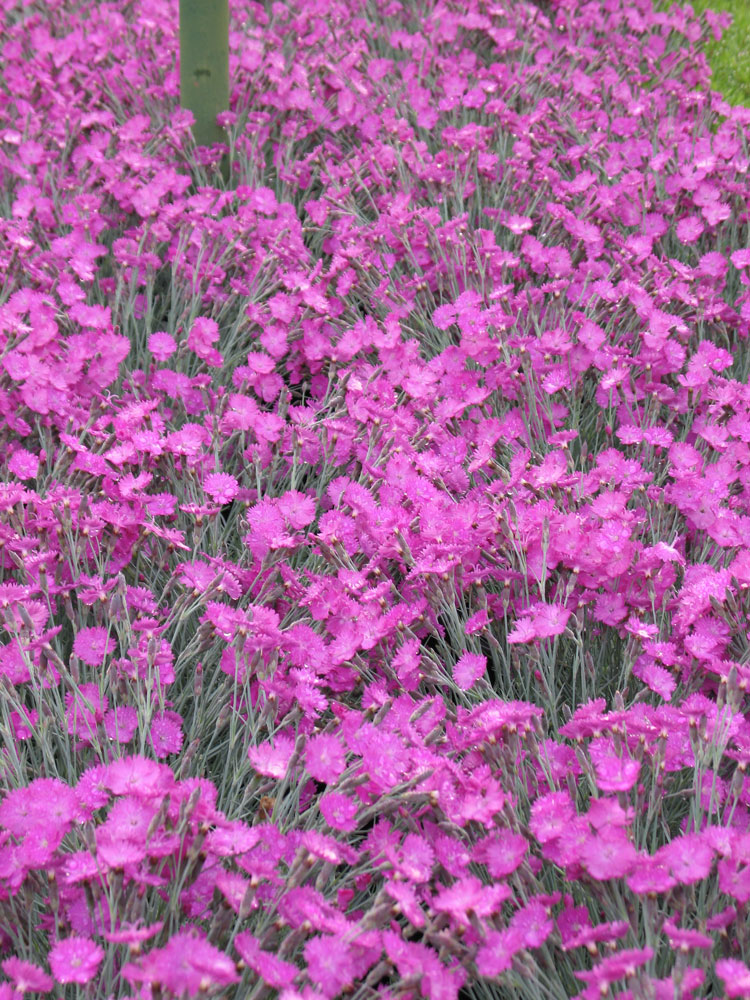 In our area, the pinks give their best bloom in spring—April, May, early June. Sometimes they cough up a few flowers in the summer and fall as well, especially in cooler years. As perennials go, they tend to be short-lived. You may find that they need to be replaced after several years.
They offer pink, red, white or bi-colored flowers, often very fragrant. Carnations, the cut flower, are a type of dianthus, so that might give you a sense of the fragrance. (Carnations are not good garden plants, but if you use your imagination, some of the double pinks look like wee carnations.)

Many of the cultivars offer silver or blue evergreen foliage, which can be attractive when the plant is not in bloom. We found over the years that an older variety, ‘Bath’s Pink,’ can make a good silver ground cover for small areas. Our most popular dianthus is ‘Feuerhexe’ or “Fire Witch,” bearing electric pink flowers on blue foliage. It was the Perennial Plant Association’s Perennial of the Year a few years back. This time of the year we generally have a dozen or more cultivars in stock, with the early ones like ‘Fire Witch’ and ‘Tiny Rubies’ just coming into bloom now.

Plant them in containers, or on a slope, or in a raised bed… somewhere with good drainage. Sodden winter soil will kill them. Add a little lime to the soil when you plant, and site them in a sunny spot. As with many perennials, if you have a chance to pluck off the dead flowers, it will encourage the plant to send up additional blooms, extending the flowering season. My experience is that they go more or less heat dormant in the hottest part of summer, sending out new growth starting early to mid-September. The new growth will have more intense blue/silver foliage. Don’t prune, trim, cut back, etc during July and August. Do it in the early fall.

As I age, I am becoming more and more fond of fragrant flowers. (This is a change over time. I used to be a hardcore horticulturist, interested in flowers that look and smell like rotten meat and are pollinated by flies and carrion beetles. I’m still interested, but no longer want them in the garden. Much to the relief of the neighbors.) If I didn’t happen to own a wooded lot without much sun, you can bet that I’d save some space for the pinks. Perhaps at that retirement cottage we plants people all dream about…