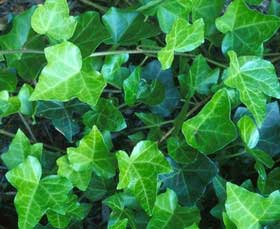 We have a little confession to make. Behnke Nurseries exists to sell plants. We do go to a lot of effort to try to sell you the right plant for the right place, but the emphasis is on sell. We thus have conflicting goals when it comes to English ivy.

English ivy is a great plant: it’s shade tolerant, not particularly disease or insect prone, and easy to propagate. You more-or-less plant it and forget it, that is, until it starts to grow where you don’t want it—climbing your trees, climbing up the side of your house, and so on.

English ivy is an “easy sell.” Customers come in specifically asking for it; landscape designers specify it in large numbers on their plans; salespeople can recommend it without much fear of anything going wrong. The problem is that, unless maintained, over the years it will escape cultivation and move into parklands. (It flowers and goes to seed when it climbs and becomes mature; birds spread the seed.)

In parklands ivy smothers out native forest floor plants, climbs and shades out shrubs, and damages trees with its added weight. So when we sell English ivy, we are like the agonized cartoon character with an angel and a devil on alternate shoulders: (“Sell it!” “Don’t sell it!!” “Shut up!” “Shut up!”)

We herewith are pleased to list alternative recommendations to ivy for use as a ground cover in the shade, with the hope that you, the consumer who drives the market, will drive a more environmentally friendly plant. So to speak.

For large areas, we recommend Japanese pachysandra (Pachysandra terminalis). Short, evergreen and tough, it does not appear to spread beyond its bounds, and pricewise, runs in the same league as English ivy.

Liriope, or lily turf, is taller, and has the advantage of having spikes of small, attractive purple or white flowers. One species, Liriope spicata, does seem to spread some by seed and runners, although this seems to be a problem further south of here. Most of the cultivars we carry are “clumpers” and fill in but don’t run. For example, ‘Silvery Midget’ is a nice, golden-variegated dwarf, while ‘Monroe’s White’ has white flowers.

Vinca minor, or periwinkle, is a low-spreading evergreen with blue, purple or white flowers. It shows up on some invasive plant lists, and is even sometimes “wild collected” as a “wildflower.” As a substitute for ivy, however, “it may be invasive, but at least it doesn’t climb trees,” to quote an acquaintance from the Maryland Department of Agriculture.

For smaller areas, there are many interesting choices. The Eastern Allegheny pachysandra (Pachysandra procumbens), native to the US but not Maryland, has a subtle silvery blaze over gray-green leaves. Although not reliably evergreen, it does have reasonably showy spikes of tiny white flowers borne in early spring before new leaves appear.

Hostas, while not evergreen, certainly are a terrific shady ground cover for folks who don’t have deer troubles. Grown primarily for their leaves, hostas make a dense crown that holds soil well even when the plant is dormant. We carry 100 cultivars, including some inexpensive types in large (2 gallon) pots. Although it has a plain green leaf, the old-fashioned Hosta lancifolia makes an effective ground cover or edger for the whole season.

Epimedium, or bishop’s hat, is a more or less evergreen shade perennial that slowly spreads and forms a dense cover. They have beautiful columbine-like flowers (yellow, pink, red, orange, lavender) in early spring. They’re a hard sell, however, being relatively expensive and not “showing well” in a pot. The young plants look a little scrawny and don’t flower well. Yet this plant would show up on most horticulturists’ favorite plant list.

One of the hardy geraniums, Geranium macrrorhizum, has been in my garden for almost 20 years. It is in an area of deep, dry shade (but good soil). It is evergreen, six to eight inches tall, has pink or white flowers in spring, and strongly herbal-scented foliage. It spreads with above-ground stems, and is easy to control (just cut it back once a season).

Foamflower (Tiarella species and hybrids) offers some great evergreen plants, both clumpers and spreaders. They bear white (or light pink) flowers in spring, tolerate shade, and prefer moist soil. Tiarella cordifolia, an evergreen native, self-seeds at the edge of my yard in a drainage swale and has made a dense patch.

Many ferns make nice covers, especially the Christmas fern, Polystichum acrostichoides, which has dark, graceful leaves, looking much like the houseplant, the Boston fern. It is evergreen and deer are not frond of them (hee hee hee). Another good one is the evergreen wood fern, Dryopteris marginalis.

These are just some of the possibilities for ivy substitutions. For more information regarding the problems caused by invasive species start at the following websites: www.nature.org/invasives, www.invasive.org, or www.ma-eppc.org. Also see our Chairman of the Board, John Peter Thompsons personal blog on Invasive Species, “Invasive Notes”