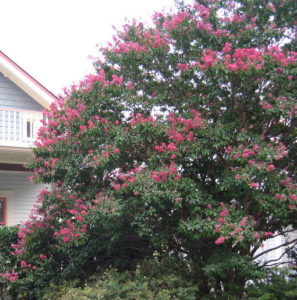 There’s been lots of news lately about the effects of climate change on our gardens and oddly, it’s usually presented as good news to gardeners. They’re shown rejoicing over the warm-climate plants they can now grow, like crape myrtles in Upstate New York. BUT:

The life cycles of insects, including the beneficial ones that keep others in check, may become out of synch with their prey. Pollinators, like the disappearing honeybees, may already be out of synch with the plants they feed on. Science Magazine reported in 2001 that earlier flowering and fruiting has caused such a disconnect for some long-distance migrating birds, who depend on food availability at the same time each year. And to make everything worse, most climate modelers predict more flooding and drought.

Even English Gardens are Adapting

To see how gardeners might adapt to all this change, let’s look first at what’s happening in England, a nation of gardeners. Last summer their southeast region had such a severe drought that sprinklers were banned. With more and longer droughts predicted, it’s clear that the very hallmarks of English gardening are now threatened — their traditional lawns and flower borders.

Thus the U.K. Environmental Minister is urging everyone to change their water usage, plant choice (look for drought- and heat-tolerance), and garden design — in other words, change everything they’re doing. No more roses and delphiniums. The use of gas-powered garden equipment is discouraged. Rain barrels are recommended, as are carbon-sequestering cover crops, like clover and winter rye. Brits are being given at least one bit of advise that fits their culture: plant roots are darn good at absorbing carbon dioxide, so plant more of them.

Here in the U.S. we see the mainstream gardening media beginning to respond, with both Martha Stewart and Better Homes and Gardens advocating less gas mower and blower usage. Gardening authorities across the U.S. are offering these very good suggestions: add organic matter to make your soil hold moisture better, plant shade trees on the south side of your home to reduce air conditioning loads, and do your planting in fall or early spring. Even turfgrasses can be damaged by the freeze-and-thaw events we’re experiencing, especially where there’s standing water, so we’re being told to fix our drainage problems.

Research has really just begun, but here are the kinds of plants being recommended by gardening experts in response to global climate change:

Perennials from Mediterranean climates, which thrive without summer rain. Examples are such beautiful and useful plants as lavender, rosemary, sage, catmint, oregano, and thyme. The herb agastache flowers nonstop through the summer and is beloved by bees, and red agastache is a magnet for hummingbirds. Locally native plants are particularly good for sustaining wildlife, but be sure to ask for ones that will survive the new climatic conditions.

Choose trees and shrubs that do well across many temperature zones. Some have seeds that can shift strategies quickly, rather than the generations it usually takes for most trees to adapt to new conditions, which makes them so vulnerable to climate change. Oakleaf hydrangea, serviceberries, deciduous magnolias and many pines are especially adaptable to a range of conditions. Again, the science is evolving, with experts at Cornell currently saying they haven’t yet seen changes that cause long-term damage to trees and shrubs.

To borrow from one of the central tenets of organic gardening, the first goal of gardening should be to do not harm. Here are some ways:

The last time the U.S. Department of Agriculture amended its famous map of zones (bands of land that share the same winter low temperature), was 1990 and a promised update has been delayed. One wonders why. Is it because, as a spokesperson said recently on EarthBeat Radio, the mappers are in Iraq with their tours extended indefinitely? Many suspect another reason — that the Bush administration is trying to avoid documenting more proof of global warming. It didn’t help that the USDA rejected the map update done for them by the American Horticulture Society, and their explanations have been less than convincing.

Fortunately, someone stepped in to fill the void. The National Arbor Day Foundation recently released its own updated map, which shows many places a full zone warmer than in 1990, which means their low temperatures are now 10 degrees warmer.

More On-line Info about Climate Change in the Garden