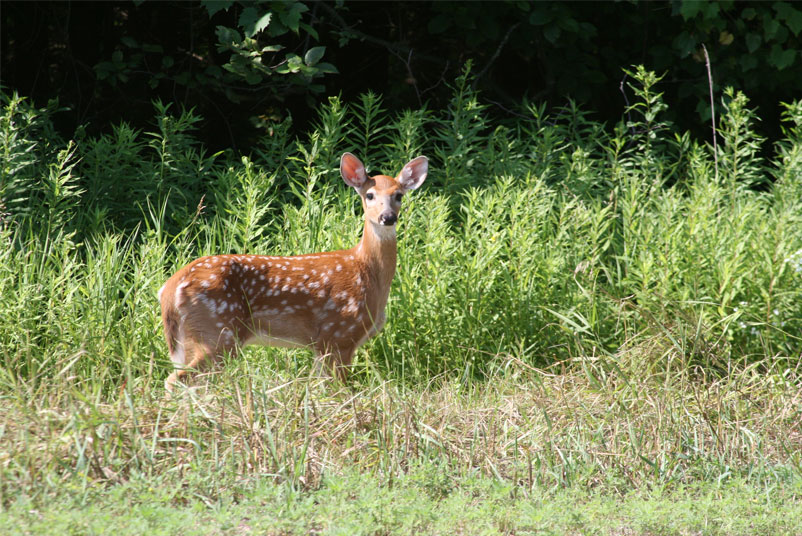 Have you noticed that spring is coming?  Buds will be popping and bulbs and perennials will be emerging from their winter dormancy.  For deer, this is like putting up a sign saying, “All You Can Eat: Free! Bring the Kids!”

After a pretty boring winter of subsisting on twigs, evergreens and maybe birdseed, they are eager to put on some weight with all the goodies popping up in your yard, aka their dining room.  They will be wandering the neighborhood, looking for those places where the food is plentiful and tasty, and, being creatures of habit, they will tend to prowl the same areas all the way till next fall, when they look for their winter-feeding areas.

That’s why this is the time to start applying deer repellent. Train them early that your azalea foliage or your emerging perennials are not tasty.  I did my first application this morning, focusing on the azaleas, since there wasn’t all that much out yet. I’ll spray again in a week or two and catch the early perennials and the leafing-out shrubs.  I’ll spray two weeks or so after that, and get the hostas and daylilies, and two weeks after that, at which point I should have hit everything a couple of times.

It’s best to rotate through a couple of different repellants, although I personally like the ones that don’t smell so bad that they make me gag. I’m on a fairly small lot, and I also don’t want to annoy the neighbors who may be opening their windows to air out the house, only to discover that their crazy plant-neighbor has stink-bombed the back yard.

They mostly have rotten eggs somewhere in the mix, but some of them mask it with clove oil or other fragrances.  Our garden shop staff can direct you to the ones they think are most effective, stinky or not. I’ve been using Deer Solution and Deer Stopper, with an occasional application of something a little smellier, like Bobbex.

Repellents may do the job by themselves if you don’t have a big problem.  They are best used: at the right time, in rotation, and in conjunction with a long-term plan of planting deer-resistant plants, and fencing where practical.  This year, we have been seeing a herd of ten, which is the biggest we have seen so far so we’ll see what happens.

My back yard is fenced although it’s only 5 to 6 feet, which they could leap if in the mood.  Over the years I have moved most of the hostas from the front to the back, and replaced them with hellebores. And whenever I see the deer, I go out and glare at them and say something threatening like “shoo, shoo”, which if nothing else, confuses them.