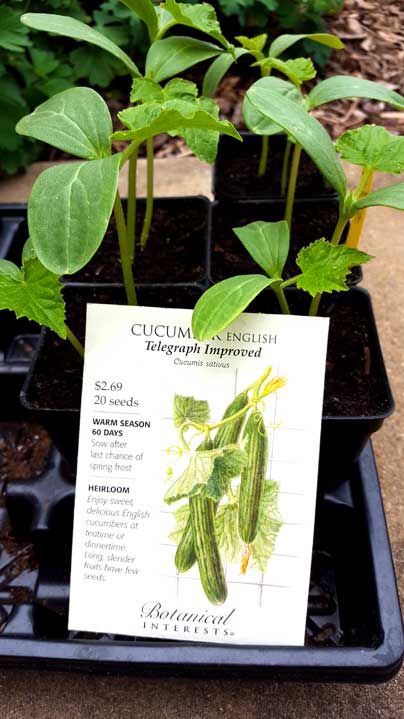 A few weeks ago while deciding what we wanted to plant in the garden my husband suggested to our grandson Aaron that a few cucumbers might be nice.  “Well, only if they don’t have any seeds in them, Granddad,” was the response we got. We looked at each other in slight confusion and for a moment I actually wondered if my daughter took all the seeds out the cucumbers.

The next day in the grocery store I happened to see these long skinny wrapped up cucumbers that said ‘Seedless.”   Go figure!  So onto Google I went and found out that while, yes, they do have seeds, English cucumbers are considered seedless.  Apparently not all cucumber have those big old seeds in them, many are actually bred to have underdeveloped seeds that are similar to seedless watermelons. Some of them are also bred to be “burpless.”  The English cucumber is now one of the most popular eating cucumbers in the world.

Since it was early in May that this discussion was going on about what to put in the garden, at that time our local vegetable plant growers did not have any of the English cucumber plants ready for Behnke’s to stock (and they sell out pretty fast when we get them in).  At that point I went to our Garden Shop and started checking out all the different seeds we carry. There it was! Score! The last pack of English cucumbers!

Aaron and his grandfather planted the seeds, watched them grow and now the plants are ready to be planted in the garden.  Aaron is beyond happy about it, and we are just wondering how we went through life without ever eating a seedless cucumber!

Getting your little ones involved in the actual choices and decision on what to put in the garden is a win- win for everyone. You get togetherness and major discussions on just how good home-grown is, and you even might learn a little something from them.  Now to just get him to want to help weed.