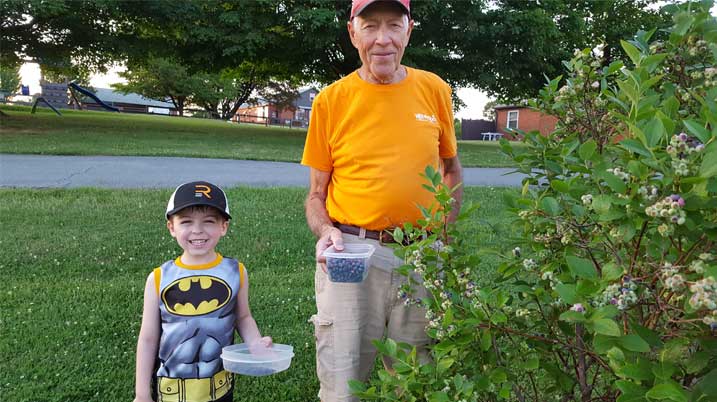 I’m pretty sure I have written about my in-laws’ wonderful blueberry bush (at least once), but after picking berries with my husband, father-in-law and grandson the other night. I thought I would share a little about this bush.

This bush is taller than we are and through the years has helped make many a blueberry pie and roly-poly, not to mention just yummy berries to eat while we pick. When I first got married and we moved next door, it was always a relaxing time in the evenings to be out there with my children and my in-laws picking these sweet berries. As time went on, my in-laws moved (still next door though) and my daughter and her husband bought their home with the fabled blueberry bush.

Now we’ve added a generation to the picking party with the addition of our grandson, asking as he picks, “is this one okay?”  What a great time we had with him chattering away about his day and all the things he plans to do.  I know that in a year or two, his sister Zoe will be old enough to help.  Many folks ask if we cover this bush with netting.  And the answer is we never have.  There are more than enough blueberries to share with the birds each year. Plus of course, we get out there and pick, pick, pick!

In 9″x12″ glass baking dish dump blueberries, sprinkle with sugar and tapioca. Mix together other ingredients. Drop spoonfuls over blueberries and spread over top. Bake at 400 degrees for 15 minutes. Reduce heat to 350 degrees and bake 10 minutes or until top is done. Other fruits may be substituted.